This is the second installment in a three-part series of dispatches from Mount Merapi in Indonesia. Read Part 1 here. 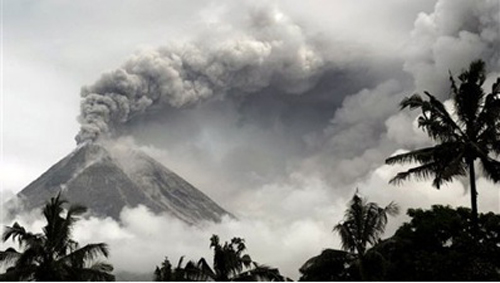 Now Sandra seemed frozen in shock, and we had no supplies for reviving him. George used some bedside manner, talking cheerfully in a tongue Sandra couldn't understand, but a tone he could. After a few minutes he came around, and seemed ready to backtrack to the north side, back to Selo. George took the lead, and we stumbled along the caldera rim, but then dropped off its side to the neck of the volcano, where the going seemed easier. We traced a line that dropped diagonally, calculating it would at some point intersect the path that descended to Selo, but the going was slow over the dreary lunar landscape. After a while we were crossing a steep gully created by a lava flow, tripping on the blue, metal-like shards of basalt and creating little avalanches. Midway we stopped for a respite and a draw of water.

As we sat down, for a fleeting moment the clouds cleared and an enormous view spilled before our eyes. We could see down the gully, which soon turned to a full-bodied canyon, all the way down to the alluvial plains, where the glass of flooded rice fields reflected like a hundred black and silver mirrors, looking as warm and shining as tears of joy scattered upon a pristine earth. On the north wall of the canyon a palisade of towering, columnar basalt cliffs hung over an inviting passageway to what appeared to be a Garden of Eden, compared to our immediate primeval setting, paved by what could be the maria of the moon.

Not of course the original Garden of Eden, though the remains of Java Man, the celebrated pithecanthropus erectus, were discovered in the lowlands on this side of Merapi in 1891. Probably a million years old, and one of the earliest known hominid fossils, Java Man died out when Java was still an integral part of the Asian mainland. The earth here is always moving, always reshaping, always creating and destroying.

As quickly as the clouds parted they shut their overcoat and locked us in gray. But now we had the impetus for a decision: to continue our traverse along this saw-toothed cowl back to the northern path we'd originally ascended, or head directly down this southeastern canyon to the Elysian fields we glimpsed below, from where we could walk or hitch to Kinahrejo, and perhaps even meet our schedule. We decided to try the untried route, and stepped down toward the canyon.

We didn't get far before our first incident. Sandra, still recovering from shock, was following us in a sort of Walking Dead stiff trance, when he suddenly stopped and started to bellow and point. We scrambled back up to him, and he kept babbling something about a man on the other side of the gully we had to speak with. But nobody was there. Sandra was hallucinating.
Again, George went to work with his talking cure. Within minutes Sandra was ambulatory and we were glissading down the lava-rubble slope into the canyon.

As we descended the canyon's floor constricted while its walls vaulted into a mackerel sky. It was as though we were negotiating some oversized, sinuous arroyo in Utah's Canyonlands, awash with dry waterfalls down which we had to climb, jamming hands into cracks and levering weight on small footholds in free-climbing maneuvers, as the infamous canyoneer Aron Ralston did in the minutes before he fell, became trapped by a boulder, and after 127 hours, self-amputated his arm.

The sloping floor of the canyon was coated with a sheet of lava gravel, and at one point George slipped and fell on his side, dislocating his shoulder. He shrieked and writhed in pain as I ran to help, but before I reached him he was able to pop it back. George and I exchanged blunt glances....this was no place for an emergency.

As we progressed we found ourselves climbing down steeper and higher dry waterfalls, most of which provided a fissure, a runnel, a pleat of rock or an overhanging crag that allowed a relatively easy descent. But one ten-meter cascade had too much exposure for my taste, and I demurred as Sandra took the challenge. Sandra was an excellent climber, and he rallied whenever a rock gauntlet was tossed in our path. On this occasion he bargained his way down a hair crack with ease. George followed, and almost fell. I was unwilling to take the chance, so I went upstairs, into the jungle that had emerged on the rim. This may not have been the better route, as the rain forest was so thick I had to do a desperate breast stroke through a curtain of creepers for half a kilometer before I found an entry back to the canyon. Joining the others, I checked my pocket and found my flashlight had been pulled out by some jungle claw. Not to worry, I thought. We'll be back to electric lights by nightfall.

We didn't travel far, however, before we came to another impasse, this one a 15-meter cliff broken by a two-tiered flume of polished rock that ended at the brink of another 10-meter fall. The flume looked like a kiddie slide, only with radical consequences if we didn't stop in time. Sandra again volunteered to go first, and he careened down as smoothly as though the slide were in his own backyards. I positioned myself to go next, but insisted Sandra brace himself at the slide's end to arrest my fall, as my body weight was almost twice Sandra's, and I feared with the added mass the extra momentum would pitch me over the second cliff. Sure enough, I careened down the slide out of control and smacked Sandra at the bottom, almost knocking him off the edge. With a sigh of relief, I moved out of the way as George lined up next, then barreled down like a runaway truck. Halfway down, George stuck out his arm to slow his descent and twisted his upper body, which again dislocated his shoulder. His face contorted in pain, George crashed into Sandra and teetered on the brink of the vertical drop. George screamed a scream that echoed up and down the canyon, then convulsed, trying to reach across his chest and re-set his shoulder. He and Sandra squirmed on the very edge of the drop, George out of control, Sandra trying to find a handhold. I reached into the welter to help George, but couldn't get purchase on his palsied shoulder. His eyes flittered to the top of his head, and it seemed he was about to pass out. I looked back up the slide, but there was no way back; we had committed ourselves to the canyon by sliding down the flume. The walls were sheer, and we could only continue down the canyon to the exit, if indeed there were an exit.

We were ill-prepared -- without backup or the correct equipment. It is a too common and tragic thread to adventure stories. I had been in Oregon some years ago when seven students and two adults died while on a day trip up Mount Hood when an unseasonal storm swept in. As if to mock my thoughts, it started to rain. We were in a flash-flood canyon, not unlike many I had traversed in the Grand Canyon during my days as a guide. If Merapi so willed, it could wipe us out, without a trace, in a trice.

As Sandra and I struggled with George on the edge of the cliff there was a pistol-like "pop," and George collapsed in release. The shoulder was reset.

With George back in action we started working our way down the bleak chasm again, now torn between the merits of a slow, cautious descent, and a quick attempt at escape to outrun a possible flash flood.

But the rain let up; the clouds pulled back to allow another view of the valley. Only this time it was a disappointment, as the jade-green paddies looked no closer than the first glimpse, and it was now 3:30 in the afternoon.

The gorge pinched, getting narrower and tighter. Around 4:00 we hit the hiker's nightmare: a 20-meter pitch into darkness, a plunge simple and sheer that cut across the canyon floor. There were no nubbins, no toe holds, no cracks or crannies. The walls on either side stretched 500 meters up into the sides of green peaks, mini-volcanoes growing like pimples on Merapi's chin. Trapped, we were, in a deep scar on Merapi's pocked face.

Smack in the middle of the most overpopulated piece of the planet there was not a soul in sight, not a trace of a human, or his works, in any direction.

As an expert mountaineer, Sandra refused to believe the finality of a dead end, and scrambled back and forth at the lip, examining the rock, searching for some secret passageway. But after a thorough inspection, even he gave up.

More:
travelIndonesiavolcano
Newsletter Sign Up
An essential daily guide to achieving the good life
Subscribe to our lifestyle email.
Successfully Subscribed!
Realness delivered to your inbox