With an eerie chill of awe and reverence, I trace my fingers along the words printed on the 72 year-old telegram resting in my lap, now yellowed and contained under a sheet of plastic: "[We] regret to inform you that your son was seriously wounded in action in France eight December."

The year was 1944, and 70 million tender souls had been summoned to serve in the armed forces of the Allied and Axis Nations. Some would kiss their mothers goodbye, never to stand on native soil again. Others would return - months or years into the future - eager to fill the pages of journals, scrapbooks and the ears of their offspring.

While nearly all stories would be dripping with varying degrees of ferocious bloodshed, some would be fertile with legends of a different breed: soul-stirring tales of human connection overpowering the conflicts of war.

I am going to share with you one of them.

In a blacked-out jeep blazing and swirling across the muddy roads on the outskirts of Luneville, France, an auxiliary fire lighting up the darkness surrounding him, American soldier James Howell Peebles, age 23, was transported into action on Halloween night.

One minute he was shoulder-to-shoulder with one of his fellow combats. The next he was darting across the muddy field and cowering into a foxhole - dug by the hands of a stranger who had already come and gone.

As the guns fired, the ground quaked and trembled beneath his feet. This moment was a "crossing over" of sorts; it marked his official entrance into war. 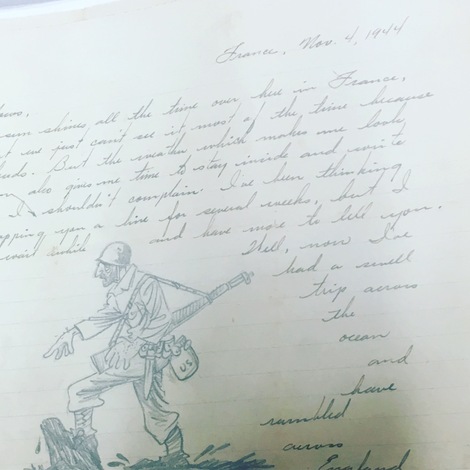 The sight of Messerschmitt 109 German Fighter fighter planes crashed and scattered among the grounds he walked upon each day would soon become commonplace, however. And, he would learn that no man's psyche - regardless of how well-armored - was safe from being harmed by war's perplexities.

One brave sergeant in particular made quite an impression with his blend of compassion and fortitude. "If a soldier were struggling with foot pain, he would take their weapons and heavy load from them," recalls Peebles, fondly.

One night, however, while the unit was under massive fire, the sergeant vanished behind the brush before suddenly reappearing. But, this time a foreign wildness had overtaken him.

He bolted across the muddy terrain in a frantic, hurling a blend of howl and shrill, "I can't do this! I can't take it. I'm going to get out of this!"

Although the reality of death was ever-looming over them all like a phantom, it had swept in and conquered this otherwise courageous sergeant - like a snapping branch in a turbulent storm.

But, it would not be the only instance Peebles would spend more than 70 years unable to forget.

One afternoon, like many others, he wandered out of the muddy line to fill his canteen. He moved to the edge of the field where the water was so crystal clear, the grass could be seen swaying beneath it - as though offering a glimpse of serenity amongst the chaos.

Upon quenching his thirst, he turned his gaze upward. There before him were a row of German bodies hanging over the fence in bloody defeat.

Although uncertain if his gunfire had been responsible for ending any of their lives, the sight before him served as a gut-piercing manifestation of the monstrous conflict for which he had been assigned. This moment became Peebles' "most vivid picture of death."

Until it, too, brushed up against him.

It was December 7, 1944 - a snowy Thursday morning near Valkenburg, France. Peebles was struck by an explosion of mortar fragments in the left side of his chest and in his right thigh. His body relented to the ground with a hard clunk.

Within minutes, a medic rushed to him - sprinkling sulfur powder onto his wound, pulling his ammunition bag up under his head, securing his raincoat over his chest and, finally, inserting his rifle into the ground. "I was not provided morphine because morphine was only given to those who were less likely to be a casualty," said Peebles.

The chill in the air was biting and unmerciful, and many times he dipped below the threshold of consciousness before resurfacing to the cold yet again. Each time - upon his return - he was greeted by the unrelenting rocketing of gunfire.

And, he would lie there all day with his rifle standing upright in the muddy earth alongside him, serving as both his companion and indication to all that his hours - perhaps minutes - were a dwindling number.

Shortly after 4 p.m., once darkness had swallowed every trace of the day, he heard a shuffle of feet approaching from the distance. Peebles called out to the noise, declaring that he was still alive.

Immediately, their voices sliced through the night air. "Ssshhh!" they exclaimed with a cutting whisper. "We don't know if the Germans are out here!"

The men loaded his wounded body onto the litter and carried him to the road, dodging and trampling upon shells and craters. A few days and a surgery later, he landed at Ravenel Hospital in Mirecourt, France. 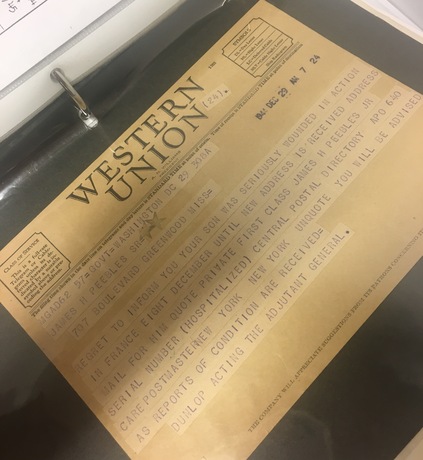 Upon arrival, he was surprised to learn he would be occupying the hospital with not only fellow American wounded, but also German wounded. And, his care would be provided by both American and German nurses.

Eye contact was seldom exchanged between the enemies. Nevertheless, there they were - embodying that space in their glorious fragility: Confined within the same ward, eating the same meals and being administered the same shots of penicillin.

Pre-war college studies had granted Peebles modest familiarity with the German language, and it would prove to be valuable over the weeks to come. "I became the informal interpreter between the American staff and the German nurses," Peebles recalls, pridefully.

In between serving his lunches, changing his bed linens, administering medications and providing "wonderfully reviving back rubs," a few of the German staff began unveiling their own forebodings and sorrows for Peebles.

His most compelling interactions were shared with Nurse Martha Mueller, who had been captured with her hospital in Strasbourg. One day, Nurse Mueller leaned into his bedside and shared a photograph of her soldier husband who had been fighting on the Russian front. Weeks were racing and Christmas was nearing, but she was receiving no word from him.

Witnessing firsthand that German families were suffering just as American families were, Peebles recalls experiencing an internal shift, "I began to understand that we were all the same - just people fighting the battles that others had formed and planned."

Compassion and friendship transcended - and, ultimately, washed clean - the unpleasant forces which had convinced the souls contained within that hospital that they were enemies.

On Christmas Eve, this revelation would be solidified as truth.

On such night, the soldiers dined on a festive meal of turkey, giblet gravy, potatoes and cranberry sauce. Hard candy, "surprise pie" and coffee were served for dessert. But, those indulgences would not go down in history as the highlight of their evening. 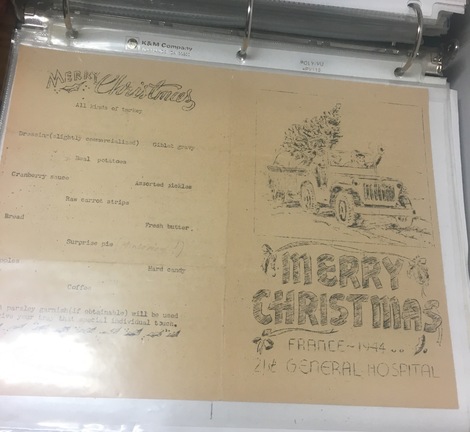 Shortly after the dishes were cleared, something unusual seemed to be brewing. While the wounded lied in their beds with satisfied bellies, their attitudes were swarmed with irritation. The ward had grown darker and quieter much earlier than its usually scheduled time. What is going on, they wondered.

Then came their answer.

In single file, dressed in their gray and white uniforms, their faces aglow from the lit candle each held in her hand, the German nurses glided through the darkened hallways. As they approached the wounded - their own soldiers lined in beds to their right, and the American soldiers to their far left - their voices projected in angelic harmony:

And, then, one-by-one, the voices of American soldiers began merging with theirs:

Silent Night, Holy night.
All is calm, all is bright.

Soon, all whom were able chimed in, continuing with other classics:

It came upon a midnight clear

A choir of voices in English and German expanded throughout that space - some loud and robust, some weak and small, some balancing on perfect pitch and some teetering just out of tune, but exchanged between individuals who - only weeks prior - had represented the other's demise. It was an otherworldly type of dissonance that would stretch on for only 10 minutes, while the echo of its impact would resound for generations to come.

"People who were shooting each other a week before were now sharing Christmas," Peebles said with eyes lowered, unable to forge his recollection without a series of tearful pauses.

These souls - despite having been trying to kill one another weeks prior, and unable to speak the same language - were being cradled by the same moment.

I consider the possibility that true human connection is capable of conquering any language barrier, any cultural barrier and any ego-concocted barrier. And, so I wonder, now 72 years later - whether immersed in the spirit of Christmas, the lights of Hanukkah or simply gazing onward with hope for a New Year, shouldn't we consider that human connection transcends all that we believe to be worthy of rivalry? Are we not all fighting battles, engaging in bigotries and wading through sufferings others have formed and planned?

Perhaps we can lift the veil of our differences this holiday season, and be cradled by our unified humanness - just as our forefathers did all of those Christmases ago.

Because I don't want to live my life being robbed of potentially magical moments with someone worthy of my friendship, just because it was decided for me that that someone is my enemy.

Lacey Johnson is a magazine writer and journalist based in Nashville, Tennessee. For further reads that hit you like a hug, visit her pride-and-joy here.