The publication of The Book of Symbols: Reflections on Archetypal Images is the child of an unlikely marriage between ARAS, a hidden gem of an archive, with Taschen, the daring and brilliant world wide publisher of fine art books. The union of ARAS and Taschen is not so strange when one realizes that both organizations are passionate about depth and beauty. Each is willing to spend the time, money, and human energy to bring a unique vision into the world. The result is a gorgeous bargain of a book which follows in the ground breaking tradition of C.G. Jung's Man and His Symbols.

For most of its seventy five year history, branches of what is now known as ARAS (The Archives for Research in Archetypal Symbolism) have pursued its mission in relative obscurity, hidden away in the filing cabinets of a handful of Jungian Institutes. A few years ago, ARAS created ARAS Online by digitizing its collection of 17,000 images and 90,000 pages of cultural and psychological commentary. ARAS Online and its free quarterly ARAS Connections offer stunning public access to the archive. The Book of Symbols is the newest and richest offering of ARAS which is now sharing its treasures and wisdom with the world. The publication of the book represents the culmination of a fourteen year effort by a large team of collaborators who were led by Ami Ronnberg and Kathleen Martin.

The emergence of ARAS into more public arenas has caught the eye of both the Huffington Post and the Wall Street Journal. In August, 2010 Arianna Huffington turned to ARAS Online to help understand the symbolic power of Sarah Palin's identification with the mother bear. And just a few weeks ago, the Wall Street Journal reported with some fascination on the ARAS approach to the archetypal world of images! This is astonishing because ARAS has about as much to do with financial markets as the great German mystic, Meister Eckhart, does with the derivative bond market.

According to C. G. Jung "psyche is image" and The Book of Symbols is all about the evocative power of images to move us in profound and mysterious ways. Most books of symbols manage to kill the symbol by reducing it to simplistic equations. The Book of Symbols moves in just the opposite direction by allowing the living symbol to shine through poetic evocations of beautifully chosen images. It follows the lead of Eckhart who taught us that "When the soul wants to experience something she throws out an image in front of her and then steps into it."

The mission of ARAS is to collect and research examples of archetypal symbolism from every culture and every age. For example, if you go to ARAS Online and select "snake", you will get the following "cultural time line" which displays by culture and age every image in the collection related to "snake": 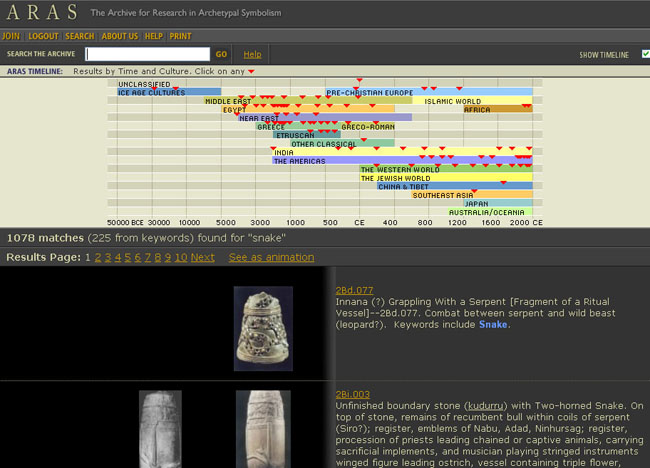 The Book of Symbols follows this principle of using images from around the world and every era to explore a symbol.

Here is a small sampling of images and shortened, accompanying text offered in The Book of Symbols: 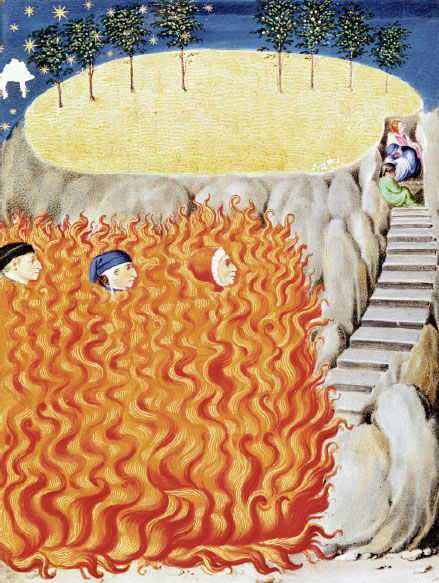 "In myth and in reality, fire sometimes merely destroys, but often destroys so that from the purified residue or ashy essences a new world may come into being." 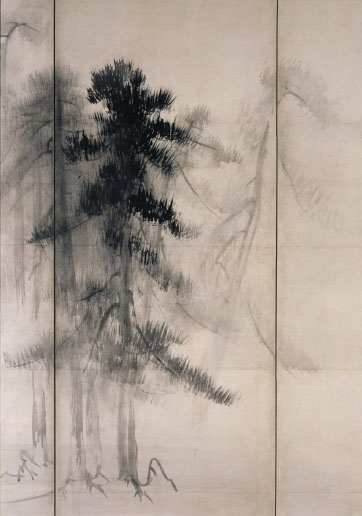 "With a few brushstrokes, a Japanese painter conveys the strong, standing presence of pines amid the grey mists of winter. Associated with Confucias and the Taoist immortals, the pine is a favorite subject of Chinese and Japanese painters and poets. Because of its hardiness and the fact that it retains its green leaves even through the winter, the pine has become a symbol of long life, immortality, constancy, courage, strength in adversity, and steadfastness unaffected by the blows of nature." 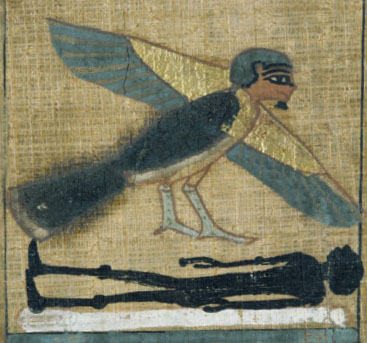 "In our desire for boundless freedom, we identify ourselves with the flight of birds. In our imagination, we transcend the ordinary world by leaving the earth and the weight of the body. Wings lift us." 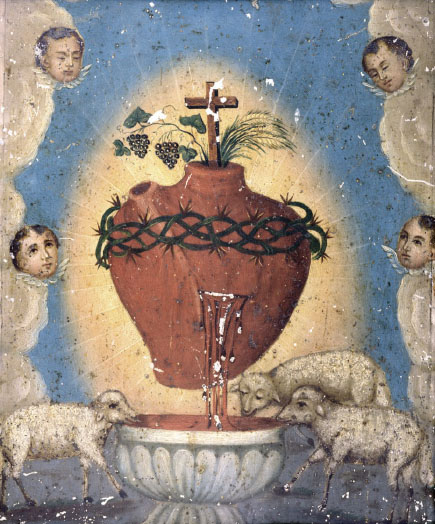 "Stop the flow of your words,
open the window of your heart and
let the spirit speak."
Rumi 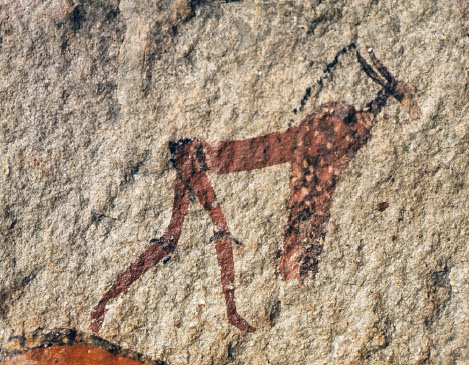 "In the very earliest time,
when both people and animals lived on earth,
a person could become an animal if
he wanted to
and an animal could become a human being.
Sometimes they were people
and sometimes animal
and there was no difference.
All spoke the same language.
That was the time when words
were like magic.
The human mind had mysterious power.
.....
Nobody could explain this:
That's the way it was."
Translated from Innuit by Edward Field

In the early stages of creating The Book of Symbols, one of the contributors dreamt of the emerging book in the following way:

"I am in a library, looking in a reference book. The first page is 'A' which has a listing for 'apricots' -- except the apricots are real and I can take them off the page, put them on a plate and eat them. A man next to me is looking at the entry for 'beans' under B and he can do the same thing with the beans."


Many readers of The Book of Symbols are finding this prophetic dream to be true as they partake of the book as an unexpected and magical feast of living symbols that they can ingest. About the phenomena of the edible book, one can only follow the lead of the Inuit poet and say:

Nobody can explain this:
That's the way it is.