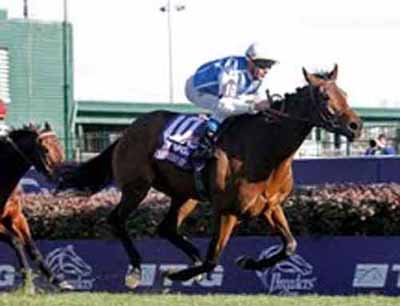 Winning her record breaking third Breeders' Cup Mile, Goldikova is the long shot, behind Zenyatta and Blame, for winning the 2010 Eclipse Award Horse of the Year title. Currently, Goldikova remains in training and there is great anticipation that she will venture to Churchill Downs in November 2011 looking to win her fourth Breeders' Cup Mile.
Photo courtesy of Photos by Z

The Thoroughbred racing community is in the final moments of debating the merits of Zenyatta, Blame and Goldikova (IRE) as finalists for the Eclipse Horse of the Year Award that crowns the MVP of horse racing in the United States. All 2010 Eclipse Award winners will be revealed at the annual awards ceremony on Monday January 17, in Miami Beach.

Named after the prepotent Thoroughbred foundation sire Eclipse (1764-1789), the Eclipse Awards are awarded annually and are a joint undertaking of the National Thoroughbred Racing Association (NTRA), the Daily Racing Form (DRF) and the National Turf Writers and Broadcasters Association (NTWBA). Members of the NTWBA and representatives of the NTRA and DRF elect the overall Horse of the Year and Eclipse winners in eleven racing divisions and five human categories.

A record 238 ballots were tabulated this year. According to Alex Waldrop, CEO of the NTRA,

"That's an unprecedented 94.8% participation rate (though I must confess a certain disdain for the 13 people who were offered the much-coveted privilege of voting and yet for whatever reason failed to return the ballot). In any event, finalists were determined in each category by voters' top three selections using a 10-5-1 point system, with winners being determined solely by first place votes."

In alphabetical order, the 2010 Eclipse Award finalists are::

This year, three adjunct Eclipse awards were announced in early January and will be bestowed at the ceremony. Marylou Whitney and Claiborne Farm will each receive an Eclipse Award of Merit for unfailing service to horse racing. Team Zenyatta will receive a Special Eclipse Award for their magnanimous efforts extending racing's outreach throughout Zenyatta's campaign.