This is the third installment in the Quest for the Lord of the Nile series. Read Part II here. 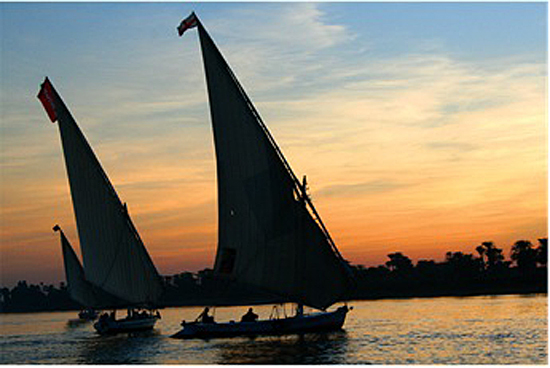 Feluccas on the Nile, photo by Laura Hubber

From Saqqara I trundle down into the Fayoum Valley, a depression some 50 miles southeast of Cairo and well below sea level, a place burly with old heat. It was here the greatest worship of Nile crocodiles took place, in a city founded by Menes of the First Dynasty, but officially named Crocodopolis in the third century BC by Ptolemy II. The rulers under the Ptolemies took Sobek to a new level, claiming he the father of Zeus in the Greek pantheon.

At a withering resort on the edge of Lake Qarun we sip mint tea and look out at brightly-painted fishing boats. Though you would not know from the graciousness and hospitality, this is an oasis where Muslim fundamentalism runs deep into the subsoil, and recent terrorist acts were supposedly plotted along these shores. This valley has long been a fertile bed for severe ideas.

Just up a tor above Lake Qarun, under a glare so fierce it roasts the eyes, I meet Dutch-borne archeologist Dr. Willeke Wendrich, Associate Professor at UCLA who is overseeing a dig at Karanis in the heart of Crocodopolis. Karanis was the first Greco-Roman site excavated in Egypt, starting in 1895, and over 100,000 archaeological objects have been recovered to date.

As she sweeps her hand along the dusty ruins she says, "This area was once infested with crocodiles." She explains that not only did the annual deluge wash in hordes of crocodiles, but when the waters retreated the crocodiles remained, lurking in puddles, pools and fields, creating a constant threat. In an attempt to control this powerful and highly evocative beast they deified the crocodile, building at least two large pedestal temples to Sobek here to pay homage, often through sacrifices on altars.

We are standing in one, the limestone-based Southern Temple, which in its central temenos rests a large stone alter, where one can only imagine what took place. Alongside is a concealed opening where some speculate priests hid and gave oracles, pretending they were Sobek, a sort of Wizard of Oz behind-the-curtain spectacle. Anatomizing a temple, though, like interpreting a hieroglyph, risks missing the unanalyzable spirit of the thing, its beautiful and hazardous play in a time we can never know.

On either side of the altar are oven-like compartments, niches where sacred crocodiles, mummified with the use of natron, were placed on biers. Out in the courtyard is what looks like a pool, and we know from Herodotus and other travel writers of the day that crocodiles were kept in pools and bedecked with golden necklaces and bracelets, glass earrings and pendants and other jewels, and hand-fed grain, meat and wine mixed with milk and honey. It was an early form of ecotourism, a Roman Holiday so to speak, in that pilgrims from the other side of the Mediterranean came here for a chance to see a croc up close, and they paid for the privilege.

The temple seems to have been abandoned around the middle of the third century AD, about the time faith in Sobek as a god and savior waned, coinciding with one of the intervallic droughts. The droughts seemed to prove not only the Pharaoh's vulnerability, but also that no matter what homage was paid to Sobek, he didn't, or couldn't, bring the all-important flood sometimes.

From Fayoum I drive back to the Nile proper and sail up the waters early texts cite as the sweat of Sobek, towards old Thebes, Luxor, and the Valley of the Kings. The middle section of the Nile is unhurt by wonder, defined by the sweat of the working class, factories, pylons, roofless brick dwellings and mud huts adorned with satellite dishes.

Passing to Upper Egypt the river again spills its romance, sighing around a bend the shape of a crocodile tail. At the water's edge is a colony of reeds, glistening and dancing as the current strolls the margins, stroking stems with fluid fingers. And there is a feast of birds....weavers, kingfishers, darters, cranes, herons, and of course, Egyptian geese flying in wedges around our craft. 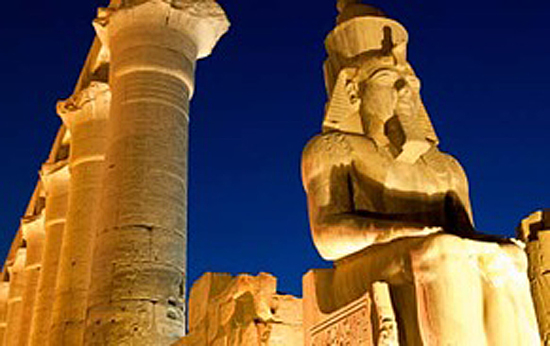 Stepping into the Valley of the Kings at dawn it is quiet and cool, as though the whole of the Nile Valley is holding its breath. The alabaster shops are closed; no urchins tug at the cuffs. Within the shafts of sunlight platelets of dust move as if in obedience to the rhythms of ancient, silent slaves carrying their burdens.

But then the first of the tourist buses arrives, and then the next, and next, and on and on.

No summer theme park crunch can describe the experience at the Valley of the Kings...waves and waves of tourists, like warriors from Middle Earth, pour into the tombs, and just when it seems there may be an ending to the crowds, another wave rolls in, tourists from every faucet of the world. Amidst this valley of babble I manage to squeeze into a couple of tombs, and there, among many tales from the crypt, I find some vivid renditions of Sobek, seemingly guarding the entrance, open jaws facing outwards. Sobek was seen as a powerful protector not only for tombs from raiders, but also the deceased in the next life, just as the crocodile seemed to protect their fields...the crocodiles swept throughout the fields during the flood did not eat the crops, rather instead kept grass-eaters at bay, such as hippos and livestock.

In one tomb there is a crypt to Sobek. In another there are neat rows of drawings of the clawed beast in dramatic, frangible moments, scenes of life that reach across the centuries and move today's viewer because the backdrops seem in many ways so contemporary. We may worship different gods, but we still eat, drink, dance, hold hands, and hope there is an afterlife.

The Pharaohs gave Sobek his due, but the veneration continues today, in different forms. From the cruise-ship dock I hire a high-masted felucca, one with a sail promoting a local beer, a couple of miles to Crocodile Island where the worship is alive and well at the Mövenpick Luxor Resort. Everything is croc-themed, from the tiered garden walls decorated with an infinity of crocodiles, to "Sobek Hall," the conference center, to the swampy pool on the grounds that houses a lone live crocodile, to the famous Crocodile Bar, where under a tapestry of a hungry croc with mouth agape I pay my homage and order up a weapons-grade fruffy fruit drink and toast the mighty god.