"Geez, it's hot in here! Can someone crank a window?"

It's the last thing that you would expect a a firefighter to say. But in Wisconsin's capitol, the air is steamy from the thousands of bodies that have passed through the historic building in the past week.

When protests in Madison, Wisconsin broke out with Republican Governor Scott Walker's budget proposal, state firefighters immediately backed the public sector workers, who would be stripped of collective bargaining rights in the bill.

Never mind the firefighters, along with cops and state troopers, were exempt from the union busting legislation. They have been protesting since day one with their self described working "brothers and sisters" in the public sector.

Monday night, around sixty men and women marched from Madison's Fire Station #1 to the capitol with blankets, pillows and plenty of snacks to spend the night with fellow protesters on the hard marble floor of Wisconsin's capitol. 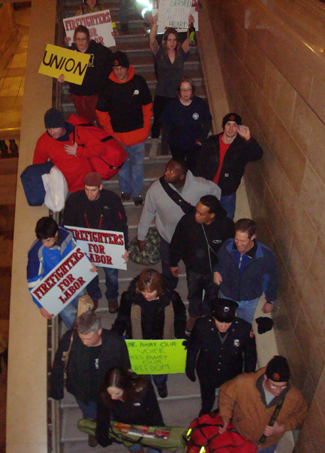 "We just couldn't stand by and let this happen to our brothers and sisters," Mahlon Mitchell, State President of the Professional Fire Fighters of Wisconsin (PFFW), said. "We are firefighters, we respond to emergencies, and we are responding to an emergency of the middle class,"

This type of emergency will require more patience then fighting flames, however, as David Sass, a Kenosha firefighter noted. Sass said that he and his peers are ready to wait until Walker is willing to negotiate. "Scott Walker has never dealt with the determination of firefighters," he said, almost as a warning.

And so the firefighters have become known as morale boosters. Wearing gear, playing bagpipes for cheering crowds, and waving signs that read "Firefighters for Labor," throngs of protesters respond immediately with hoots and hollers whenever firefighters turn.

"We recognize how much energy rises when we come through, it's an awesome responsibility. It's very humbling." Pete Silva, a retired Kenosha firefighter said.

Silva estimated that 250-300 firefighters make it to the capitol to support union workers daily. It is an impressive showing, but Mitchell stresses "We never do things for notoriety -- we do it because it is the right thing to do."

"It's not a fight about unions, its a fight about rights," Jeff Birmingham, a firefighter from Milwaukee county explained. Birmingham has traveled the 75 miles to Madison daily to protest, saying "I'm here to fight for everyone, for all employees."

As the firefighters walked into the capitol Monday night at 7:45 pm, the crowd of a few hundred protesters, young and old, began drumming, cheering and snapping photographs. "Thank you, thank you, thank you" protesters exclaimed, shaking hands and high fiving everyone in uniform.

Many consider the firefighters heroes. But the firefighters brush the compliments off. "It's about our rights," Silva stated simply. "It's not for politics, but its an assault on the middle class. We have to be here to support our union brothers and sisters."

For now, the sixty men and women in uniform are ready to hunker down, fight for the rights of public workers of Wisconsin, and maybe get a few hours of sleep in too. But if the capitol is too warm and full of commotion to catch a few hours of sleep? Mitchell did not seem worried.

"We'll sleep later, after this is all over."