This is part two in a three-part series. Read part one here.

At first I think Russ is joking, but his tone is too severe. So, I turn to the Riette, exchange glances, and then take off running back up the trail with a couple others. But I hadn't been watching too closely on the way down, and come to an intersection of two canyons, and can't tell which one we descended. I yell. My voice echoes up the canyons, but nothing returns. I call a few more times, and finally hear Pasquale's voice up the right canyon: "We're up here."

We scrabble up the scree, and come to a sandstone shelf. There sprawls Seth, his shirt stained with tramlines of sweat. Tim Cahill is crouched over his left foot, firmly holding it in place. Seth describes his fall, wherein he stepped off a ledge twisting his right ankle, then fell hard over onto his left, which made a shattering sound. His left foot was turned in a 90 degree angle dangling with no support on the medial side, likely a multiple fracture with torn ligaments. He called to Tim, hiking a few paces in front. Following instructions from Seth, Tim held the twisted foot in a vice-like grip, and Seth turned to re-set it.

Hot snakes of pain are running around Seth's legs. He refuses pain killers, citing the increased possibility of shock, and wanting to keep a clear head. We have a SAM splint, or pocket cast, and Pasquale and Dan Kohn form it to the bottom of his leg ankle, and foot...but Seth's ankle needs side support. We look around for something flat...a branch, a stone....but can find nothing appropriate. Then Tim Cahill does something beyond the ken for a journalist...he pulls out his two elongated notepads, just the right size, and offers them...even though they have his thoughts and scribblings of the last few days, the currency of his livelihood, he sacrifices them for the sake of Seth.

With his left ankle stabilized we have to get Seth out of the canyon. The Sat phone is at camp, so we have to try and carry the 200 lb. man out. We can't go back up the canyon--it would be too hard to lift him--- so that leaves downward, and it is another five miles or so to camp. Pasquale, the Everest climber, the strongest member of our team, is the primary carrier with Seth's right arm slung over his shoulder, while three others switch turns with his left arm as we try to work Seth down the canyon. It is slow going, as his other ankle is also injured and he can't manage much weight on it for long before unbearable pain fires through.

Slowly, slowly we limp down the widening canyon. We try various ways to carry him...the Lifeguard carry; the Fireman's carry; hoisting by his belt...nothing works for more than a few yards at a time. And it is now mid-afternoon, the sun at its zenith, the temperature over 100 degrees. The entire sky is like a metal dome grown white with heat. "It may be hot, but at least it's steep," Pasquale quips in his signature mode of positive pessimism.

Seth's rush of adrenaline in the aftermath is gone, and he is hanging like a rag doll. It's very hard to carry him more than a few feet at a time without a respite. So we stop beneath a camel thorn tree. Its branches, more gray then green, shine with a metallic glister and give little shade. I put my daypack under Seth's neck as a pillow, and we prop his leg on another. It is clear we can't carry him all the way out in a timely fashion...it would take days at this rate. "I've got a plan," Pasquale offers. "We leave him here for 10 days until he's 110 lbs., then we come back and carry him out." It is exactly the type of irreverent comment Seth needs, and he smiles for the first time in over an hour.

We look around to see if we can fashion a stretcher from tree branches and our packs, but the insect-like vegetation isn't sturdy enough for poles. The sun is merciless and personal, staring like a snake's eye. We are on the edge of the muddy, fulvous Lion River, hot as tea, and are running through drinking water almost as fast as we can filter it. We need a solution, and quickly.

Lisa Conte, a marathon runner, volunteers to jog to camp and fetch the sat phone...five miles each way over ground as inhospitable as the moon, three hours at best in the poisonous heat. The exercise has the potential to feed oxygen to the firestorm of the accident with yet another. But when Seth says he thinks he has just a couple hours before gangrene might set in a strong light burns behind Lisa's eyes. Nobody else in the group can run as fast as Lisa. I give her the go-ahead....we need to try something. As she takes off a troop of baboons barks, and a flock of Egyptian geese flaps up the canyon, as though alarmed by craziness of the hothouse run.

The air is hot, dry, breathless. The canyon walls and the river bed boulders have the washed-out brown glare of too much heat trapped in too little space. Seth lies in the scant shade of the thorn tree and falls into an eschatological funk. "I might lose my leg. I could die here," he mumbles aloud. Then he holds his breath, as though the least movement might snap the thread of his being. 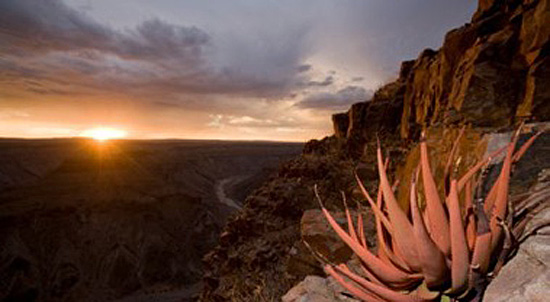 At 4:00 I look up canyon and follow the contours lacking in any curves or cambers. Something waves into view: a desert mirage, the likeness of something jinking towards us, like a klipspringer. I watch transfixed as the image grows from a blur to something with features... it is Louis, carrying a black bag...the sat phone. Not far behind is his assistant, Peter Brandt from the tribe of Nama, carrying fence posts, rope and a tarp to fashion a stretcher.

As it turns out Peggy, Riette and Chris Haines had continued to camp, and Chris remembered the sat phone, dug it out of a pack, and gave it to Louis. Louis knew the fastest way to bottom of the Lion River was from the rim, so he picked up Peter, had Riette drive to the rim, and he and Peter hiked down.

Now we have options. Pasquale, Louis and I unpack the sat phone and start climbing up the cliffs, up towards the canyon swifts, to find a clear view of the Atlantic satellite, while Dan and the others put together a stretcher with Peter's materials.

Phoning a rescue helicopter from the Fish River Canyon on a Sunday evening is no easy task. It takes us an hour just to lock into the satellite, and then Louis tries calling various friends and neighbors who might find the number of a medevac service in Windhoek. Nobody can. So, we try calling friends and relatives in the US...Pasquale calls his wife, and has her search his computer, to no avail. I call the operator, and get a woman's voice in London. "We're in Namibia, and have an emergency." "I never heard of Namibia," she replies, and hangs up.

As we are making our phone calls we watch the battery indicator bars reduce, and we watch the silent movie of the team below attempting to use the stretcher. They carefully move Seth onto the make-shift gurney, and lift him up....but they move like a lumpy, viscous liquid. They struggle to carry him over the rocks for a few yards, then stop and rest. A couple times they almost spill him. Then they give up, and look up to us as though seeking answers nobody has. At one point Shannon moves to the base of our scarp and starts prancing around with her hands curled down, performing curvets with one leg. "Let's get horses," she caterwauls. Pasquale and I turn to Louis, and he shakes his head no. "There are no horses nearby," he yells down the cliff. But Shannon dismisses this as tosh, and stomps off. Tempers are running high, as they do with most deracinated plans. The fading sun is turning the canyon walls blue-black, menacing and separate. Pasquale heads down the hill to tell the group to head to camp, to race the darkness. In the last light I watch a fish eagle float down the canyon without moving its wings looking for a last snack.

US Presidential Election 2020
Breaking news, analysis and the latest polls on the presidential race from HuffPost’s politics team
See More
Voting Made Easy
Register to vote and apply for an absentee ballot today
Register now
More:
travelnamibiaEcotourismAfrica
Newsletter Sign Up
An essential daily guide to achieving the good life
Subscribe to our lifestyle email.
Successfully Subscribed!
Realness delivered to your inbox