Throughout its 75 year history, Social Security has provided critical economic security to millions of retirees, families, children and the disabled. Social Security is paid for by the dedicated contributions of workers and their employers, has administrative costs of less than one percent, and since it cannot borrow to fund its operations, Social Security does not contribute to the deficit. No wonder that Americans from all walks of life consistently and overwhelmingly support our nation's most successful social insurance program -- a level of support that is not achieved by other governmental programs.

Social Security currently has a $2.6 trillion surplus which has been building up since the 1983 amendments and is intended to help absorb the retirement of the baby boomers. This surplus is invested in US Treasury securities that are backed by the full faith and credit of the US government. According to the Social Security Trustees 2010 report, Social Security can pay full benefits until 2037, at which time, if nothing were done to strengthen its financing, Social Security would still be able to pay about 78 percent of benefits. This quarter of a century means there is time to strengthen its financing without cutting benefits for future beneficiaries. The American people will insist that Congress do what is needed for the program to pay full benefits and protect these benefits they were promised and have earned.

Despite the overwhelming public support for Social Security and the critical retirement, survivors and disability insurance it provides to millions of Americans, Peterson and his Wall Street friends want to reduce Social Security's protections and force average working Americans to put their future retirement, life and disability security in the hands of Wall Street -- the same crowd that nearly caused a collapse of our economy and pushed the country into the Great Recession.

It would be very unpopular for the opponents to simply state that their goal is to reduce or eliminate Social Security, requiring politicians to eat from a poison apple. Instead, the opponents try to create false fear about the future of Social Security by making it seem as if the program contributes to the nation's budget deficit and debt. The same Wall Street firms that needed the taxpayers to bail them out -- and individuals like Peterson who took advantage of a tax loophole that enabled him to pay taxes on his Wall Street profits at the same rate as a janitor cleaning his office -- are conducting a massive lobbying campaign to reduce Social Security protections for working Americans and their families by claiming it is a way to lower the federal budget deficit.

Social Security is self-financed, cannot borrow, spends less than one percent on its administrative costs, has a $2.6 trillion surplus which will continue to grow for a number of years, and is off-budget. It does not contribute to the federal deficit or the debt. The Social Security surplus is invested in US Treasuries which enables the federal government to borrow less from other sources. The government borrows these Social Security funds to pay for other government spending -- but is obligated to pay interest on these borrowings -- and pay back the borrowed funds in full when they are needed by Social Security for benefit payments.

Opponents of Social Security obscure the real facts, but they are easy to see in the graph below. The planned build-up of the Social Security Trust Funds since 1983 makes it clear that Social Security has a $2.6 trillion surplus today that will continue to grow: 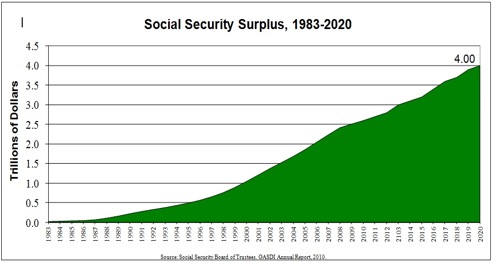 A look at the federal budget over the same time frame reveals a starkly different picture -- many years of deficits, with only a few years of surplus -- a surplus that disappeared during the G.W. Bush Administration. In 1993, a Democratic Congress and President Clinton, without a single Republican vote in either the House or Senate, enacted a budget plan that put it on a path to elimination of the deficits --and brought the budget into balance, and then later into surplus. In his 1999 State of the Union address, with the budget then in balance, Clinton called for the Social Security surplus investments to be held in a special reserve and not used for other government spending.

As a candidate for president, Vice President Gore made a central part of his campaign a plan to put Social Security's surplus in a "lockbox" to keep its assets from being used for other government spending. When the Supreme Court decided the 2000 election in favor of Bush, however, a very different view of the Social Security surplus became operative.

During the same time period in which Social Security was building a surplus the federal budget was more often in deficit than not, as shown below: 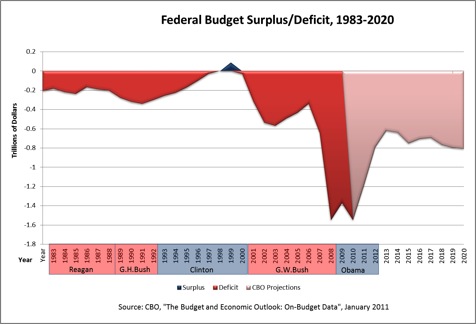 The federal budget surplus of 2000 quickly disappeared when Bush took office, turning into a sea of red ink. Bush borrowed heavily from the Social Security surplus to help obscure the fact that federal taxes were not bringing in enough revenue to pay for the wars and his tax cuts.

The Costs Imposed on Social Security by Wall Street's Failures

In a recent paper on deficit reduction for the Roosevelt Institute, Nobel prize-winner and Columbia University Professor, Economist Joseph Stiglitz noted about the Wall Street banks: "Even if the banks were to pay back every dime that they received, they would not have come close to compensating the country for the full costs (now in the trillions of dollars) that they have imposed on others. "

These costs were imposed on Social Security as well -- Wall Street's failures have increased Social Security costs while also reducing revenues to Social Security. Social Security revenues were reduced by 1.13 percent of payroll from its annual balance in 2010 -- more than $60 billion in one year -- from what the Trustees projected last year "due to a deeper recession and slower recovery than had been expected." This does not reflect the costs to Social Security in 2008-09, nor does it reflect future costs of continued high unemployment, which reduces revenue, and higher benefit payments to beneficiaries forced to take benefits sooner than they otherwise had planned.

As a result of the Great Recession triggered by the economic bubble Wall Street created, Social Security revenues were less in 2010 than benefits paid out. This required Social Security to use a portion of its interest earnings on the surplus to pay benefits -- an event that would have happened several years in the future were it not for the recent economic downturn.

Why aren't the opponents worried about paying back Social Security -- why aren't they talking about repaying this debt to the American people?

According to the U.S. Treasury Department's "Monthly Statement of the Public Debt of the United States" (9.30.10), the total debt was $13.562 trillion and was held as follows:

House Republican Majority Leader Eric Cantor (R-VA) provided some insight to their Social Security views in a recent NPR interview when he was talking about Social Security and said, "We are going to have to come to grips with the fact that these programs cannot exist if we want America to be what we want it to be."

If the American public were asked about what priority should be placed on the debt owed to Social Security, we have no doubt that they would resoundingly say: "Pay Us Back -- pay back the money borrowed from Social Security!"