"How do you respond when you see this chart?"

That was the question Scott Reed, Executive Director of the PICO National Network, asked a room of about 25 pastors and rabbis who had gathered in Washington, D.C. for the first meeting of the new National Clergy Leadership Council.

"How does it feel to be faith leaders during such a time?" he asked.

A few people had seen this already during a presentation by Josh Bivens, an economist at the Economic Policy Institute and author of the recent book, Failure by Design: The Story Behind America's Broken Economy, but it was brand new to me. It took me, and others, a few minutes to digest what we were seeing here. One by one we commented about what we thought caused this. We tried to explain it, justify it, and rationalize it. Then Scott said something that stopped me cold in my tracks. 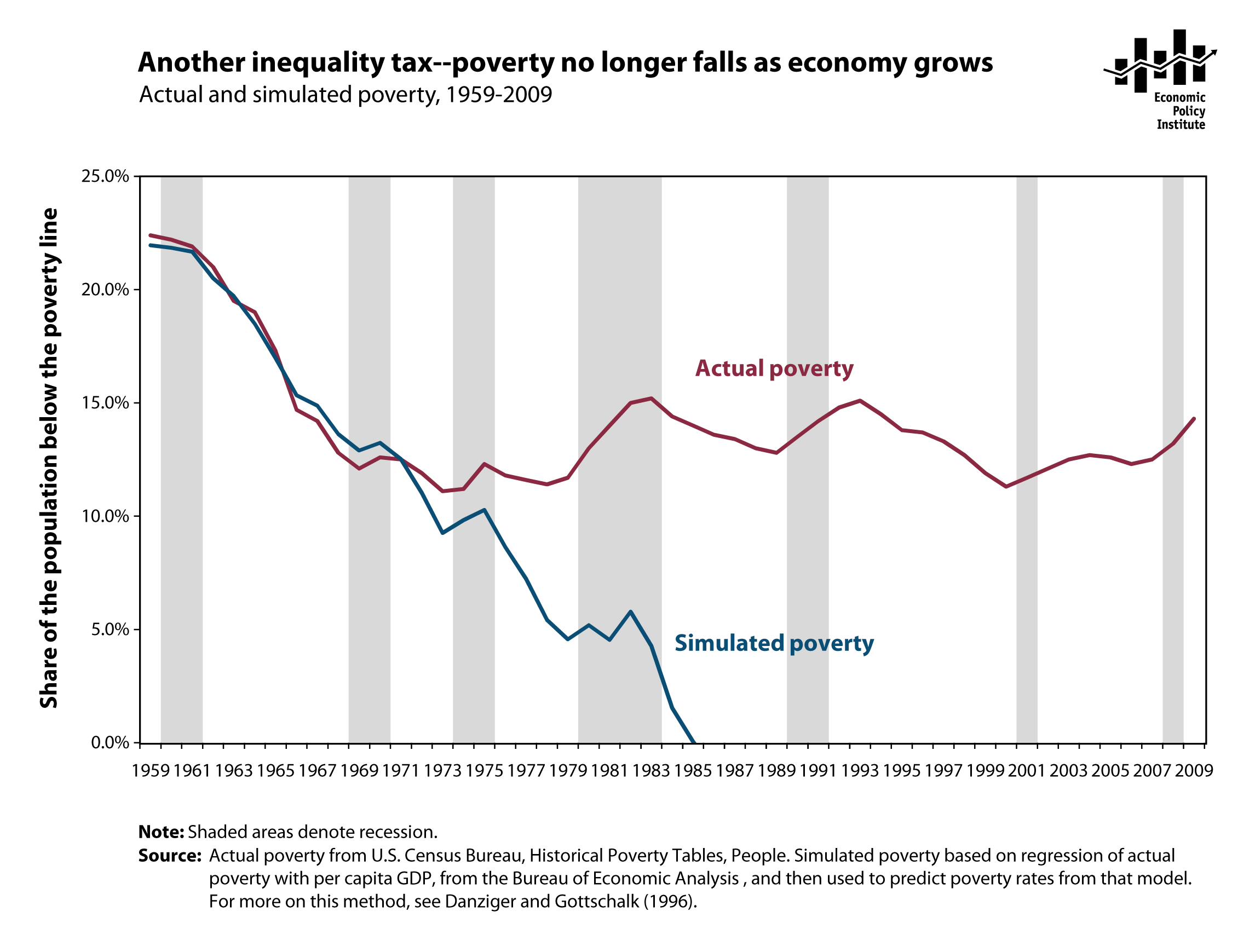 "This happened on your watch!"

Indeed it had. In fact, PICO was founded in 1972 to organize the religious community to address just such injustices in our country; at precisely the time these two lines diverge. That realization touched something in me. What had happened to religious communities during this time? Had we completely fallen asleep?

In the ensuing days since I first saw this chart, here is what it has come to mean to me.

Everything under the red line in this chart represents the economic and social pain that has intensified in our families and our communities. As a pastor I am witness to this every day, just within my congregation. Young couples unable to afford to buy a home as their parents did at the same age, college graduates unable to find work, let alone pay off their school loans, individuals and families unable to afford health care, losing their homes to foreclosure caused by unemployment or underemployment, individuals working longer hours or multiple jobs just to keep pace with an economy that has already left them behind.

This chart reveals that the economy used to work for all of us. There used to be a social contract that ensured that every person had access to the peace, security and freedom provided by fair earnings for hard work. This contract has been dismantled by years of policy making, which explicitly favors corporations and the very rich. It is no longer true that if you work hard you can afford to buy a home, send your kids to college and retire when you are 65 or 70.

More chilling still, this picture indicates that apparently a 13-15 percent poverty rate (and we all know that the real story of pain often starts at 200 percent of poverty, or more) is an acceptable threshold for our country. I think of this as the wreckage of runaway capitalism. Every machine produces waste. The 15 percent of our population that lives in poverty is just the natural consequence of deregulated, runaway capitalism, which has been elevated to our new national religion. Bivens and others are trying to tell us this is not inevitable. Not at all. We have chosen this path. Just as we chose, in the post-war years up until the early 70s, that capitalism would work for everyone.

The outrageous budget proposals being put forth by certain law makers in the past week, including dismantling Medicare, drastically weakening Medicaid, and cutting other social programs at a time when the elderly, poor and middle-class need them most, are nothing more than a thinly veiled attempt to solidify what Paul Pierson and Jacob C. Hacker call "winner-take-all politics" in their book by that name. Late Friday night lawmakers and White House officials declared they had reached an agreement on the budget. I'm afraid to look closely. I'm afraid we've learned nothing from the economic collapse of 2008 and the slow erosion of the middle class for the past 30 years. Maybe tomorrow, I'll read up on all of it. But today, I want to weep and repent.

The Hebrew prophet Jeremiah said of the politics of his day:

"Among my people are the wicked
who lie in wait like men who snare birds
and like those who set traps to catch people.
Like cages full of birds,
their houses are full of deceit;
they have become rich and powerful
and have grown fat and sleek.
Their evil deeds have no limit;
they do not seek justice.
They do not promote the case of the fatherless;
they do not defend the just cause of the poor.
Should I not punish them for this?"
declares the LORD.
"Should I not avenge myself
on such a nation as this?
-Jeremiah 5:26-29

His words ring relevant today. Where has the moral voice of our nation been during the past 40 years? What has been the response of our religious institutions? Most of the blame falls to churches -- especially since so many are arguing for a Christian America -- but all religious institutions need to look long and hard at this question. While we've been promising heaven in the by-and-by, people's lives have slowly unraveled in the here and now. We have allowed the gospel to be co-opted to an ideology that is diametrically opposed to the vision of the Jesus and the prophets. It is time for people of faith to stand up for pure religion -- "to look after orphans and widows in their distress and to keep oneself from being polluted by the world" (James 1:27).

If you are a religious leader who is as troubled by this as I am, I invite you to become a part of this growing conversation to create a just economy that works for the poor and middle class. Don't stand aside reasoning that someone else will speak up. These dire times call for loud and clear voices.