What can nature's design patterns teach us about computing? Containerization, liquid currency, and the possibilities of a trillion node world all packed into 20 minutes of TED. Or some small part of my 10 year personal journey of discovery related to MAYA's research agenda, packed into about 20 minutes of time on a Sunday Afternoon at TEDxCMU. Now ready for your viewing pleasure!

A few notes for after you finish watching...

The theme of TEDxCMU was ImPossible.

In answer to a number of questions we've gotten about this presentation I've been told these are the things I can say:

We would rather you just chalk this demonstration of the MAYA film up to a way to get your attention. All that being said, it would be hard to argue that anything that was shown couldn't be done in 5 or 10 years time. Nature is the existence proof.

Further the results we've been allowed to discuss from real field proven systems built using the design patterns discussed in the presentation are most definitely real. Liquid information systems, built on Nature's design patterns (and a few of our own), deliver. 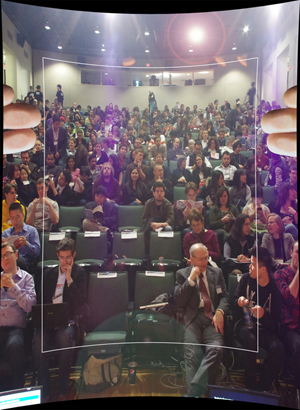 For more information about the underlying concepts about containerization, liquid currencies, the u-form or our other research, check out some of our papers!

Think the cloud as it is currently architected will save you? Think we are just describing isomorphs of database entries with hash tables?

Well, consider the road less traveled. Consider if what we are now seeing in creativity and innovation on the web or in the cloud can even compare to something like the cambrian explosion. Consider the lost opportunity and vast surface area of the trillion-node mountain compared to the last few feet at the top of the summit of client server computing and relational databases.

Old Bill said it best, "There are more things in heaven and earth, Horatio, Than are dreamt of in your philosophy."