I'm honored to bring to your attention the following two-minute film. It covers a simple subject: a man painting a portrait. However, to fully understand the significance of this film, it helps to know who the painter is and who he is painting.

However, the subject Chaz paints in this film is not a Supreme Court Justice, or a President, or even an acknowledged leader of any kind. The subject is a man on death row in Georgia, whose execution will be scheduled in the coming weeks.

Why would Chaz, whose last work was commissioned by the President of Gambia, take the time to paint a portrait of a man who not only can't pay for it, but probably will never see it? 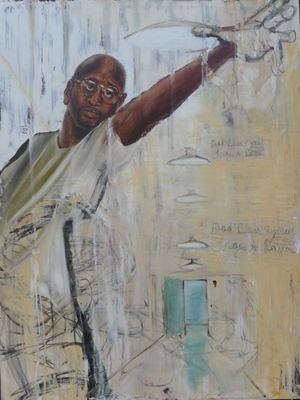 I am an attorney, and I've read the court briefs, and this is what I have been able to ascertain so far:

Twenty-two years ago someone shot and killed Georgia police officer Mark MacPhail. Troy Davis was convicted of the crime even though there was no physical evidence against him. Based on the testimony of nine witnesses -- only two of whom claimed to be eyewitnesses -- Troy was sentenced to death. Since Troy's conviction in 1991, seven of the nine witnesses have recanted all or part of their testimony or changed their stories altogether -- claiming, among other things, that their original testimony was coerced by law enforcement.

The point is, the case that put Troy on death row has been unraveling steadily since the moment he was convicted. The police found shell casings where Officer MacPhail was shot. They tried to match them to similar casings from a non-fatal shooting earlier that evening so they could prosecute Troy for both crimes. However, that victim later said Troy was not the person who shot him. A subsequent ballistics report discredited the connection between the shootings. And yet Troy is still slated to die, even though almost all the evidence against him has been so successfully challenged and the original ID against him came from a man multiple witnesses now claim to be the actual killer of Officer MacPhail.

Why, then, has Troy lost all of his appeals? The legal system is confusing even to lawyers. All admit that tensions and procedures surrounding the murder of a police officer are particularly rigid and tense. After two decades of appeals, Troy has been unable to earn a new trial. His only real chance to save himself came in the form of an odd two-day hearing where the burden of proof was not on the prosecution, it was on Troy to prove his own innocence.

After last minute attempts to bring the other suspect to the stand failed, Troy failed to meet his burden.

Yet still Troy's defense successfully persuaded the ruling judge that the original prosecution's case against him was not "ironclad," that "doubts still remain" and that there were many "questions unanswered." But the U.S. Supreme Court, currently balanced in favor of the death penalty, chose not to revisit Troy's case, thereby ending his appeal process for good.

And so Troy Davis is scheduled to die shortly after Georgia locates the proper drugs to kill him. This could happen in the next few weeks. Immediately before the execution date, Georgia's Parole Board will review Troy's case. They can schedule a hearing as late as a day before Troy is killed. They alone have power to commute Troy's sentence from death to life without parole.

Troy's only chance for survival lies in the parole board being aware that the case against him is not strong enough to cost any human being his or her life. That's why Chaz is painting Troy, why film maker David Serota documented him doing it, and why I am blogging about them.

I hope you can watch this two minute film.

Amnesty International for Troy Davis from Dokument Films on Vimeo.

For more information, or to take action to assist Troy, please check out the following sites: JusticeForTroy.org.

To learn more about Chaz Guest, go to ChazGuest.com.