The world is currently gripped in a struggle to see who has the biggest Jesus Christ. This "tourist envy" battle began in the late 1920s with this famous Art Deco Jesus featured in this postcard from The 30 Postcards Project. It is of course the artistic and powerful Cristo Redentor (Christ the Redeemer) Statue on Corcovado Mountain in the Tijuca Forest National Park overlooking the entire city of Rio de Janeiro, Brazil. Cristo was unveiled in 1931 as the World's Largest Statue of Jesus Christ and has since become the single most used icon to depict the city of Rio (and in some cases to depict the whole of Brazil). 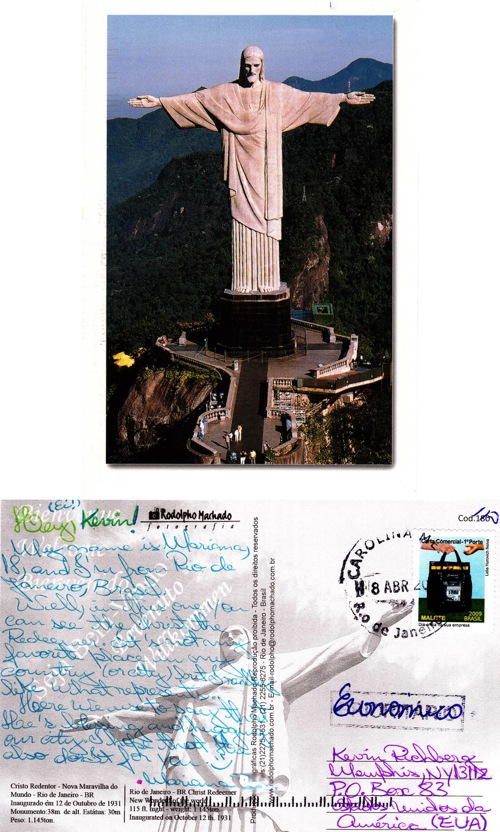 Brazilian engineer Heitor da Silva Costa designed the statue which was sculpted by French artist Paul Landowski. The statue's original design was chosen as a symbol of peace, not to encourage tourism nor to start a Jesus Christ statue building bonanza around the world. Cristo has been vandalized, struck by lightning, inundated by fungus, restored, renovated and reworked in the 80 years he's been standing watch with his arms outstretched (and he's still standing strong). To get to Cristo you can either take the funicular train up Corcovado Mountain, or walk up the beautiful hiking trail through the National Forest. When you get to the top the views of Rio are beyond comparison, as are the crowds of people on the viewing platform (the 8 people you see in this postcard aren't quite a reality).

So why isn't Cristo still the world's largest Jesus? Contemporary to Christ the Redeemer was Cristo del Otero, a statue in Palencia, Spain designed to be the largest in Europe (world) at the time but without the funding power of the Rio project. It was also completed in 1931, but its exact height has always been in dispute (I volunteer to head to Spain with some measuring tape). The statue is approximately 30 meters tall similar to Cristo Redentor, but the mound underneath is questionable (does it count as a pedestal, who makes that decision?). Cristo del Otero does not have outstretched arms because the project ran out of money, so instead the arms appear as if Jesus is directing traffic. He also has windows for eyes because the marble eyes were not in the final budget. The Palencia Cristo never attracted the same tourist attention as his Rio twin, and the competition for the world's largest Jesus spread to several other nations.

Fast forward to 1994 and you have Bolivia, Brazil's neighbor, getting in on the action. By this time in history Protugal, Vietnam, East Timor, Peru, Colombia, France and Mexico all have built Jesus statues between 25 and 30 meters tall, just shy of Cristo in Rio. Bolivia goes for the gold by designing the Cristo de la Concordia, which becomes not only the largest statue of Jesus Christ in the world but also the largest statue of any kind in South America. At 34 meters (statue only), located on San Pedro Hill in Cochabamba, Bolivia, the imposing Jesus has the exact outstretched arm configuration as Rio's Cristo. To one-up other Jesuses, the Concordia statue allows visitors to climb up into his arms for a breathtaking view of the Cochabamba area.

Enter the small town of Świebodzin, Poland on the border with Germany (population ~21,000). They revealed in November of last year the World's Largest Jesus, much to the dismay of folks in Brazil. But as always, Jesus rides in the same cart as controversy. Critics have claimed that the Polish statue is a "stunt," that it was made by local prisoners forced to labor on day release, and the craftsmanship was "shoddy" at best. It is also not clear if the statue is in fact the world's largest given that the stone portion is only 33 meters (1m shy of Bolivia's) but when you add the crown, a separate piece, on top it puts the whole unit above 34 m. Do we count the crown? Would Jesus want a crown? Would Jesus want a small town in Poland to be building effigies to him in order to bring in tourist dollars? Reactions from the townspeople were mixed. Elderly Catholics generally praised the statue as an affirmation of faith. Younger Poles generally condemned it as an embarrassing eyesore.

Father Sylwester Zawadzki who personally commissioned the "Polish Jesus Project" drove to the revealing ceremony in November in his personal Mercedes with rosary beads hanging from the rear view mirror. He didn't want to talk about his heavenly monolith. "I've had enough of talking," he said. When he was first asked why he decided to erect the huge Jesus, he replied, "It was Jesus's idea: I was just the builder."

More:
statuesArtboliviaBrazilPoland
Newsletter Sign Up
An essential daily guide to achieving the good life
Subscribe to our lifestyle email.
Successfully Subscribed!
Realness delivered to your inbox