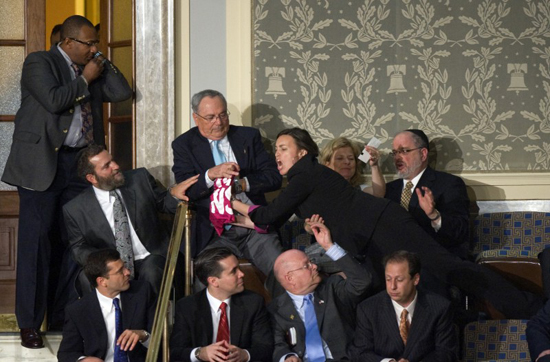 Halfway through Prime Minister Netanyahu's speech to a joint session of Congress on Monday I was confronted by a moral dilemma. A woman protester two seats away from me had infiltrated the speech, pulled out a red anti-Israel flag, and started hurling curses about Israel. The elderly gentleman to my right, whom I had been talking to just before the speech started, pulled the flag out of her hands, cupped his hands over her mouth, and assisted in subduing her. Should I help?

The night before at AIPAC, Bibi's speech had been disrupted seven times with multiple protesters making it almost impossible for him to continue. This follows an extensive effort on campuses worldwide for Israel-haters to make it all but impossible for any Israeli official to speak by heckling so repeatedly that the speech has to be abandoned. Clearly these efforts make a mockery of the entire principal of free speech. Now, a protester had infiltrated not just a college gathering but the inner sanctum, the very repository of American freedom and representative democracy, the United States House of Representatives. Her intention was to deny the democratically elected leader of the Israeli people the right to address the elected representatives of the American people. She could have vented her venom in any one of countless open forums, but she chose to deny Israel its voice.

Should I have participated in muting her? I had a split-second to decide.

Flashing through my mind as hands grabbed her from all sides were all the protesters against Israel that I had encountered in my eleven years as Rabbi at Oxford University. Twice we hosted Bibi at the University and twice hundreds of Palestinian students had been bused in from all over the UK to disrupt his speech. As I walked the chamber of the Oxford Union with Bibi at my side, hundreds of agitators thundered, "Netanyahu you should know, we support the PLO." Wow, it even rhymed. Netanyahu left his police cordon and walked over to the protesters and invited them in, promising that they would be called on to ask questions. A significant number joined us and he responded patiently to their pointed barbs.

When Ariel Sharon was my guest a huge throng of protesters arrived, a significant number of whom were Jewish. They made no noise. Rather, caked in fake blood they pointed at Sharon silently as he walked into the Union. He made the same gesture, walking over to some of the protestors, while never letting go of his wife's hand, and inviting them in to participate. Once again, many did and Sharon made sure to call on them during questions. The exchanges were hard-hitting but civil and all who witnessed it felt it had been a victory on both sides for free speech.

But all that has changed now. The Israel critics on campus have become Israel-haters, interested not in voicing any view but in delegitimizing Israel utterly and rendering it incapable of defending itself.

My mind now raced back to the heckler from Code Pink, who turned out to be Jewish, right in front of me in Congress. She was now horizontal as various gallery attendees attempted to neutralize her disruption. The Prime Minister had stopped his speech. Should I intervene before security could get there?

I decided not to. Firstly, it seemed to me that the Capitol police had plenty of contingencies for this kind of scenario and were far greater experts than me. Second, I could just imagine the headlines the next day: "Rabbi accosts protester in Congress." Or worse. "Author of Kosher Sex grabs woman in US House." "Rabbi Shmuley all over woman in spectator gallery" (OK, I jest about the last two but you get the picture). I decided that the image of a Rabbi participating in grabbing a protester, notwithstanding the circumstances, was exactly the kind of image these protesters wanted. They want to delegitimize the Jewish people in general and the State of Israel in particular. They want to perpetuate their lie that rather than Israel and Jews being people of benevolence and goodwill who have been forced to defend themselves against repeated attack, the Jews are now the aggressors.

So I stood as plain-clothed police immediately rushed in from every angle, grabbed the protestors, and pulled her right by me.

Prime Minister Netanyahu quickly recovered by mentioning that the idea of a protestor heckling in the Arab parliaments of Iran or Libya and surviving unharmed was impossible.

And it was ironically right there that the shared values of the United States and Israel and their special relationship became so evident. That one of the most powerful men in the Middle East can sit in front of the most powerful assembly on earth and be heckled and disrupted by a hate-filled agitator and simply make light of it as the woman was taken out of the chamber unharmed, spoke volumes about two incredible societies dedicated to the infinite worth of every human being, even a perceived enemy, and the infinite dignity of the human person to which both societies are committed. Even a person who would deny basic civility to Israel's elected leader was still protected under the rule of law. She might be charged with an offense but she lived in a society that protected her rights.

In his brilliant and impassioned AIPAC speech House Majority Leader Eric Cantor, Israel's most able defender and greatest friend in the US government, made the point that it's not the '67 borders that separate the Palestinians and Israelis. Rather, the conflict is all about values, specifically the Palestinian's' growing culture of death versus the Israeli culture of life. The Palestinians name public squares after terrorists. Mothers ululate when their sons blow themselves up on buses, taking little children with them. They teach their children in kindergarten and schools that Jews are hook-nosed and wicked. But the government of Israel trades hundreds of killer terrorists just to bury their fallen soldiers with dignity, gives every Arab-Israeli citizen complete and full human rights, and has consistently traded massive amounts of land in the slim hope that the Palestinians will sincerely wish to make peace.

I am a Rabbi and a Jew that has forever fought Islamophobia and has repeatedly written and preached in front of tens of thousands of Jews and Christians that Islam is a great world religion that took Jews in when they were kicked out of Catholic Spain and Portugal. I am constantly inspired by everyday Muslims I meet in the US who observe Halal, fast on Ramadan, and take their religion seriously. So it is with great sadness that I am witnessing the growing emphasis on violence - especially against Jews - that is tragically becoming commonplace among far too many of our Palestinian brothers and sisters.

The chance of peace ever taking hold in the Middle East is contingent on what Golda Meir once said, that Palestinians have to learn to love their children more than they hate Israelis.

Perhaps one day the female protestor who was dragged away in front of me will love the Arabs more than she hates Israel and if so, we'll see her directing her real protest against Arab societies that participate in honor killings against young women, hang gays, and deny our Arab brothers and sisters the basic right to protest without fear of death.

Shmuley Boteach, "America's Rabbi," is the international best-selling author of 25 books and is currently establishing The National Center for Universal Jewish Values. His most recent book is "Renewal: A Guide to the Values-Filled Life." Follow him on Twitter @RabbiShmuley.

Rabbi Shmuley, "America's Rabbi," is the international best-selling author of 30 books and an award-winning TV host and columnist.