As someone who has yet to send a tweet, the (by now) signature Twitter performances of Man Bartlett intrigue me. Like Rob Pruitt, a self-professed technophobe, whose 2008 solo exhibition at Gavin Brown, iPruitt, featured iPhone photos taken over the course of a year, and the YouTube aesthetic of video artists Ryan Trecartin and Kalup Linzy, there's something brazen yet accessible about the insouciant use of social media in art. Maybe it's the quotidian, spontaneous, DIY aspects of such work that make it seem so democratic that appeals, and the way it calls into question those old notions of what constitutes art. I can't help but situate it in a Fluxus lineage with its similar emphasis on blurring the line between art and everyday life, the role of chance, audience participation, etc. Even the durational aspect of Bartlett's work -- almost every performance takes place over a 24-hour period -- invokes the association as the artist's Cageian comment makes clear: "A simple physical action, over time, can radically shift consciousness, specifically when combined with 'real' and 'virtual' social interactions." So whether its going to a Best Buy megastore to tweet about what he's not going to buy (24h Best non-Buy, Union Square, Jan 7, 2010) - "#BestNonBuy: What movie would you like me to not buy?, #BestNonBuy: I am reading the first aid directions on a tomtom that I will not buy"; reciting tweets sent to him via a live feed at PPOW gallery (#24hEcho, The Hostess Project, May 22, 2010); or inviting people to tweet their dreams and have them priced by the artist (#24hClerk, March 5, 2010), the time frame remains the same. 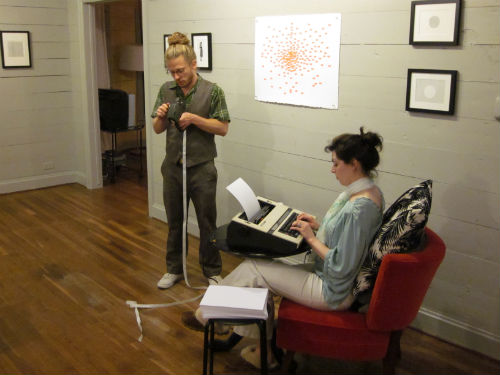 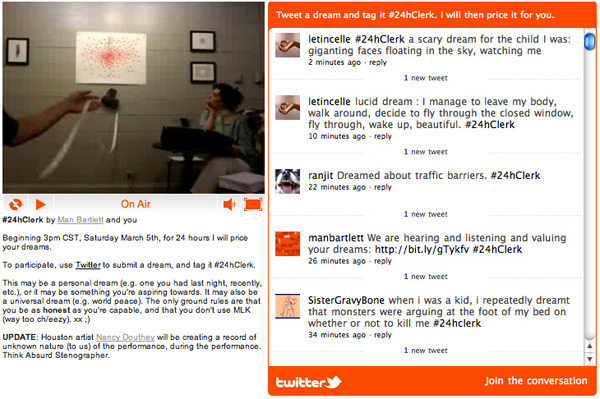 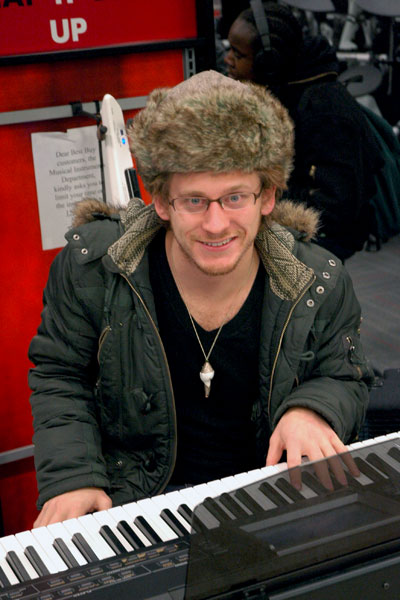 Wanting to know more about the artist, and in particular his most recent project, #24hPort (May 25, 2011), commissioned by Creative Time, I caught up with Bartlett to ask him how it went, among other questions. For this work, the artist sited himself in Port Authority and asked random people the innocuous but rather vague question, "where are you going?" -- all the while tweeting about the experience to whomever was interested.

JH - #24hPort is the first of three commissions curated by Creative Time, and one of the first Twitter-based commissions by any major arts organization, which will also include works by David Horvitz in June and Jill Magid (an artist who has never tweeted!) in July. How did you got involved in the Creative Time project, and why have you chosen to work with this medium?

MB - I literally just got an email one day (back in September, 2010) from Creative Time curator Shane Brennan, asking if I wanted to chat about it. It didn't take long for me to respond, but it was a pretty long process to realizing the project. And this is going to sound cheesy, but in some sense the medium chose me. I can look at my background, which is in theater, and also to the five years I spent working different Internet marketing jobs as signposts to some degree, but it's really just natural to me. I also like the potential of the medium. The challenge to re-envision a potential that a lot of people might not see, or don't realize even exists. And especially the potential to reach a very large, and geographically diverse audience.

JH - What were your initial goals for the performance, and how were they met, exceeded, dashed and/or altered by the end?

MB - I wanted to push the simultaneous engagement/participation between physical and virtual audiences to their limit, to see how well they could coexist. It's something I've been exploring and thinking about a lot since I started doing these Twitter performances. #24hPort taught me that it's extremely difficult to engage both at the same time, and that my preference may lie more with the online audience. Their relative anonymity fascinates me. In that sense I found myself becoming more of an observer at Port Authority, relating the bigger picture (through details) to the audience following the tweets through the hashtag.* And to me it seemed the most effective.

*Quick primer: A tweet is simply a message sent through Twitter. A hashtag (denoted by the # symbol), acts as a way to group tweets. All tweets sent with the hashtag #24hPort for example, are able to be viewed in the same "place." In this way a hashtag literally become a public space. The titles are one word is because you can't have spaces in a hashtag (e.g. #24 h Echo would only be recognized in twitter as #24). 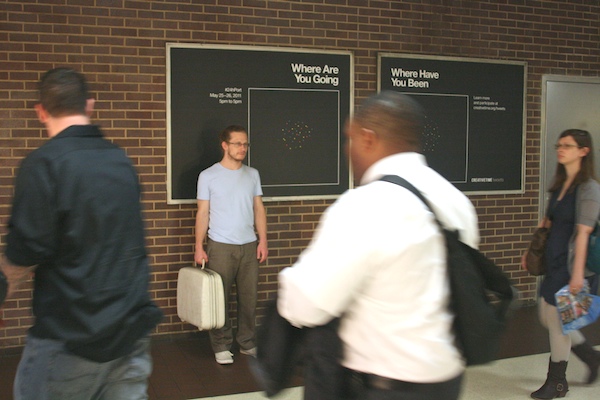 JH - Your experience as "observer" is interesting in light of Shane's comments about how his view of Twitter changed over the course of developing the project from seeing it "as a communication medium, a way for people to talk to one another" to a "public space, an environment, almost like a city or a public plaza..." When you asked people where they were going did you offer any kind of explanatory spiel?

MB - My starting line was simply, "Excuse me, where are you going?" The "excuse me" was a necessary primer. And it was great to see their reaction, as the more relevant question they expected would've probably been "Where is this bus going?" So, they would often look me up and down, and then see the iPhone in my hand. If they seemed hesitant I would say that I was doing a performance art piece. That, surprisingly, usually warmed them up for me to ask more questions. A few people clearly wanted nothing to do with me, but a lot of people were genuinely curious. I tried to ask as diverse a crowd as possible. The most intimidating to me were these two pretty thugged-out kids, who actually turned out to be super chill.

JH - Everyone knows Port Authority is not just a hub of travel but a haven for crazies/eccentrics. Was this a factor in your choice of location or just a happy accident?

MB - I conceived of the project specifically for Port Authority. I chose the location because it is a public space that operates for 24 hours and had a lot of potential for diverse interactions. Once I had the location in mind I thought of different ways to interact with it, and two audiences. I was actually dreading the psychological aspect of the performance because of the reputation you mention, and my small handful of experiences there. Instead, I was shocked at the level of humanity present, everywhere. From the drivers, to the staff, to the cleaners, to all types of folks passing through there. I did see one arrest (cause unknown) and I'm told one lady died on the way to the hospital after fainting at one of the gates. However I also saw happy lovers, displays of gratitude, calmness in people, and four teenagers brimming with joy about the double date they had just had.

JH - Yeah, it's sort of the Coney Island of transportation: a microcosm of the truly diverse "masses" that make up this city. What were some of the more poetic exchanges wrought by your interactions versus the strangest? And/or is there any that sticks out in your mind as being worthy of both descriptions (weird and poetic)?

MB - One poetic exchange was with a man who told me his wife loved to watch him play Xbox. And by the look in his eye, she really did. The strangest? George Washington. That was the name he gave me. An older man, maybe in his 60's, who had those weathered "I dropped too much acid" eyes. He was wearing a green Boston Red Sox hat and told me he was going to New Paltz to the mountains to be under the stars. That one was weird and poetic for sure. In a lot of ways, in that context, all of the exchanges were poetic. From the people who were too tired to respond, to the ones I talked to at some length. But to me the story became more interesting when I zoomed out and starting paying attention to the mass, and picking out details to relate to the people online. I really began to feel a part of the space, and was breathing with it as a whole.

There were also quite a few memorable online moments that came about. The story from @powhida about having his jaw broken years ago in Syracuse, @gregorg trying to rally a flash mob for me, @maritzkim telling me about the road trip she was on, @luisaisawesome citing statistics about the number of people that travel through Port Authority on any given weekday (200,000), and a lot more.

JH: While #24hPort is clearly about the idea of using social media as a tool for art, I can't help thinking about it in the context and legacy of Fluxus with its emphasis on the everyday, the accidental, etc. Does this resonate at all? What sort of artistic lineage would you situate yourself in?

MB - I resonate with Beuys, Abramovic, Wolfgang Laib, Laurie Anderson, David Adamo, Zen etc., but also with Bill Hicks, Duchamp, Ubu Roi, Anne Bogart, the Fool and a host of others. In that sense I'm a pretty diverse and potentially contradictory mash-up. A sort of bastard child of all and none of the above.

JH - Shane calls you "one of the most active (social) media artists today". How does this moniker sit with you?

MB - Which moniker?! active? social media artist? artist? ;) In general I'm not a fan of the term "social media artist," but I'm not really that big on labels either. Typical! I'm not sure if what I'm doing is even performance art for that matter. Sometimes I refer to them as "performative actions," but that seems a bit pretentious. Yet "events" is too informal. So far I haven't spent too much time thinking about descriptive words. Over the past year and a half, I've made the very conscious decision to create as much work as I want, to allow my process to be visible, to have fun, and to get the work seen. A lot of this work has involved social media. Between my drawings, collages and performances I put in 8-14 hour days, 7 days a week. All of which is to say, yes, I suppose I am pretty active. And I love it!

JH - Well, you've done eleven twitter performances in the past year and a half. How would you characterize the critical response to this practice over that time (are people getting more comfortable/knowing)?

MB - The critical response has been mostly very positive. I do think awareness and understanding are on the rise, and that it's just a matter of time.

For more information on the upcoming projects at Creative Time, go to http://www.creativetime.org/