I have a personal confession to make: I adore Captain Paul Watson. Now this may not come as a major newsflash to those who know of my avid support and deep admiration for the man who has devoted his life work and given tirelessly to the ocean conservation movement since his early days as the youngest founding member of Greenpeace -- a fact some Greenpeace archivists sometimes prefer to tritely omit. Of course history speaks for itself and Captain Paul Watson and The Sea Shepherd Conservation Society, which he formed in 1977, have championed the cause for several decades as is evidenced in Peter J. Brown's new film, Confessions of An Eco-Terrorist which received rave audience and press reviews at a screening in conjunction with the recent Cannes International Film Festival.

As the longest serving crew member ever aboard the Sea Shepherd with a highly impressive personal resume and film career in his own right, Brown takes viewers into the lighter, more humorous aspects of the "eco-terrorist" sub-culture in his feature documentary film that is due out in theaters later this year. From poking fun at disgruntled vegans to emphasizing the often quirky antics used through the years to irritate the hell out of some of the ocean's greatest foes, Brown highlights the trials and tribulations of what it takes to be a genuine eco-warrior on the high seas. Yet perhaps the film's greatest strength lies in the portrayal of Watson as the epitome of magic maker -- a gift which he no doubt possesses along with a fair share of luck, a stroke of genius and a more than decent internal compass.

With Watson's ever growing list of campaign success stories and recent wave of media domination, Confessions of An Eco-Terrorist offers a thorough glimpse into the not so glamorous behind the scenes life aboard the Sea Shepherd long before Animal Planet began documenting the more recent day crusades to end illegal Japanese whaling in the Southern Ocean Whale Sanctuary in the hit TV series, Whale Wars.

Brown's compilation of 30 years worth of footage illustrates the number of successful victories that Watson and crew have pulled off over the years and has captured the essence of that which has led to the creation of the modern day Sea Shepherd Conservation Society. From facing down angry Canadian seal pup bashers and bringing the outdated industry to the brink of economic extinction to tackling shark poachers head on in Cocos Islands to taking on the ferocious whaling activities of Norway, Russia and Iceland to the triumphant creation of a Galapagos marine life sanctuary and shutting down illegal drift net and long line fishing practices on a global scale, it's as if Watson could have written the tale of David and Goliath himself and leaves one wondering just who the real "eco-terrorists" are here.

With Brown's strategic expertise in the film industry, there is certainly no doubt that the sassy title was intended to stir up some controversy. That is after all his forte. In April, Watson expressed mild concern over the title of the film but stated that he believed Brown chose it as a means to attract attention. "It's Peter's film, and if this is his perception and his project, then I am fine with that," he added. Recent reports indicate that Watson is in fact thrilled with his lifelong friend's efforts and was on hand with Brown to answer questions at the recent press event in Cannes.

Watson, who has presented talks as an invited guest of the FBI on issues of eco-terrorism explained his stance on the controversial label which opponents enjoy flippantly throwing around in a blatant mockery of its truest definition. In a recent article for The Ecologist, Watson shared with me his thoughts on the subject:

"They can either arrest me or shut the hell up. This charge of 'eco-terrorist' is nothing more than public relations rhetoric. I have never injured a single person nor have I ever been convicted of a felony nor have we ever been sued in civil court. Why? Because we target poachers. We intervene against criminal operations and we do so in accordance with the principles established by the United Nations World Charter for Nature." 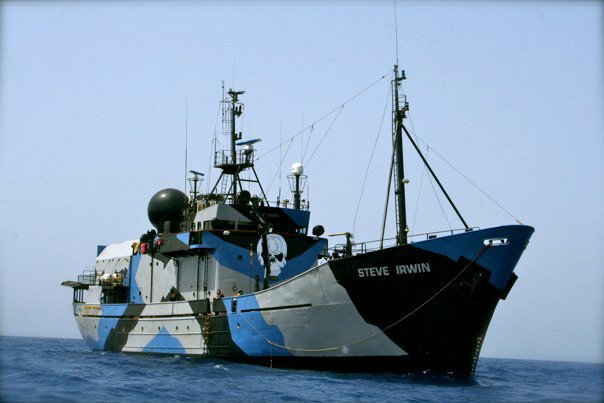 I had a chance to crew upon the Sea Shepherd this Spring on a one month transit from Perth, Australia to Cannes, France where we pulled up in style aboard our recently camouflaged former Britsish patrol vesssel, The MV Steve Irwin. While local media couldn't get enough of the "barge" anchored amongst posh luxury yaughts owned by wealthy tycoons and corporate moguls who would rather invest in leisure activity than fulfill any sort of planetary obligations for future generations, the crew of The Steve Irwin were well received by local media and supporters who came to tour the ship, many who offered small donations and provisions to our volunteer crew of international citizens.

Reflecting back upon my youth, it appears I was slated early on for this path of so called Eco-terrorism. Perhaps my highly sophisticated background training from The Girls Scouts of America should have been a red flag as all those Kumbaya campfires sessions can really instill a sense of respect and love for Mother Nature and should not be taken lightly. I suppose all those family excursions into the great outdoors as a child can also be to blame and when I decided at the ripe old age of 12 that I was no longer comfortable eating my friends, Mom and Dad without hesitation accepted my decision to turn vegetarian. Ah yes, the early warning signs were all there.

Fellow crew member and long time celebrity supporter Michelle Rodriguez even graciously hosted a private fundraising event at a private villa where the crew enjoyed some much deserved down time before heading out to defend the last of the Mediterranean Bluefin Tuna who are on an increasingly dismal fast track towards what scientific experts have referred to as an "inevitable extinction." 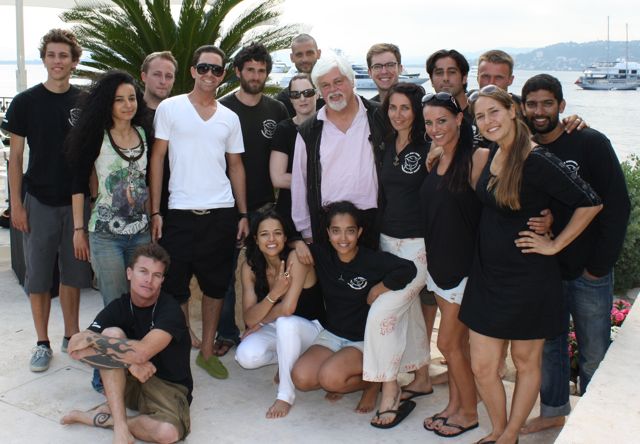 As the only American female aboard I learned quickly that ship life is certainly not for the faint hearted, but nonetheless rewarding on several levels. Leveraging sea sickness with hard labour, run-ins with Somali Pirates, excruciating Equator heat and 3 am daily wake up calls can certainly prove challenging to the inner princess, however at the end of the day it was both a pleasure and privilege to serve aboard the flagship vessel of my all time hero and an experience that will last with me a lifetime. I have volunteered for numerous organizations in the past from tsunami relief work in the wake of the 2005 Asian disaster to building Habitat homes in sweltering El Salvadorian summer heat to jaguar tracking in the unforgiving Mexican Selva Maya rainforest and yet the Sea Shepherd crew experience was by far the most intense. The individuals that make up "Neptune's Navy" are hands down the most passionate, hardest working, no-nonsense folks from all walks of life that I have ever encountered during my time in the field. I can't help but be left wondering what they put in that Vegimite stuff after all! 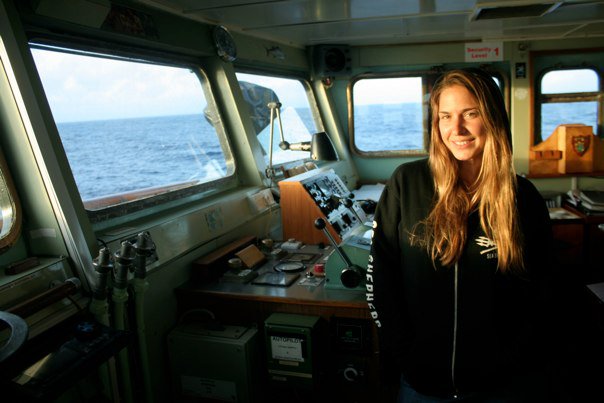 There are no words to express my gratitude to Captain Paul Watson for his valiant pursuit of defending those who can not defend themselves. He will no doubt be remembered by history as a trail blazing pioneer of the modern day direct action environmental movement and society should be so truly honored to be amongst a living legend in his own time. As I write this today from the Tuscan countryside -- not exactly the normal stomping grounds of fellow terror enthusiasts as say Kandahar or Karachi, I think of my fellow Shepherds who are currently headed into a war zone off the Libyan coast for the latest campaign, Operation Blue Rage II.

Perhaps "Terra-ist," stemming from the latin origin for all things related to the Earth, is a more suitable term to describe those of us who consider this majestic planetary home of ours and all the splendid life form that reside within worth standing up for at all costs -- just a thought.

Tune in to see Watson and his crew historically shut down the Japanese fleet in some of the fierest conditions on the planet as Whale Wars Season 4 premieres on June 3rd.