In celebration of National LGBT Pride Month, I thought I'd pull together a list of my favorite LGBT characters from movies and TV shows. This is by no means a comprehensive list of the best of all time, and for once I didn't include a list of things that I dislike. These are just the characters that, for various reasons and in no particular order, are important to me. Happy Pride!

Show Me Love perfectly represents the relationship between someone who's been out of the closet for a while and someone who's just coming out, as well as that between a popular kid and a dorky loner. In this movie, as in real life, it's really fucking awkward - priorities, experiences, and expectations are all in conflict, and more often than not someone gets burned. Agnes, the out lesbian and dork, suffers a great deal at the hands of her classmates and sometimes-girlfriend Elin. Meanwhile, Elin has to decide whether to come to terms with being a lesbian (or bisexual; the movie didn't make it clear, which is fine) or take the easier way out and ignore it. Watching these two girls come to terms with their relationship and what it means in a small, conservative town is simultaneously frustrating and refreshing, especially for anyone who's ever been in either position. The movie also ends on a more positive and generally normal note than most lesbian movies, which usually end in at least one death.

I have a lot of issues with Glee, which some people say makes me a horrible person, but I say makes me a person with taste. That show is disorganized, inconsistent, off-putting, cliché...everything I hate. But I'm absolutely one of the 22.5 million YouTube views of Glee's cover of the otherwise wretched song "Teenage Dream," the performance that kick-started America's most famous gay teen romance.

Better bloggers than I have already gone into how important this moment was in LGBT history. While slope-nosed little Kurt fulfills and celebrates every stereotype of a young and flamboyant gay man, which doesn't exactly break down any barriers; Blaine fulfills every stereotype of the Jake Ryan teenage stud, and is gay. Young gays everywhere finally have a mainstream portrayal of a young couple to imprint on, the way straight teenagers have in every other movie and tv show ever made.

Ma vie en rose comes to us from Belgium, and tells the story of young Ludo, who was born male but tries - with varying levels of success - to live as a girl. He tries to rationalize the mistake of being born in a boy's body, concluding that his second X-chromosome must have gotten accidentally tossed in the garbage; voices his plans to marry his friend and neighbor Jerome when he's finally not a boy; and loves dresses, makeup, and the not-Barbie-not-even-a-little-bit doll Pam. 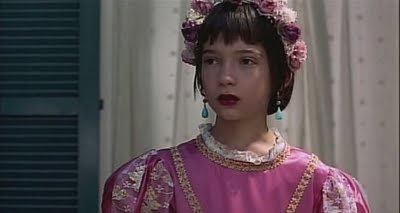 Ludo can also rock the fuck out of a bowl cut. Top THAT.

Ludo's father is an excellent character as well, whose gradual transition from disbelieving intolerance to celebration of Ludo's identity feels totally honest and real. Honestly, the only moment that this movie doesn't feel honest is when Ludo's mother swings from amused tolerance to straight up violence and back again in the space of, like, 3 minutes.

Part of the reason Sal is on this list is that I desperately covet his wardrobe. That man defines middle-aged fierceness in a way that I can't even deal with. 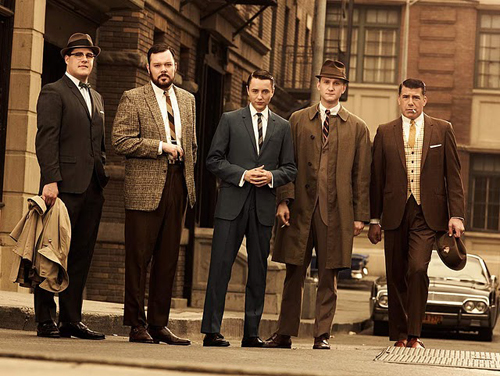 Except for Sal (far right), everyone in this picture looks like a damn chump.

In an office full of funny but willfully superficial people, Sal stands out as a true wit and aesthete. He usually has the sharpest put-downs, but can also be kind, indulgent, and quite thoughtful. It's also constantly amazing to see this man, who anyone in the 21st century would assume to be gay, totally pass for straight in the 1960s. There's a sharp contrast between the societal stereotypes from 50 years ago and those of today, which I find alternately hilarious and generally interesting. Unfortunately, Sal's no longer on the show, but I'm holding out hope that Don Douchebag Draper will need an excellent and delightful art director in the near future.

I mostly love this couple for the Crate and Barrel scene, which is not available on YouTube so you'll just have to watch the whole damn movie. You're welcome.

I almost don't want to include Omar in this list, because he's such a larger-than-life character that he almost doesn't feel real (you know what I mean); but I just love him so much. Omar is the most feared man on the mean streets of this version of Baltimore, mostly because of his facility with a shotgun and his general devil-may-care attitude. But when drug kingpin Avon finds out that he's gay, he immediately increases the bounty he already put on Omar's head; and eventually Omar's boyfriend is caught, brutally tortured, and murdered to bring Omar out of hiding. As of season 3 Omar is still on a crusade to avenge his beautiful boyfriend's death, and The Wire treats this crusade with a certain reverence and understanding usually reserved for those to avenge a female love interest.

Detective Kima Greggs gets her sexual orientation constantly thrown in her face by resentful thugs (somehow everyone in the whole city knows that she's a lesbian), but is also well-liked and respected by her colleagues for being such a good cop. From what I can tell, she's beginning to serve as the female counterpart to de facto star Jimmy McNulty - for both, the job that they're excellent at comes first; and for both, personal/domestic interactions are uncomfortable and difficult. In other words, she's an imperfect but deeply relatable character in a cast full of them. Also, she is a stone fox. Which doesn't hurt. 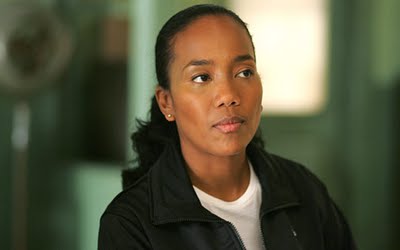 Waging a war on drugs with her cheekbones of justice.

Gareth and Matthew, Four Weddings and a Funeral

As far as I'm concerned, these two set the gold standard for relationships in general. Their personalities and friendships are what drive their characterization, not their orientation; and Matthew's grief at losing Gareth is the most emotionally stirring point in the whole film. I dare you to watch this scene without crying. (But seriously, if you don't cry, we are not friends.)