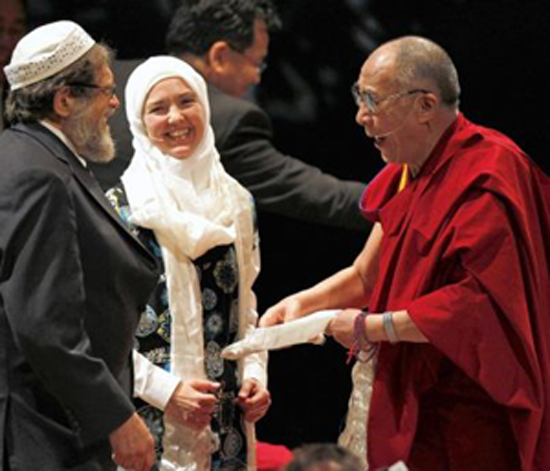 The Dalai Lama speaks with Rabbi Michael Lerner, Jewish theologian, chair of the Network of Spiritual Progressives SpiritualProgressives.org, and editor of Tikkun magazine Tikkun.org, and Ingrid Mattson, former president of The Islamic Society of North America and professor at the Hartford Theological Seminary, at the conclusion of Monday's event at the Harris Theatre in Chicago. (JosÈ M. Osorio, Chicago Tribune / July 19, 2011). The Dalai Lama was in the process of putting a Tibetan prayer shawl on Rabbi Lerner's shoulders.

I was honored to be invited to be on a panel with the Dalai Lama this week in Chicago. This is the third time I've been invited to be on a panel with him, and by now he recognizes me. His first words when we embraced yesterday were: "Last time your kippah was red, now it's white -- but very nice!" He was referring to the head covering that religious Jews wear on our heads, also known as "yalmekah" or skullcap. He had his usual twinkle in his eye and smile on his face. This great spiritual leader is renowned for his impish qualities, his humility, and his smarts, and all were in full view both Sunday, July 17th, when he addressed some 8,000 people in a huge auditorium in Chicago, and on Monday when we sat together on a panel in a smaller venue of 1,500 seats, every seat filled, and discussed interfaith connections.

Unlike Sunday, when the sound system was imperfect and it was sometimes hard to make out what he was saying, on Monday July 19th, it was impossible to not be astounded by the Dalai Lama's combination of cleverness and spiritual depth. His themes are well known, and he returned them over and over again: the need for compassion, the importance of recognizing that all religions are pointing to the same realities, the centrality of non-violence in changing the world, and the need to work on one's own spiritual life simultaneously with any work in changing the world.

Panel members with me were:

I'm not going to try to summarize here all of the fascination conversation that took place, though if I hear of a way to get you a video of the event, I'll send you the link.

What for me was particularly wonderful was:

Personally, I was very gratified to learn how closely aligned the Dalai Lama was to the ideas we at Tikkun and NSP have about how best to heal the conflict in Israel/Palestine. He personally told me he would read my new book Embracing Israel/Palestine which should be in the bookstores by early December 2011. He mentioned that he was particularly glad that I had used the term "embracing" in the title, and enthusiastically agreed that we need not just a political settlement but open-hearted reconciliation based on acknowledgment that both Israel and Palestine have legitimate narratives and both communities have co-created the current mess.

At one point, the Dalai Lama expressing his approval of what I had to say about developing compassion for all beings including those who are community have labeled our "enemies," pointed to my beard and kippah and said, "You have the hat and the beard that makes you look appropriate, and you have the ideas that are so badly needed in Israel/Palestine. You should go to Jerusalem with your new book and teach your perspective there!" I said, "I will, WITH YOU!" It remains to be seen if this can happen, but he didn't say no. One Chicago-area rabbi in the audience told me afterwards that if he and I went together to Jerusalem, we could have a huge impact. That didn't convince some of my family members who believe that the dramatic increase of extremism both in Israeli society and in the government have created a climate in which I could easily be killed or maimed by some of the fanatics. It is precisely my insisting on the humanity of the Palestinian people that leads many of these extremists to label me not only a self-hating Jew but an actual anti-Semite, and then, as you'll recall, to attack my home three times in the past year.

But I can't not say what my religious tradition teaches me: that every human being is equally created in the image of God, and that God cares equally for the suffering of the Palestinian people as for the suffering of the Jewish people. So I can't adopt the line of some of the more popular pro-peace pro-Israel organizations that simply frame the issues in terms of what's best for Israel. True enough, we've argued in Tikkun that Israel's self-interest, and the self-interest of the Jewish people, would best be served by an end to the Occupation and peace with Palestine. But unlike those other organizations who believe that they only way they can gain "credibility" is to stop there, I and we in Tikkun and the NSP have to also testify to a spiritual vision in which all people are embodiments of the sacred, and all people deserve to have their fundamental needs met. As I pointed out in my comments at the panel with the Dalai Lama, our Jewish particularism as understood by many of our Prophets is a universalism. As Isaiah, quoting God, told the Jewish people some 2700 years ago, speaking about God's house (the ancient Temple in Jerusalem) and what it would become in the future: "My house shall be a house of prayer for all the nations." Not that all the nations would become Jewish, but that all would with their distinctive ways of being and praying and understanding God be equally welcome into God's house!

So my new book is an attempt to take that approach and apply it to the current struggle in Israel/Palestine. I'm hoping that some of you might help me find venues to talk about these issues and about my new book in your own community sometime between the 3rd week of November and the 3rd week of February (or even later) at a college or university, a bookstore that does a good job of attracting lots of people to a reading by a visiting author, a church, synagogue, mosque, ashram, community center, or wherever someone can arrange to get a book-buying audience! If you can help make this happen,or can help us get your local newspaper to review the book or local media to interview me about it, please contact Natalie@tikkun.org and let her know.

Meanwhile, it was wonderful to connect with so many beautiful people, a diverse crowd of "middle Americans" who, like so many people all around the world, are hungry for the kind of spiritual wisdom that we all participated in this past Monday, July 18, 2011. With all the craziness coming from Washington D.C. , it's good to remind ourselves of the fundamental decency and goodness and spiritual aspirations of so many of our fellow human beings on this planet.

Rabbi Michael Lerner is editor of Tikkun, chair of the Network of Spiritual Progressives SpiritualProgressives.org, and author of the forthcoming Embracing Israel/Palestine (North Atlantic Books, December 2011). He is rabbi of Beyt Tikkun synagogue in Berkeley, Ca. and welcomes responses to his article at RabbiLerner@Tikkun.org