It is no coincidence that the two main success stories of the "Arab Spring" -- Egypt and Tunisia -- were both non-violent and non-western in nature. These anti-authoritarian protests across the Middle East and North Africa have been a time of awkward shuffling for much of the western world, and for the Obama administration in particular, which had been quite content with the status quo of corrupt, repressive dictatorships in the region while putting a polite face on the continued militarist and corporatist policies of the Bush era. Nowhere did this become more evident than in the tiny Gulf nation of Bahrain, where I headed in early March to join the demonstrations and learn about this unprecedented uprising in a Gulf country. 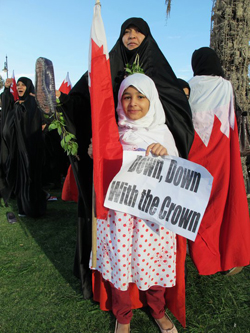 Around that time, it was an almost festive occasion -- men and women, young and old alike gathered in Pearl Square, bearing signs like "Down Down with the Crown," holding flowers and waving the red and white colors of the Bahraini flag.

Soon after arriving, I was given a gift: a button that read Not Sunni, Not Shi'a, but Bahraini."

Tents were erected where the men smoked sheesha, grilled kebabs, and listened to the radio for news about the chain reaction of uprisings all over North Africa and the Middle East. Watching ordinary citizens marching in human chains, chanting pro-democracy slogans, and protesting in front of government buildings, I was possessed by a sort of surreal joy -- surreal because everyone in the streets knew that this couldn't possibly last, that the Bahraini monarchy would not abide such dissent, no matter how peaceful and non-violent. Everyone was right.

During a speech to the State Department, President Barack Obama claimed that "America's interests are not hostile to people's hopes; they're essential to them."

Perhaps he could have been clearer as to which "people" and what "hopes," he was referring to, for shortly after I left Bahrain US Secretary of Defense Robert Gates arrived in Saudi Arabia, and on his heels, tanks from the House of Saud in a demonstration of force that sent an unequivocal message to the citizens of Bahrain: "change" would not be tolerated.

By late March, Pearl Square had literally become The Martyr's Square, the monument itself destroyed, a once jubilant and hopeful atmosphere in shambles. Since then, in the home of the US Navy's Fifth Fleet, dozens have been killed, over a thousand Bahrainis (and counting) arrested, close to thirty Shi'a mosques have been destroyed, and a campaign of targeted repression against all segments of society has continued with nary a peep from the Obama administration. If this were Libya, and not Bahrain, we can rest assured these abuses would be trumpeted with frothy indignation as further justification for NATO's intervention. But this is not Libya, this is Bahrain, where "people" and "hopes" mean different things. 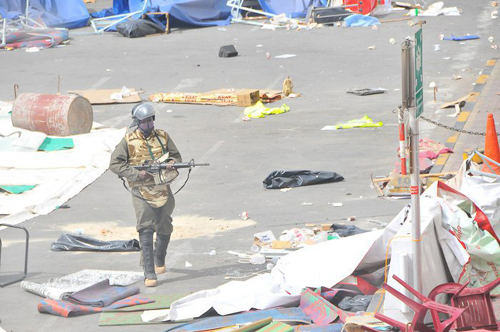 Indeed, in a nod to his Gulf Arab masters, president Obama referenced Iran in relation to the Bahrain protests, a country which he claims "has tried to take advantage of the turmoil there [Bahrain], and that the Bahraini government has a legitimate interest in the rule of law" -- a shabby apology for the brutality of Saudi forces intent on sending a warning to potential protestors in other Gulf Arab states. Because the Sunni royal family rules over a largely Shi'a population, they have been eager to point fingers at Iran and Hezbollah rather than face their own inadequacies in governing their people, who protest not for any sweeping revolution, but for greater freedoms in education and in the economy, the same issues affecting youth in places like Tunisia and Egypt.

Bahrain is the face of a US foreign policy not guided by any benign democratic principles, but by opportunism -- one beholden to the unctuous Gulf monarchies, that belies president Obama's pleasant speechifying, and makes him very much a partner-in-crime against the ordinary people of Bahrain.

The mainstream western media has willfully ignored the continued abuses in Bahrain, and al Jazeera, which had provided the most robust coverage of unrest in Egypt, Tunisia, and elsewhere, has also been conspicuously silent on the repression in Bahrain. Small wonder, when you consider that al Jazeera is owned by the royal family of Qatar, another Gulf monarchy made uneasy by change in the region. Fortunately, courageous activists on the ground in Bahrain have linked up with concerned citizens from around the world to create awareness for ordinary people removed by thousands of miles and blinded by the smokescreen of media obfuscation. I encourage you to visit the websites below, to sign the petitions, and to subscribe to their mailing lists to stay aware of a truly democratic revolution happening despite the best efforts of the oil monarchies and their allegedly pro-democratic American clients.

Campaign for Peace and Democracy