If you ever work as part of a committee, team, or task force, you may want to circulate the following case study:

According to the masthead, the artists and writers for MAD Magazine are collectively known as "The Usual Gang of Idiots." In the interest of full disclosure, I am obliged to tell you that I am one of MAD's writers. As a member of that gang, I can personally verify that all of the members are indeed complete idiots.

But even idiots can be smart sometimes. For example, back in 1959, MAD Magazine ran a classic article that specifically dealt with market research. The article, written by Sy Reit and featuring art by Bob Clarke, was called "America's Dream Car." The premise was that people were dissatisfied with the current state of car design and therefore a little market research would produce some innovative new vehicles that everybody would love. According to the introduction to the article,

...MAD took a nationwide poll, asking people what changes they wanted--and here are the results of that poll. Using a composite model of typical American cars, we've indicated below what the public wants included in America's Dream Car.

Here's their picture of the average American car (remember, this was published in 1959.) 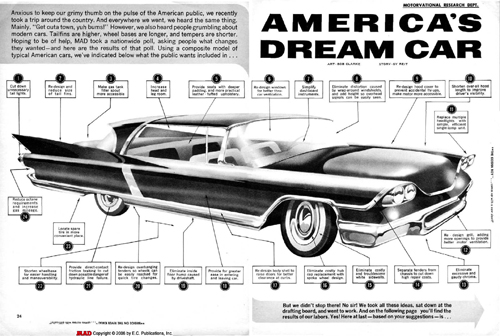 The boxes with arrows contain 22 suggestions that they gathered through their market research. Obviously, they're all made up by writer Sy Reit, but many of the requested changes seem like things that could have plausibly been said by somebody completing a survey, including:

That sounds like sensible feedback, right? Any sane marketing department would tell the design division to make those changes happen ASAP.

The article goes on to say that after conducting their market research,

...We took all of those ideas, sat down at the drafting board, and went to work. And on the following page you'll find the results of our labors. Yes! Here at last -- based on your suggestions -- is America's Dream Car!

Here's what they came up with: 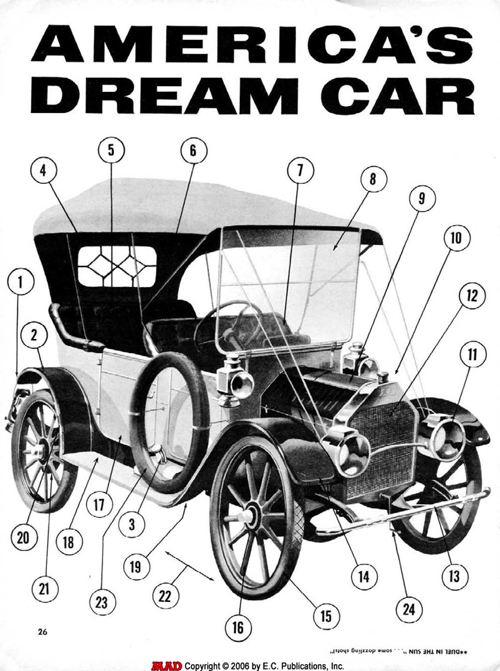 That one image is the perfect visual representation of the dangers of design by committee.

There's no denying that this "new" design takes all of the feedback into account: There's more headroom, the hood is shorter, the dashboard isn't cluttered with too many instruments, the tacky chrome and dated tail fins are gone, and the doors won't bang into the curb. But nobody in their right mind would say that the Model T is an improvement on, say, the 57 Cadillac. You'd have to be a real idiot to think that.

And yet, you've probably seen otherwise intelligent coworkers fall into the same trap that MAD warned us about over 50 years ago. Sometimes the trap springs when market research is misinterpreted, misapplied, or simply accepted as gospel without any further investigation. At other times, the trap lurks in a committee meeting full of people willing to water down a design or a strategy in the name of compromise. Whatever the case, the next time you see design by committee happening at your office, ask everybody if they want to build the visionary car of the future or the consensus-driven car of the past.