"There's always a story with you," was said to me the other day after a kind of dramatic day at LAX that makes Home Alone seem like an classic cautionary tale.

I'm on Delta flight something or rather, flying over Georgia, finishing off the last leg of my seemingly simple Christmas trip to Pensacola, Florida. Twenty-two hours later, we finally may make it. It's our family's first Christmas without my dad. And I am ... a wreck. I didn't think I'd be a wreck, but the way I'm carbo-loading in case I don't get to eat in 2012 tips me off that some inner wreckage is percolating.

His joy. His way. When I'm sad, he grabs my face in his hands and says, "Don't be sad mommy, you have me." It's funny (in like a crazy cuckoo bananas kind of way), how God pieces together the events of a life. How one thing couldn't exist and is still connected to another. Connected to each other.

He sleeps in my lap as I look across the horizon and think about this holiday season. That race from Thanksgiving to New Year's that descends upon me like a Mack truck. I know it's coming and yet I never feel prepared. Even with the all the weight, and the wheels and the horns blaring, I seem blissfully ignorant that yet another year is about to run me over. And then Thanksgiving day arrives and I have that "Oh Sh*t" brick in the stomach, keening thing that takes over my body. This year, particularly so, people have asked me: "How are you doing?" "How is it going?" They imply, "without your dad," but they don't say it. Some do, because I probably seem one-wheel-shy-of-a-barrow. How am I doing? It arrests me. I don't really know how I'm doing. I don't really know what I'm doing. Or how to feel. I know how to make plans. And show up. And get out of bed ... kind of.

I don't always say the words. But that's how I feel, inside. That's how I'm doing. I just keep coming back to that phrase. In my mind. Of how I am. Like Mary Katherine Gallagher, holding my arm pits, nervously smelling them and launching into a Sally Field epic monologue:

"My feelings about the Holidays can best be expressed by a soft pair of Russell tapered leg drawstring cotton sweatpants that were popular in the mid 90's and available for clearance at a Russell outlet center near you in the Florabama region."

The year 2011 will be forever known as the turning point of my life. And I don't just mean about the absolute and utter despair over losing my dad so suddenly. I am sweatpants. And I don't just mean it as in a "delicious vegan meal" at Cafe Gratitude that I've been frequenting this season, which may be putting me in the mindset of declaring myself in different fashions: "I am ... awkward." I am ... vibrating." I am sweatpants. Just can't escape it. As a woman. A mother. A daughter. In my career. In my relationships. In love. In some ways (no offense to you guys), but this outlet isn't the appropriate place to divulge. Everything. And I mean everything has been turned on its ear. This year. The things I thought to be true were challenged. The things I want to pursue seem possible. My voracious appetite to create can no longer be squelched. The way I view life, and love, people, and God. And flowers. And clouds. And sunglasses. Have all just -- I don't know. Become so much more full. And without judgment. And real. Joan Didion so excellently titled her book, The Year of Magical Thinking. She wrote it after she suddenly lost her husband. And that's just it. It's magical. Technicolor. Like when Dorothy peeks into OZ after that dastardly chase from the witch-y neighbor and the frightful Tornado that whisked her away. She sees: color. Creatures. And life. As she's never known. I get it. That moment. The moment I heard the news (about my father), it was like I was swept away and dropped into ruby slippers in another world. A reverse-process affect. I feel like I KNOW things now. And yet I know nothing. I know true pain. Yet I don't know how to fix it. I empathize with people on a whole new level. Yet I don't know what to say. Sadness. Joy. Laughter. The full spectrum of life seems to happen. I think I just am learning how "to be." In it. Dinner conversations are encumbered with "the real." And I'm okay with that. Meals now consist not only of food, but usually a starter course of salty tears (sadness) and by dessert, sweet tears (laughing)..There's no, middle. It's all... it-all. 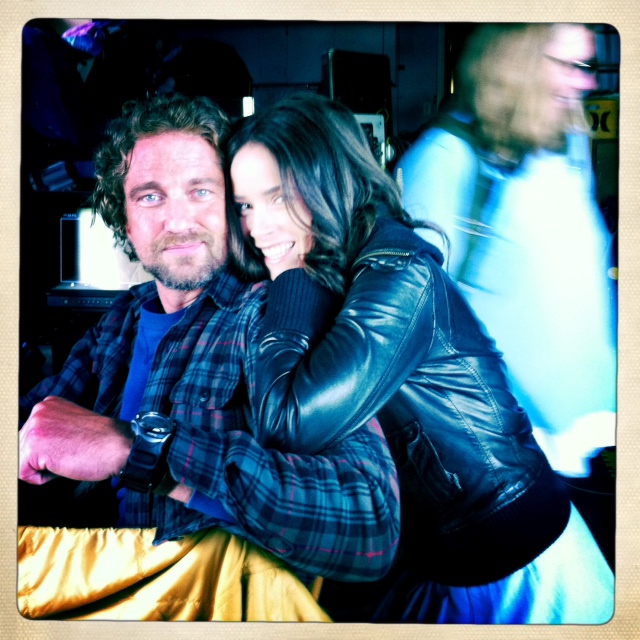 gerard butler & i on "of men and mavericks" set.

Thanksgiving started with a wrap. I finished the Curtis Hanson/Walden Media, Brandon Hooper-scribed, Gerard Butler-starrer (who is okay... but it was scary!) film Mavericks late Thanksgiving Eve, along with amazing Jonny Weston, Levin Rambin, and Elisabeth Shue. Curtis got sick while we were shooting. I'm so glad I got him before he had to leave set for awhile. I pray. Pray, he gets better soon. Gerry is just. Amazing. He's the real deal in every way. It's a beautiful true surf story about Mavericks and Jay Moriarity. A tribute movie for me personally. The highest highs. And very emotional. 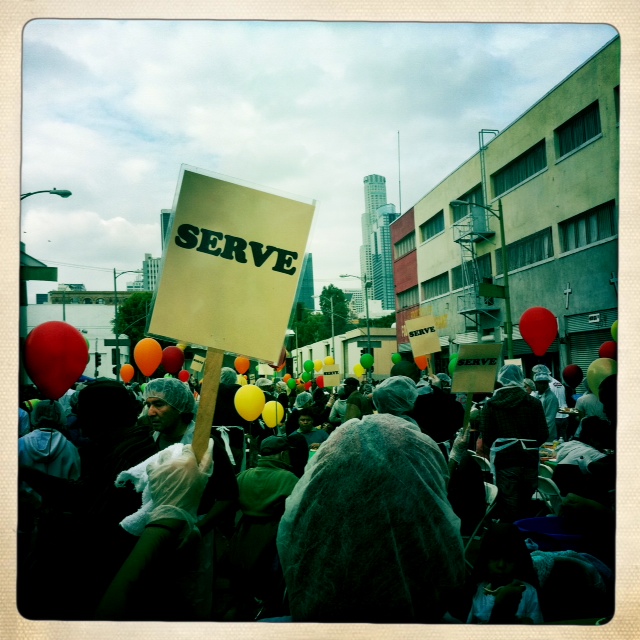 Anyway, I get on a plane Thanksgiving morning and high-tail it to LA. To deal with the keening and lead stomach-ing, I figure my first Thanksgiving without my dad will be full of service. That's all I know to do. Serve. I head to the Midnight Mission downtown to help Mayor Villaraigosa and Carmen Trutanich (Los Angeles DA-elect) serve food for hours. We didn't run out of people or food. Thousands in need and giving thanks, but a few miles from my LA home.

Then I go over to Cafe Gratitude to experience a different kind of service. A friend runs the joint, and invited me to experience a Gratitude tradition: they were serving free food from 11 to 3 to patrons. Anyone who came by. No one would be turned away. It was a little jarring at first, I'm not gonna lie. A place for profit, just "giving" things away. But, it was cool. All the servers were volunteers. There was spontaneous singing and "magical moments." It was a place to converse and be served a healthy meal. Lots of laughter. A few tears shed (I wasn't the only one, I swear!) And it was packed to the brim. People just wanted to give and partake and be a part of the Vegan Thanksgiving Delight. It was a success. I don't know how they keep doing it there ... but they are doing it, doing it, and doing it well... (Thanks LL) 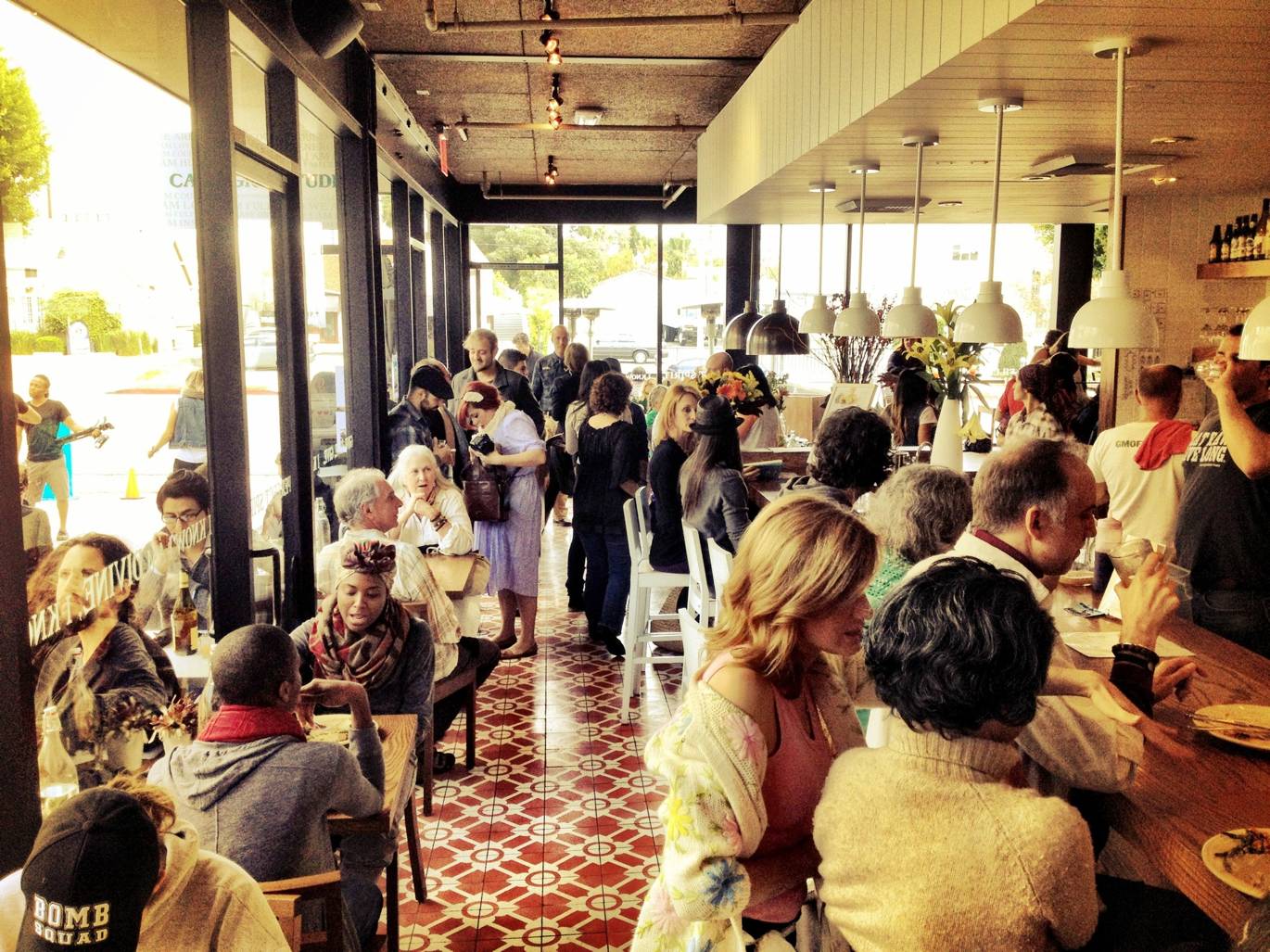 I then go off to visit my dear friend who also lost his father this year. That's been happening. I don't know if I've just tipped the age bracket where we start losing people, but I don't think so. Several of my friends have lost their fathers too soon for various reasons this year. Illness. Sudden disaster. Unexpected anomaly. I actually had never lost anyone close to me before my dad died in February. And now it seems that I am surrounded with loss. And able to be a person amidst the cloud of witnesses for the hurting friends, to just -- be there. And know. Because you don't really know. Until you know. Unfortunately. It's like when I had my son. I just didn't know. You cross over to the other side. And those who have experienced it just know. And you share a knowing look. And that's all it takes. An extra watery duct in the eye-sphere. A special glance. It's a wordless club. Extra space in the chest for the broken heart. And heavy sighing. I was comforted to be near him, and his new baby, and his family. Just being there was like a big pair of cashmere sweatpants. Just loving him, and his family loving on me, because I couldn't be near my own. Then, because of the way there's no traffic in LA on major holidays, I high-tail it downtown to the UgandaProject loft. And feast with my friends. Matt Gould and Griffin Matthews, who dedicate their lives to the artistic and educational wellness of those around them, particularly in Uganda. I wish I had been wearing sweatpants. It was delicious. After dessert, I moved on to a sweet spot couch chat with one of my best friends and their visiting mother, who I hadn't seen in ten years. Thanksgiving was full. And so have been the days that followed. 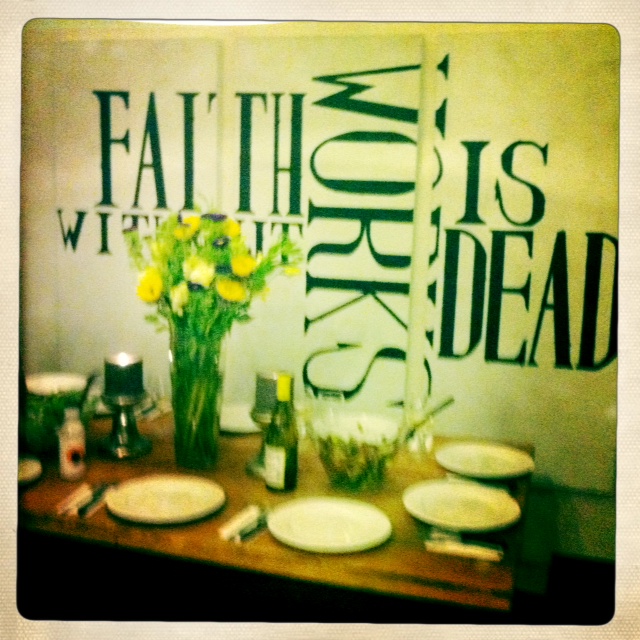 The mad dash just came about. Like, it must have been Christmas or something. Planning trips. UgandaProject having their Art & Gratitude fundraiser and skype-ing with the kids we support from Uganda. 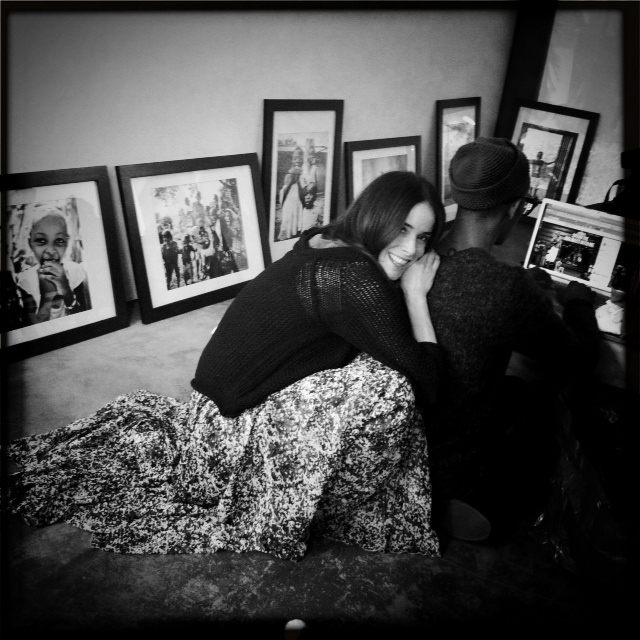 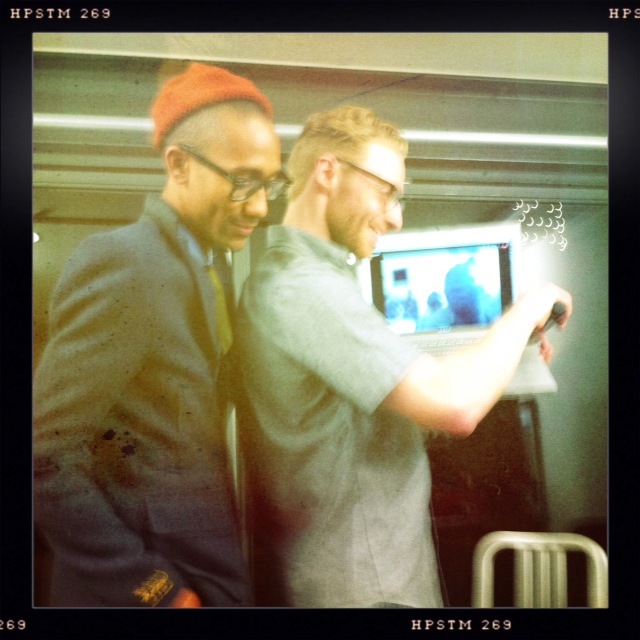 A friend's non-profit (TWLOHA) winning a million dollars at the Giving Awards. Investing in meetings. And reading scripts. And falling in love with roles. Convincing directors and producers to have me in their movies (I just got cast in a movie I am desperately excited about, will talk about soon!) And getting my son to his preschool, and the 16,000 events that coagulate around the holiday time for him. And the parties. And the grieving. And the good movies that come out. Never enough time to see all the things. All the things I want to see. And do. And be. And yet here I am. It's Christmas. I'm in Florida. With my brothers. And my mother. And my son. And we are enjoying each other in new ways. And accepting each other. In our sweatpants.

So yeah. Holidays. How am I doing? I am sweatpants. As I think about this unlikely fashion choice, I think of their use. Where I see them. In use. Athletes are always in sweatpants before and after their games or heats or bouts or matches. Boxers. Basketball players. Swimmers. Gymnasts. Olympic level sweats are designed within an inch of their life. And represent nations. The R&B/Hip Hop culture have made sweatpants couture. I particularly like dressing mine with a Line leather jacket and George Esquivel everyday brown boots. Sweatpants are the warm-up and the cool down. You can even have another layer under them, so you're always ready. Always ready to compete. Get in the ring. Sweatpants are really the cocoon in which the "zone-like moment" you've been training for incubates. Protects and encases your muscles and ligaments, so you don't pull something. So, I guess, what I am saying is, I'm in a perpetual state of "ready." If they had snaps down the inside, I could just tear them off and get to work. Maybe that's what I feel. I'm warming up. It's almost showtime. I am ready. So even though I may be photographed at various events, in rad Peter Som & Oscar de la Renta & Lanvin & Heidi Merrick & Boy delights styled by the amazing Brad Goreski. On the inside. I'm wearing sweatpants. Every look. Every style. Every season. I am sweatpants. 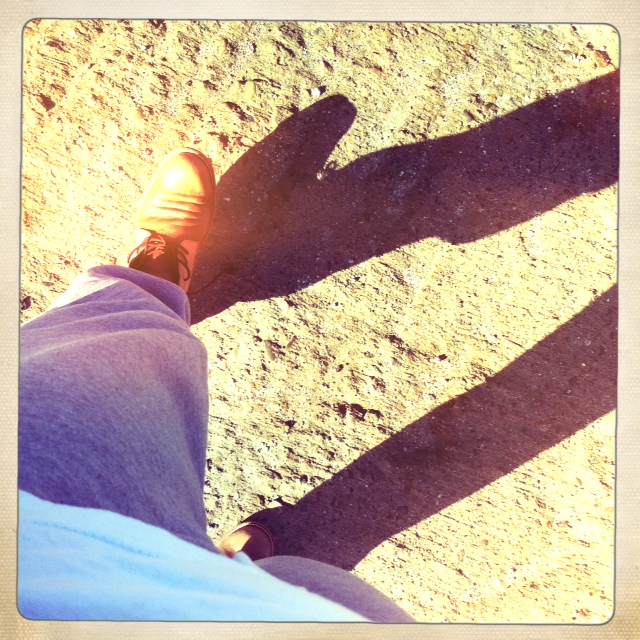 My little surf star brilliant brother Sterling Spencer was looking for some clothes to change into today. He went into my dad's bureau to find something since he was staying the night. As I passed by the open door, he was ruminating in what was a closet full of memories. A closet full of childhood associations to every article of fabric, I heard him say to himself, barely audible:

"Dad sure had a lot of sweatpants." 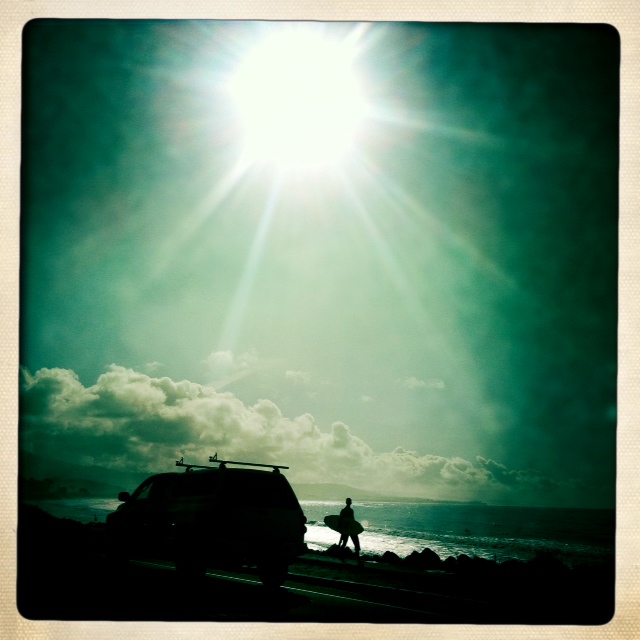