Last Thursday, I was exposed to a whole different world I had only heard about and never seen firsthand. When my friend and I arrived at Joint Base McGuire-Dix-Lakehurst, a military base in New Jersey, we were police escorted through the premises. I had never been to a military base before, and have had no immediate family members stationed or in the service. Fort Dix was its own microcosm, or inside world and community, with training facilities, office buildings, planes and helicopters, condos, and even a Burger King and Dunkin Donuts! I was headed to meet with military families who were getting to see a screening of the new iCarly episode, "iMeet The First Lady," featuring Michelle Obama. Nickelodeon and the White House have joined forces to bring awareness to ways kids can help support U.S. military families. On the show, Carly Shay, played by teen-pop star Miranda Cosgrove, is the daughter of an Air Force Colonel serving overseas in the military. In the episode her sidekicks Sam and Freddie (played by Jennette McCurdy and Nathan Kress) connect Carly with her dad on his birthday while he is overseas. This webcast catches the attention of the First Lady, Michelle Obama, over at the White House, who comes to the iCarly headquarters and partakes in some Random Dancing.

At the screening, 300 military family members filled a theater to watch the episode before it airs on TV this Monday, January 16th. The kids were given free iCarly swag such as logo-stamped water bottles, t-shirts, and glow sticks. Before the event started, Nickelodeon favorite, DJ J.Boogie, entertained the audience with some tunes, and helped the kids get ready to break out into some Random Dancing (a signature iCarly segment). Young children ran up and down the aisles of the theatre wearing smiles that took up their whole face and jumped around excitedly. As soon as the first verse to the theme song began playing, the room broke out into a sing-a-long.

I caught up with iCarly cast members Jennette McCurdy, Nathan Kress, Jerry Trainor, and Noah Munck before they hit the stage to screen the episode and do a question and answer session with the military families. I got the inside scoop about the episode, traveling, and what it's like being on the hit Nickelodeon show.

Jessica Norton: What was it like working with Michelle Obama?

Jennette McCurdy: We were all really nervous. We have never had anyone of that stature on set and in our presence before. We were told by the secret service that we couldn't make any sudden movements when she was coming on set. As soon as she walked on she called each of us by name, gave us each a hug, and made us feel at home right away. I think it set all of our nerves at ease.

Nathan Kress: It was really nerve-wracking at first. We didn't know what to expect. All of our aids and the secret service came up to us and told us how mellow and laid back she was. I felt like, she's a dignitary, she has to be poised and collected but as she was walking up she was like, "What's up you guys!" She was totally chill and very easy to work with. I've got to say, I was really impressed with her Random Dancing, very few people are willing to go crazy for that. She said her daughters taught her some moves so she wouldn't embarrass her self.

Jerry Trainor: When she showed up I was like, "I have to keep it together." But she made everyone feel very comfortable. She's very down-to-earth, cool, and she can dance!

Noah Munck: Michelle Obama is seriously the coolest person you will ever meet in your life. It's mind blowing to see someone of that status be so cool. We were all tense with the secret service walking everywhere and she walked in just in all relaxed and fun. It was awesome.

Jessica Norton: You have gotten to travel all over with the iCarly cast. What has it been like and where has been your favorite place to visit?

Jennette McCurdy: Nathan and I hosted the Kid's Choice Awards in Australia and that was incredible. But New York City is one of my favorite places. I think it's so charming and has so much character. I love Dylan's Candy Bar, The Metropolitan Mueseum, and The Plaza Hotel (and Eloise!). The other day we had dinner at John's Pizza, which was really fun.

Nathan Kress: As far as favorite spots go, New York is starting to top the list. Unfortunately I haven't been able to explore much but I had some New York style pizza, which was important, and walked around Times Square, which was also critical. But traveling definitely has to be one of the biggest perks of my job. I got to go on the Nickelodeon Family Cruise to Europe, and my whole family came, which was absolutely amazing.

Jessica Norton: What is it like on the set of iCarly and working with your producer, Dan Schneider?

Noah Munck: We rehearse three days, and we shoot two days. We have run-throughs with the producers every afternoon. Now I'm not the type of person that just busts out dancing, but three years ago I had to take my shirt off and dance on a table. It was kind of humiliating and awkward at the time, but it brought a lot of people self-confidence. We go back to film the next season in a few weeks, and we are all really excited.

Jerry Trainor: Dan is a tyrant. No I'm just kidding, he's awesome. We have a great relationship and we're always trying to prank each other. It gets goofy on the set. He's a comedic genius.

Be sure to check out the new episode of Nickelodeon's hit TV Show iCarly "iMeet The First Lady" featuring Michelle Obama this Monday January 16th, 2012 at 7:30pm EST.

A few snapshots from the event: 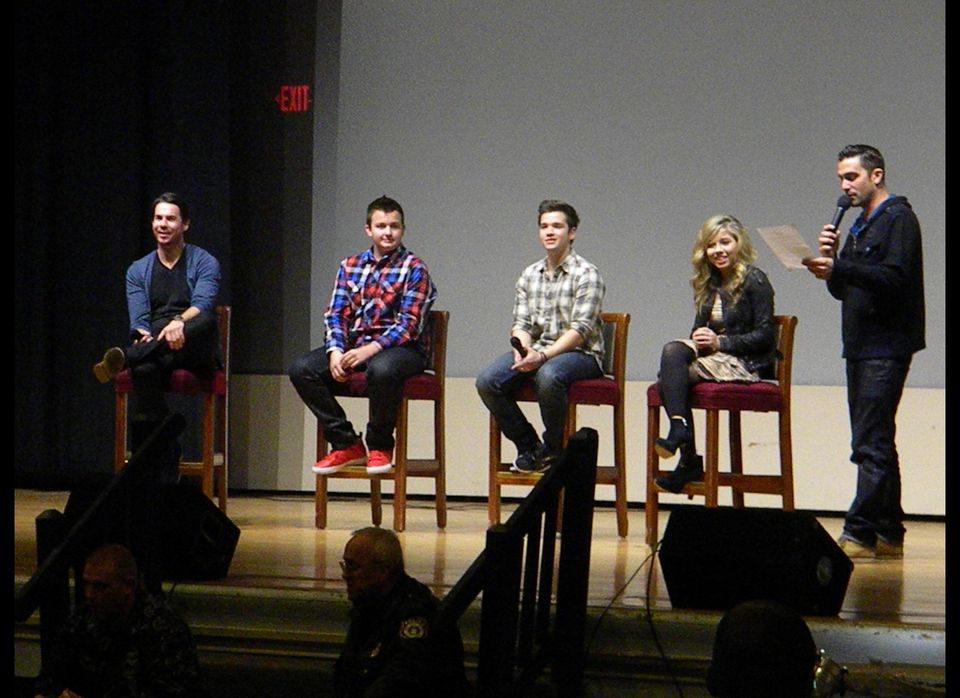