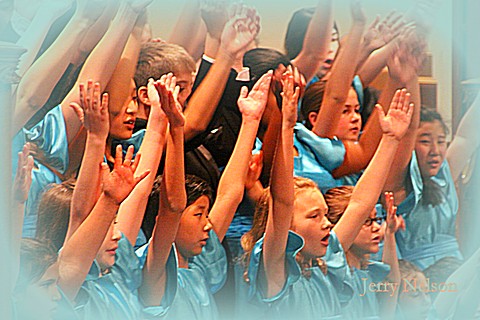 The "welcomes" and introductions were finished. The obligatory responsive reading was completed. The "housekeeping" chores such as announcements had been finally dispatched.

About 30 young people seated in the first four pews of Washington D.C.'s First Baptist Church rose as one. Quietly lining up they ascended the four steps leading to the chancel, turned, faced the people gathered and set the church on fire.

The occasion was the annual celebration of Martin Luther King Jr.'s birthday. Speakers of international renown were present. Leaders of each of the world's great religion were on hand to share briefly their particular outlook on MLK and his impact on the world.

But the highlight of the day was easily the kids. Performing a combination of spirituals, traditional hymns and modern gospel songs, the kids rocked the house. They had the confidence that comes only from performing in venues from Carnegie Hall to The White House.

The World Children's Choir (WCC) gives a voice to children worldwide. Through music, the WCC promotes positive international relations by asking people to work together to create a peaceful and healthy world for children. The young men and ladies of the WCC use art and music to explore cross-cultural differences and become peacemakers.

Founded in 1990 by the current Artistic Director and Chief Executive Officer, Sondra Harnes, the WCC brings children from many cultures and nations together in song. Seeds of a more peaceful world are sown and lives -- of all ages -- are enriched.

Some of the high-powered individuals that the choir has performed for include former U.S. presidents George W. Bush, Bill Clinton, and George H. W. Bush; President Barack Obama; Queen Noor of Jordan, Queen Sofia of Spain and Justices of the United States Supreme Court. Besides Carnegie Hall and The White House, they have performed at The Kennedy Center, Capitol Hill and national and international television broadcasts. In between all this, they have also participated in international concert tours and cultural exchanges.

* Singing with a Scottish rock band as the Million Mom March demonstrators arrived on the National Mall * Three White House Millennium performances in 14 hours * Frank Foundation dinner at Embassy of Russia -- WCC presented its Voices for Children Award to Mikhail Gorbachev * Singing in the National Missing Children's Day Ceremony, held at the U. S. Department of Justice during National Missing and Exploited Children's Week.

With choir headquarters located in Annandale, Va., the WCC will continue to travel the world in 2012 bringing the message of peace and hope to children around the globe.

If you would like more information or to learn how you can help, please contact the choir office: (703) 883-0920, info@worldchildrenschoir.org

As Harnes says, "We must dream of a world safe for children. We must dream every child can be free. Free from fear and free from pain. Free to run in the sun again. Free to play, to dance and to sing. Free to let their laughter ring. Life has blessed us and life is good to us. Now we must give, helping others to live their dreams."

Jerry Nelson is a nationally recognized photojournalist and adventure photographer. His work has appeared in many national, regional and local publications including CNN, USAToday, Upsurge, Earthwalkers and Associated Content and he is a regular contributor to Huffington Post as well as OpEdNews. Nelson travels the country seeking out the people, places and things that make America unique and great. Nelson currently is in Washington D.C. pointing his camera at OccupyDC and freelancing for The Washington Times the second largest paper in the nation's capital.