One year ago today, blogger Ian Murphy of the Buffalo Beast pranked Wisconsin Gov. Scott Walker by posing as billionaire David Koch on a phone call. As the crowds at the Capitol protesting Walker's bill to end collective bargaining were increasing in size and volume, the fake Koch inquired how Walker's efforts to "crush that union" were going. Walker's fawning response helped rocket the Wisconsin protests into the national media limelight.

Now the real David Koch reveals that crushing unions is indeed at the top of his agenda. In an interview with the Palm Beach Post, Koch talks about Walker, unions and the historical importance of the Wisconsin recall fight.

"We have spent a lot of money in Wisconsin. We are going to spend more."

Koch didn't know that when he sat down with Palm Beach Post reporter Stacey Singer that he was talking to a native Wisconsinite and University of Wisconsin graduate, who follows state politics closely. Singer knows that residents filed over one million signatures to recall Walker (almost half of the people who voted in the last statewide election) and that a spring recall election is likely.

Although the interview was slated to be about Koch's charitable efforts to cure cancer, Singer got in a few questions about Wisconsin. Koch acknowledged working hard on behalf of Walker. "We're helping him, as we should. We've gotten pretty good at this over the years," he says. "We've spent a lot of money in Wisconsin. We're going to spend more."

Koch may be referring to the efforts of AFP, his Americans for Prosperity Foundation, a 501(c)(3) "charitable" organization, which is up on air with another $700,000 TV ad-buy in defense of Walker and his budget. While most Americans understand fighting cancer as a "charitable" activity, it is harder to see AFP's political ads as a charitable endeavor deserving of tax-exempt status.

But Koch may also be referring to expenditures we don't yet know about. "If Koch is willing to spend $700,000 on issue ads, there is no telling how much he will spend to directly aid Walker when the recall is scheduled," warns Wisconsin Common Cause Director Jay Heck.

"There Will Be No Stopping Union Power"

While Walker consistently described his efforts to extract concessions from public workers and make it harder for them to organize as a fiscal necessity, refreshingly, Koch abandons this spin. The fight in Wisconsin is about "stopping union power," says Koch.

"What Scott Walker is doing with the public unions in Wisconsin is critically important. He's an impressive guy and he's very courageous," Koch told the Palm Beach Post. "If the unions win the recall, there will be no stopping union power." The reporter adds: "As Koch speaks, he repeatedly uses the phrase 'union power' as though it's interchangeable with the word 'Bolshevik' -- a new red scare for a new century."

David appears to be channeling his dad Fred Koch, a founding member of the John Birch Society, who raved that the National Education Association was a communist group and that public-school books were filled with "communist propaganda." He even suspected President Eisenhower and spoke of the "pro-communist" Supreme Court.

In reality, a substantial portion of Wisconsin union members have had a tendency to vote Republican. Not anymore. "We are not going to let gays, guns and god divide us," said Joe Conway of the Madison Firefighter's Local 311 at a recent rally. Wisconsin police and fire stepped up in support of teachers, nurses and snowplow drivers, even though they were exempt from the Walker collective bargaining bill.

Walker's controversial budget gave $2.3 billion in tax breaks to corporations and the wealthy, while slashing $170 million from local governments and $1.6 billion from schools. Walker was elected on a promise to create 250,000 jobs in the state. Yet according to the most recent data, while the nation added 853,000 jobs over the last six months of 2011, Wisconsin lost 35,600 jobs. No other state lost that many jobs, and the downturn started in July, the month Walker's austerity budget kicked in. 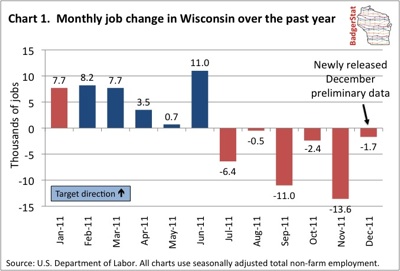 Rather amusingly, the theme of AFP's latest ads is "It's Working!" The ads fail to mention the striking impact the budget has had on tanking state jobs numbers, nor do they mention teacher layoffs, increased class sizes, cutbacks in services or kids being kicked off their health care. Instead, AFP and the right-wing MacIver Institute have tried to convince voters that Walker ended collective bargaining "abuses" and saved the state money without any "mass layoffs."

As Walker travels around the nation giving talks at Koch-funded institutions (the Texas Policy Foundation, Arizona's Goldwater Institute, Florida's James Madison Institute) followed by fundraisers, he complains ceaselessly about the "union ads" being run against him and the efforts of "out of state unions" to unseat him. He follows his speeches with high-dollar fundraisers that have netted $250,000 checks from out of state billionaires like Bob Perry of "swift boat" fame.

In reality, there are no union ads on TV in Wisconsin or any other ads critical of Walker, only pro-Walker ads from AFP and the Walker campaign. Walker has successfully raised $12 million with this gambit and has spent some $7 million on television already, but unions and independent expenditures groups have yet to spend a nickel on television. Given that six Walker aides and associates have been indicted in a wide-ranging being run out of the Milwaukee District Attorney's office, the lack of ads is surprising.

While the rest of the nation is on the uptick, Wisconsin's job loss is forecast to continue.

These predictions arise not from the Bolsheviks or the unions, but from the staid Philadelphia Federal Reserve. Economists there say "there is little prospect that such trends will reverse. Given the Contractionary policies implemented in the budget, this is no surprise."

In his conversation with the fake David Koch over a year ago, Walker said Wisconsin is "ground zero, no doubt about it." For once, Walker was right. Given the impact of his policies, to many observers Walker's recall election will be a bellwether on whether or not Americans will allow policymakers to force them to bear the blame and the brunt of the Wall Street financial crisis or if another view of Wisconsin's future will prevail.