The infusion of $97,000 into the 2012 Obama re-election campaign by a Texas oil executive should not raise any eyebrows in an election cycle where the president has publicly embraced the super PAC concept. US media organizations might not flinch when the same executive happens to be a 2010 Obama appointee to the Advisory Committee for Trade Policy and Negotiations (ACTPN). But since the oil magnate, Kase Lawal, is now implicated by the United Nations in a gold smuggling operation in the Democratic Republic of Congo, it might be time to dust off the neglected Congo desks and get a solid investigative reporter on the story. 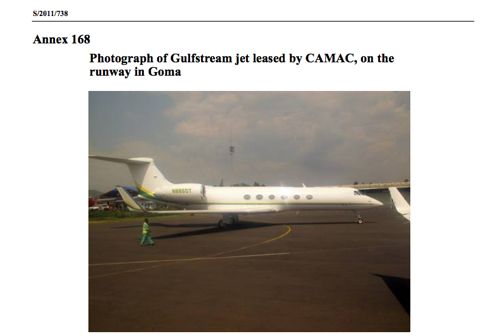 The official White House biography lists Kase Lawal as Chairman and CEO of CAMAC International Corporation, "an integrated oil and gas company." The UN report details a plot in which Lawal's company, CAMAC International, leased a Gulfstream IV jet and sent it to the Congo for a gold smuggling operation. Included are an excerpt from a PowerPoint presentation made at a meeting in New York in December 2010, outlining the proposed gold deal for Lawal and others. If that is not enough, there are detailed cell phone records indicating that Lawal knew that the country of origin for the 475 kg of gold was the DRC. 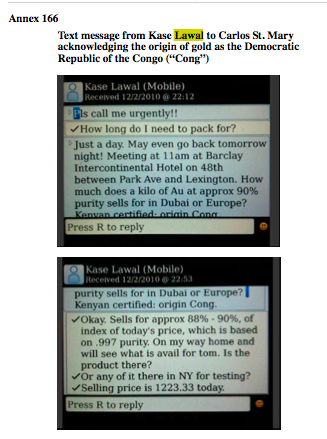 The Group has investigated one particularly high-profile case in which Kase Lawal, Chair of the CAMAC (Cameroon-American) Group, attempted to conduct a gold transaction that subsequently involved (Bosco) Ntaganda between December 2010 and February 2011. CAMAC is an oil company based in Houston, Texas, in the United States, with offices in Lagos and Abuja, Nigeria. Financing this deal with company funds, Lawal organized it in collaboration with Carlos St. Mary, director of the diamond trading company Axiom Trading, and Dikembe Mutombo of Mutombo International Group. 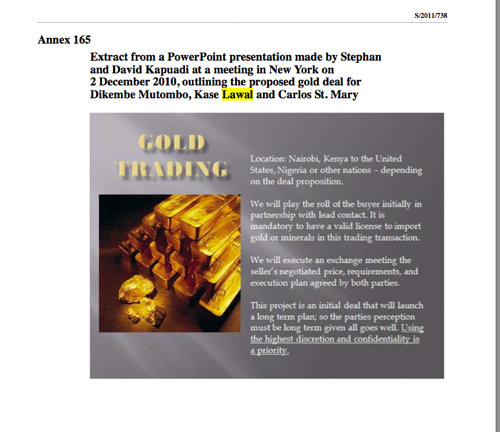 The profit to be gained from the deal was originally estimated at more than $10 million. Lawal agreed to finance the deal, with St. Mary conducting the business in Kenya and the two splitting profits with Mutombo, originally on a 40-30-30 basis, according to the UN report.

Worse, Lawal's group was dealing with Congolese warlord Bosco "The Terminator" Ntaganda, who is wanted by the International Criminal Court (ICC) for war crimes that include the killings, rapes and mutilations of men, women and children, and the forced conscription of child soldiers. In the most notorious case, Ntaganda is accused by Human Rights Watch of commanding troops that massacred 150 civilians at Kiwanja in North Kivu province in November 2008. "He also commanded troops accused of having killed at least 800 civilians on an ethnic basis in the town of Mongbwalu, in Ituri district in 2002, after his troops took control of the rich gold mines in the area," HRW says.

HRW Report on the criminal militias in DRC

There are international sanctions against gold trade in DRC, and the United Nations specifically prohibits the financing of armed groups in DRC. Ntaganda controls the Mungwe and Fungamwaka mines, near Numbi, through the Great Lakes Mining Company.

According to St. Mary and hotel records examined by the Group, Lawal convened a meeting to initiate the gold deal in New York on 2 December 2010. There, Mutombo and three relatives, Reagan Mutombo, Stephan Kapuadi and David Kapuadi proposed the sale of gold held in Nairobi (see annex 165). Text messages obtained by the Group demonstrate Lawal's understanding that the gold was to have originated from the Democratic Republic of the Congo (see annex 166). Throughout the process, Lawal made no inquiries regarding the exact origins of or conditions in which the gold had been extracted and transported from the Democratic Republic of the Congo to Kenya.

What followed was a trail of arrests, betrayal, bribery, lies, counterfeit currency, and clichéd photos of suitcases full of money at the DRC border. It is all in the UN report. Finally, the CAMAC officials under house arrest in Kinshasa were released after being detained for a month in a hotel in Goma.

CAMAC's Kinshasa representative, Marie Elonga, officially paid $3 million in fines, and the three were finally released on 25 March. According to St. Mary, when he had travelled immediately to see Kase Lawal in London, Lawal had told him that he had lost a total of $30 million as a result of the whole ordeal, including transport fees, fines, bribes and the payments made on the gold purchase.

The Guardian reports that all efforts to reach Lawal for comment have failed.

Camac said it had no comment on the allegations, but said: "Camac is a law-abiding company and we disagree with the representations made in the report." The White House did not respond to a request for comment.

Even though CAMAC's lawyers denied any company involvement in the scheme, the UN Group of Experts has photos of the impounded corporate jet and the report says CAMAC acknowledged the release of its corporate jet on its website. CAMAC was in breach of its contract with Southlake Aviation when the Gulfstream was flown to the DRC.

According to the official website, "The President appoints up to 45 ACTPN members for two-year terms. The 1974 Trade Act requires that membership broadly represent key economic sectors affected by trade. The committee considers trade policy issues in the context of the overall national interest."

The United Nations' accusations against Lawal and CAMAC deserve a complete investigation and Congressional hearings might be a good place to begin. It is shameful to think that a United States trade commissioner is responsible for funding a notorious, murderous Congolese warlord. Who vetted Lawal's appointment? The Obama administration has accepted significant tainted campaign donations that should, at the very least, be returned.