Anti-aircraft guns pound a hillside on the edge of Virunga Park in eastern Congo. The blood-red tunic of the woman who is shouting into her cell phone is a stunning contrast to the drab fatigues of the Congolese (FARDC) soldiers and the dusty vegetation at her feet. The woman is a journalist for Al Jazeera and she is speaking with Colonel Vianney Kazarama who is at the receiving end of the antiaircraft fire. Kazarama is the spokesman for the M23 faction of the splintered Congolese army. The fighters defending their positions on the hilltop were once fighting beside the men in the heavily armored tanks. Kazarama's voice crackles over the cell phone speaker as he demands reconciliation with the government in Kinshasa -- a reconciliation that was promised by the March 23, 2009 Amani Leo peace agreement. But peace is elusive in Congo, and millions of innocent civilians are paying the price.

The Al Jazeera video is riveting and provides the first visuals of the renewed conflict in this beautiful region of eastern Congo. Soldiers of the regular Congolese army are lobbing shells into the hills near Rutshuru in an attempt to quell the defection of soldiers once forced under the command of renegade general Bosco (The Terminator) Ntaganda. The newly formed M23 faction that recently split from Ntaganda has been shrouded in mystery, rumor, innuendo and outright propaganda as media influenced by the Communication Ministry of Congo spun the narrative over the past few weeks. M23 has been successfully branded "mutineers." Why?

Give Al AJazeera credit for solid reporting. How did they get the story straight from M23? The reporter simply picked up a cell phone and dialed spokesperson Kazarama to learn more about the reasons behind the rebellion. Radio Okapi knew how to contact the rebels and published M23's press release last week. International media did not. Instead, media offered the Ministry story line of violent "mutineers" in cahoots with the warlord Ntaganda. Kazarama vehemently denies the warlord Ntaganda is leading M23, or that M23 is protecting him. In fact, MP3 accuses Kinshasa of sheltering Ntaganda.

The thirteenth press release from M23 came out yesterday, and the African press is beginning to report the narrative offered by M23. 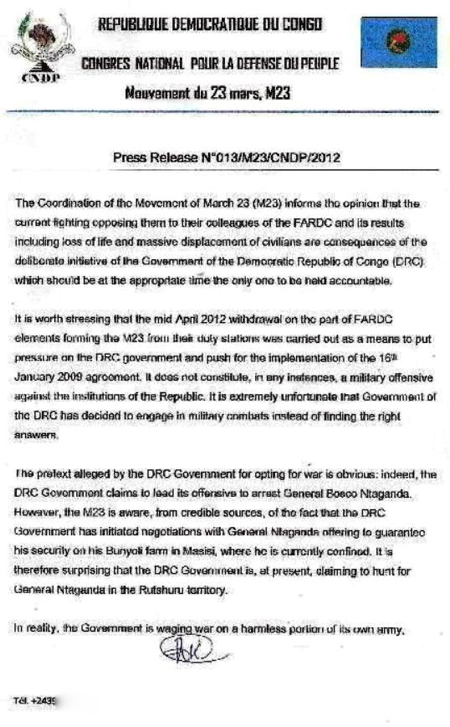 The bottom line political reality is that M23 wants to tell its story, and it is an account that deserves international attention and investigation. All one has to do is ask. We received a copy of their thirteenth press release by email.

It is worth stressing that the mid-April 2012 withdrawal on the part of FARDC elements forming the M23 from their duty stations was carried out as a means to put pressure on the DRC government and push for the implementation of the 16th January 2009 agreement. It does not constitute, in any instances, a military offensive against the institutions of the Republic. It is extremely unfortunate that Government of the DRC has decided to engage in military combats instead of finding the right answers.

The narrative of the last three years is complicated, but here is a short summary. In 2009 General Laurent Nkunda, leader of the rebel National Congress for the Defense of the People (CNDP), was ousted in a bloodless coup perpetrated by Bosco (The Terminator) Ntaganda, who is wanted by the International Criminal Court for war crimes. Ntaganda was paid $250,000 by the governments of Rwanda and Congo to marginalize Nkunda, who now languishes in a no-man's land of detention without criminal charges in Rwanda.

The elevation of Ntaganda to General in the Congolese army coincided with the signing of a peace accord between the Congolese government and the CNDP that promised status as a political party. The agreement, Amani Leo, was never realized beyond signatures on a piece of paper. There are in effect two CNDP organizations; those who remained loyal to former commander Nkunda and those who accepted the military authority of Ntaganda. It is a significant and critical distinction.

Over the past three years, crimes against humanity, smuggling, rapes, murder and collusion with former genocide perpetrators from Rwanda has been the modus operandi of FARDC and Ntaganda. Human rights organizations and the United Nations have reams of white paper on the army criminals.

As international pressure mounted this year to put a stop to Ntaganda, Congolese president Joseph Kabila finally ordered the arrest of Ntaganda in April and suspended the Amani Leo peace accord. Ntaganda had defected after his former commander, Thomas Lubanga, was convicted by the ICC for war crimes.

The suspension of Amani Leo was the impetus for soldiers fed up with Ntaganda and loyal to their former commander, Laurent Nkunda, to renounce both Ntaganda and corrupt elements of FARDC. Meanwhile, according to a report by Human Rights Watch, Ntaganda has forcibly recruited at least 149 boys into his forces since April 19. On May 14 the chief prosecutor of the International Criminal Court, Luis Moreno Ocampo, requested that judges add charges of murder, persecution and sexual slavery to Ntaganda's outstanding warrant.

The formation of the M23 faction under former FARDC/CNDP colonel Sultani Makenga, has led to speculation, rumor and outright lies about collusion with the FDLR genocidaires. The Congolese communication ministry and to some extent the United Nations Mission in Congo (MONUSCO), has fanned flames of rumors spreading like wildfire.

The demands of M23 are straightforward. They say they do not want to fight and realize they stand to lose the war of weaponry. M23 would like to see a return to the Amani Leo accord and would also like the soldiers to be paid and fed. M23 makes it very clear that they are rejecting any and all affiliation, forced or otherwise, with the warlord Ntaganda.

Is the Congolese government of Joseph Kabila using the international press to wage a propaganda war against the new rebel fighters in eastern Congo? This is possible and probable given the amount of disinformation disseminated by the foreign press in recent days. Check these stories by Reuters and the BBC and draw your own conclusions.

In other unproven accusations the Governor of North Kivu province, Julien Paluku, and the Congo's Minister of Communications suggested to the international press that M23 was in an alliance with the FDLR (remnants of the Rwandan genocidaires). Those without an understanding of the history of the war in this region are reporting this accusation as "fact." It is improbable that Tutsi fighters would align themselves with Hutu genocidaires.

M23 responded, but the response has not been widely reported.

The M23 whose political struggle is aimed and first securing the Congolese people against these genocidal forces cannot, in any way, cooperate with them or make peace with them. M23 does not intend to end its struggle before FDLR are properly brought to account for the acts and exactions committed by them against the Congolese civilian population. The Congolese Government is aware of this.

The international press, instead of speculation, may want to contact M23 directly. Their phone number is on the last of the thirteen communiqués M23 has offered to a disinterested press.

You can hear them now.