What would you do if it was the end of the world? How would you prepare for survival? Where would you prefer to be at that very moment in time?

As for me, I'd prefer what author, Emmy Laybourne, choose for her debut novel, Monument 14:

"Anytime that I am in a superstore, I'm thinking about how I can make a house out of it. Maybe it's the structure of the space because they're usually made of concrete blocks and I feel like I'm in a bunker. I start casing the joint for supplies and try to figure out how I can survive there if I got stuck." 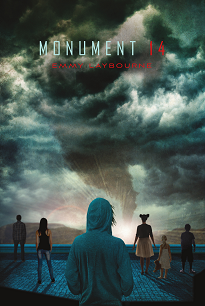 While she was in there doing that, I was in there buying a mop. Laybourne initially came up with the idea as a musical for the stage which was set 50 years in the future at a Walmart where a small colony of people began eeking out their survival. But Laybourne soon scraped that idea and felt the story was more suited to a YA post-apocalyptic novel. She explains:

"I wanted to explore power dynamics between teenage boys. That was really interesting to me, and I thought if you had all these kids together, closed off from the world, they'd have to figure out who was in charge. And, also, the people who are popular and seem like good leaders in school, like Jake Simonsen [a celebrated jock character in the Monument 14], sometimes turn out to not so good when the pressure is on."

A couple of summers ago, while Laybourne was in Colorado, she met a group of Boy Scouts. They talked honestly with her about how they were teased in school for being Boy Scouts, but also how they loved it, especially the camaraderie and leadership. She relates, "They learn all this valuable information, but aren't valued by their peers."

Out of this, Laybourne added another dimension to her story. Monument 14 surrounds Dean, a high school teen, who ends up trapped in a chain superstore with a group of kids, including his younger brother, Alex, when all hell breaks loose in the world -- from natural disasters to chemical warfare. Will Dean and Co. survive the apocalypse? Or will they end up killing each other in a Lord of the Flies type scenario? Dean is not the go-get-em kind of kid. He quietly takes in what is happening around him. As Laybourne says, he's an observer.

"He feels strongly about life and the way thing ought to be. Dean's got a real moral compass, even though he's not always able to do the right thing, he knows what the right thing is."

Alex, on the other hand, is afraid, but he harnesses that fear by figuring out how things work. She goes on to say, "He's a technological genius. If Dean's brain runs on emotion, Alex's runs on mechanic and current."

The fast-paced novel, contains fascinating characters, each one has their own way of trying to make sure their own world, inside the superstore, doesn't self-destruct. As for writing a post-apocalyptic novel, Laybourne says, "People are very worried about the state of the job market, the economy, the environment. I think these dystopian and post-apocalyptic books help writers and readers work through their anxiety about the future."

Monument 14 is about kids who have a real sense of right and wrong and are placed in an impossible situation, and how they find their way to take care of each other. The novel is action-packed, moving from the terrifying hailstorm that plunges the reader right into the thick of things to the chemical weapon which changes people's personalities to the powerful cliffhanger ending.

What Laybourne would like people to take away with them after reading Monument 14 is this:

"I would like them to feel like they've been on a great ride. Then, I'd like them to be haunted by the characters, to be worried about them and to be wondering what happens next."

If Laybourne's name rings a bell, it might for several reasons. She starred alongside Molly Shannon and Will Ferrell in Superstar. She went on to have supporting roles in films such as: Mystery Men, The In-Laws, Nancy Drew and Lucky Numbers. Laybourne was also a series regular on the NBC sitcom, DAG.

Before making her way to Hollywood she began improvising while in college. 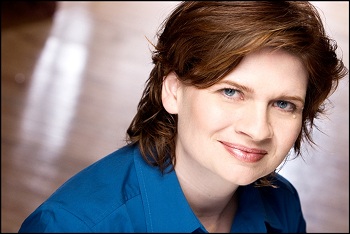 Later, she performed in kids shows with the Freestyle Repertoire Theater in N.Y. Laybourne has always enjoyed making up stories on the fly and credits her training in acting, as well as playwriting and screenwriting for the ability to create fully formed characters, and training to write visually and effectively. Laybourne is also a lyricist and is a member of the prestigious Advanced BMI Workshop, a collection of people writing at the top level for Broadway bound musicals. She has collaborated with different composers and currently working on a YA musical and a musical revue about parenting in the modern age.

Her family is also very supportive. Laybourne drew on the morals and culture of her family when writing Dean and Alex. Dean is also named after her mother. The New York resident is the daughter of Geraldine Laybourne, o-Founder of Oxygen Media and the former president of Nickelodeon, and her father, Kit, is a television and film producer. Her brother, Sam, is a writer and co-producer of Cougar Town.

Probably one of my favorite things I've ever written is a song that I performed with my brother called 'We Can't Make Love Because We're Related.' It was so much fun to perform and work with my brother. Out of all of my dreams, for myself and my career which are many, working with my brother is one of my greatest ambitions.

In her spare time, when she has any, Laybourne enjoys unwinding with a good book, especially YA, but she loves to work. Yet, her ideal afternoon would be spent reading and writing lyrics. Of writing, she says:

"It's feels like a privilege and honor to do something I love so much."

Monument 14 was released on June 5. Pick up a copy and enjoy!