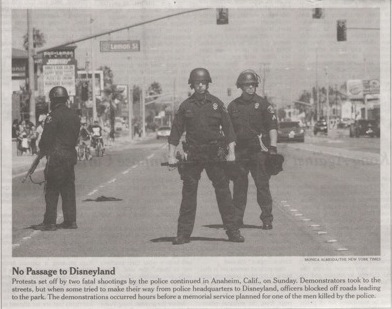 A picture is worth a thousand words is often used as short hand for the power of an image to convey information and elicit emotion. But a snap shot in time can distort reality and mislead, as is the case of the NYT's photo of police in formation in Anaheim with the caption" No Passage to Disneyland."

The real story in Anaheim this weekend was that the protests that were sparked by the Anaheim police killing of two Latino men, Manuel Diaz and Joel Acevedo, was the massive police presence that met a mere 100 to 150 peaceful protestors.

When I arrived at the Anaheim police station I expected to see a police force prepared for a demonstration and possible unruly behavior as tensions had been high all week. Since the shootings, a canine had been unleashed on an unarmed crowd of mostly women and children, and many rounds of non-lethal "rubber bullets" had been fired at the citizens of Anaheim.

Never did I forsee the scene before my eyes. I was shocked and frightened by the show of force.
At about 3pm the demonstrators left the APD and marched toward Disneyland. 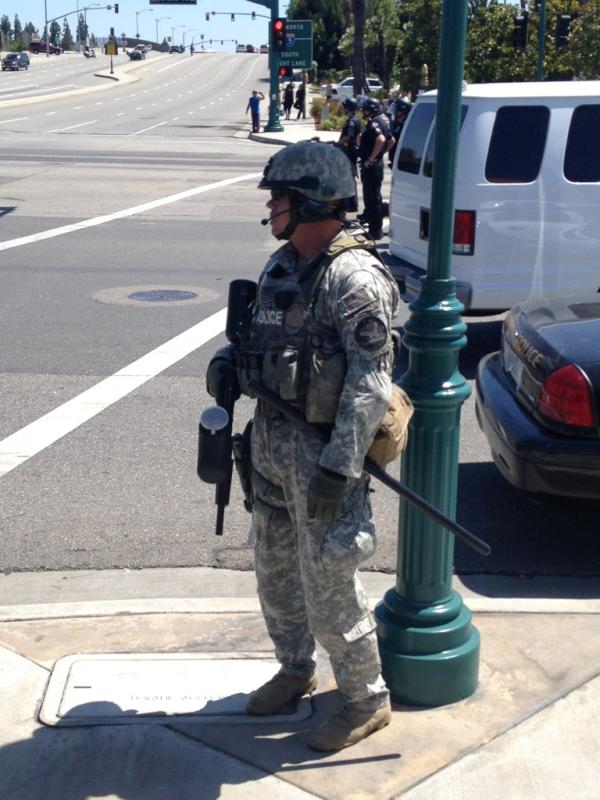 The NYT photo is taken from a particular angle and at a particular point in time and cropped in such a way that it minimizes the degree of police presence at the scene.

Here is the photo taken minutes later (the police are now wearing riot gear) from a slightly different angle and un-cropped to include what the NYT excluded, the "militarized police" in camouflage fatigues, grenade launchers and battle ready. Why would the APD wear camouflage fatigues? In an urban setting the fatigues have the effect of making the wearer stand out rather than blend and bring to mind a battle zone with all the danger and terror that connotes.
The NYT seems to have taken great pains to show us only three policemen because everywhere the eye could see there was a phalanx of said "militarized police." 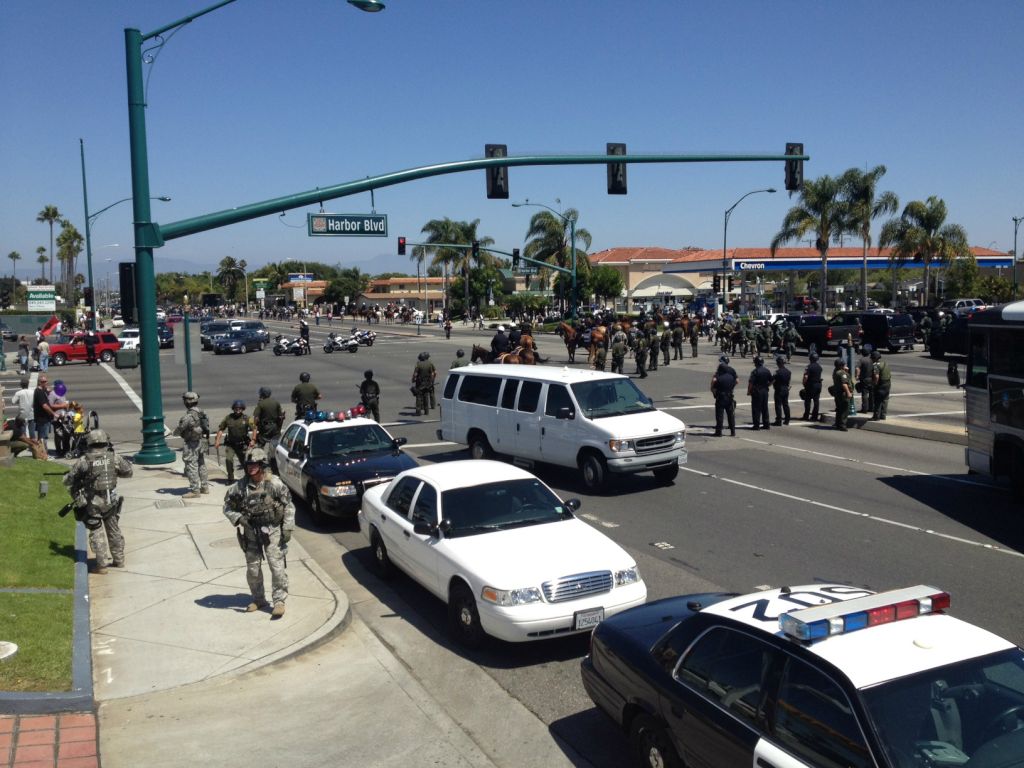 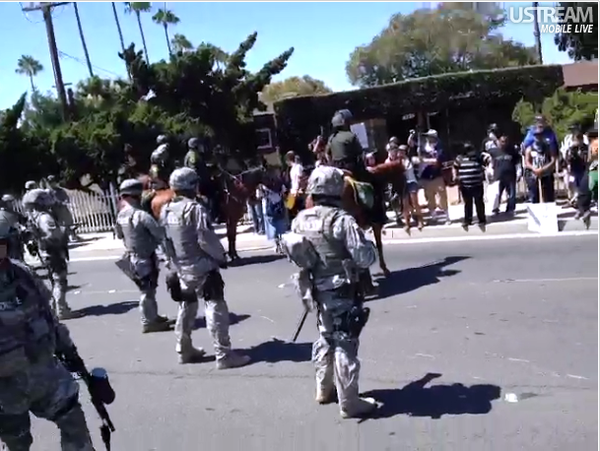 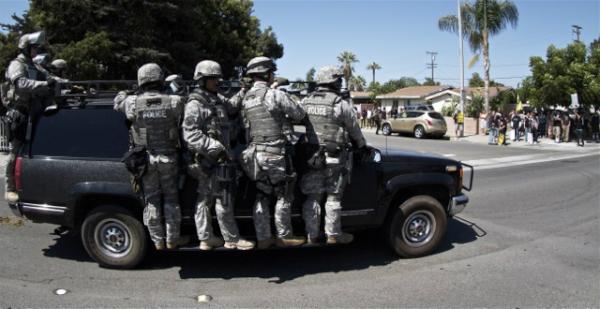 The families and friends of the deceased, as well as a mixture of social justice organizations, political left groups, and OWS ( mostly from Orange County, Los Angeles and Oakland with their team of live- streamers), gathered outside of the Anaheim Police station at noon.

The police presence was astounding. Police in and out of riot gear stood in formation behind a rubber barricade. Snipers were on the roofs of the station and the church across the street, with lethal power weapons pointed at the crowd below.

A cavalry of about 20 large horses soon arrived, adding additional tension to the demonstration. Still the most astounding aspect was the fatigue clad "militarized police" presence.

The police presence was disproportionate to the numbers and demeanor of the demonstrators.

The question is why did the NYT seem to downplay the police presence? Is the MSM under a government prohibition of showing photos of this type of display? Is this like the prohibition against showing the coffins and the dead from our wars? Sadly, an outright prohibition would probably be superfluous as the NYT does such a great job of policing itself. The rest of the news organizations seem to fall into formation, including the left establishment press.

If you are reading this blog, Huffington Post continues to be the exception.

The photos, with the exception of the NYT's, are generously provided by the dedicated streamers, photographers, and activists of OWS and others under Creative Commons.

Sunday afternoon, as the police presence mounted and the arrests began, the demonstrator's chant "The Whole World is Watching" rang loud. Live-streamers, citizen journalists and activists captured, documented and tweeted.

On Monday, the NYT ultimately muted and distorted.