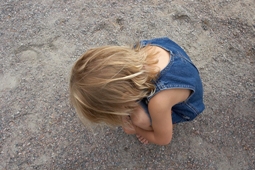 What kind of story do we see in the news just about every day? Incidents of child abuse. When it comes to child abuse, the statistics in the United States are unnerving. According to the Department of Health and Human Services, in the United States a child is abused or neglected every 36 seconds. This Department also reports that in 2010, "parents, acting alone or with another person, were responsible for 79.2 percent of child abuse or neglect fatalities." And according to the American Anthropological Association, three to five children a day are killed by their parents.

At first it might seem ironic that in our child-centered society so much harm comes to children. There are plenty of wonderful parents, but I bet you'd agree that parenthood is not automatically the right choice for everyone. As these statistics illustrate, you don't have to look very far to find parents who never should have had children.

When this happens, it not only harms children, but comes at great cost to our society. Who pays for the costs of unfit parents and their harmed children? We do. In 2007, Prevent Child Abuse America conservatively estimated the annual costs of child abuse and neglect at $103.8 billion.

But there is good news. In our current political climate where bipartisanship seems virtually non-existent, child abuse is an area that stands out as an exception. Recent bipartisan efforts of Senators Susan Collins (R-Maine) and John Kerry (D-Mass.) have resulted in the Protect Our Kids Act, which proposes the development of a national strategy for reducing child abuse.

Kerry indicates that the Act will evaluate effectiveness of existing programs designed to "keep children safe from abuse, maltreatment, and neglect." However, more needs to happen for real change to occur, and it starts with mindset change.

In our society, driving is a privilege because if we aren't able to drive well, it will result in harm to others. Because parenthood can potentially cause great harm to children and society, and because it's arguably the most important job in the world, it's time we get more serious about holding these same attitudes when it comes to having children.

And we need to translate these attitudes to the development of programs, such as nationally mandating high school parenthood education. It exists in some schools, but more often than not it isn't mandatory, and when it does exist, needs to go further than introducing what's involved in parenting. At this age, young people need to begin exploring their interest, desire and aptitudes for parenting one day.

We need to get more serious about adult parenthood education as well. Mandated educational programs do exist, such as the Parent Accountability Act, which is designed to educate parents of teens convicted of gang crimes. Lots of resources are also out there, but they are largely for parents seeking help once the baby is already on the way, is already here, or when problems already exist. It would be far better to invest resources in programs that are taken before pregnancy occurs to help people assess their readiness on a number of levels, from the financial to the emotional. Developed by experts from a range of disciplines, this kind of program should also be mandated, and designed with serious state and federal incentives, such as tax deductions for completion.

No doubt in today's economic climate, some might initially balk at the costs associated with programs like this. However, cost concerns need to be put against the billions we already pay due to bad parenting and the harm it causes to children. Treating parenthood as a privilege would shift the cost responsibility from dealing with the aftermath of unfit parents to preventing them in the first place.

Children deserve parents who are best suited to raise them, and society has a duty to our children to ensure this happens. Creating tangible ways to treat parenthood as a privilege, such as parenthood program directives, has the potential to powerfully execute this duty.

It's time we stop living by pronatalist assumptions that fail to foster a society in which those who are best suited to become parents are the ones who have children, and commit to one that not just promotes, but demands, responsible reproduction for the benefit of all.

Laura is the author of The Baby Matrix: Why Freeing Our Minds From Outmoded Thinking About Parenthood & Reproduction Will Create a Better World.