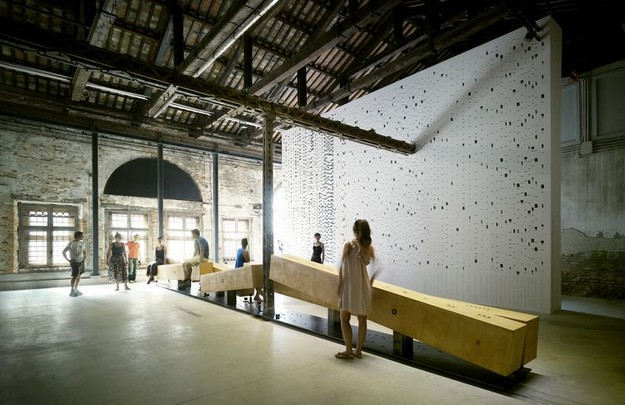 Regular as the tides, another cultural acqua alta is washing over Venice now in the form of the Biennale Architetttura 2012. The theme this time is "Common Ground" and joining the many international firms exploring that theme in this cosmopolitan design petri dish are four from Ireland.

The country's official representative is the Dublin-based heneghan peng (no caps--it's a design thing), a firm already on global design map with such projects as bridge at the London Olympics, Giants Causeway Visitor Center in County Antrim, Northern Ireland and new museum at the Pyramids in Egypt. 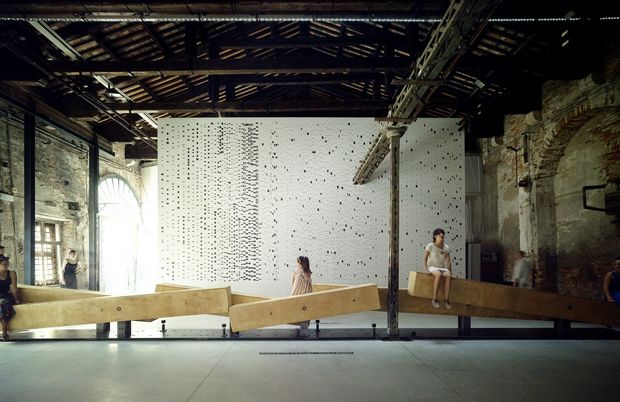 In "Shifting Ground" the firm has created a site-specific sculptural exploration in the languages of architects, with references to materials, balance, numbers, projective geometry, and to the ebb and flow of Venice's tides. It's set in an evocative open space of exposed beams and white-washed bricks in an old ropeworks at the end of the Artiglierie in the Arsenale, an off-kilter, conceptual art see-saw oscillating under the weight of visitors, who invoke the inner child as they climb around the piece trying to find the balance points of its solid Irish Sitka spruce beams. 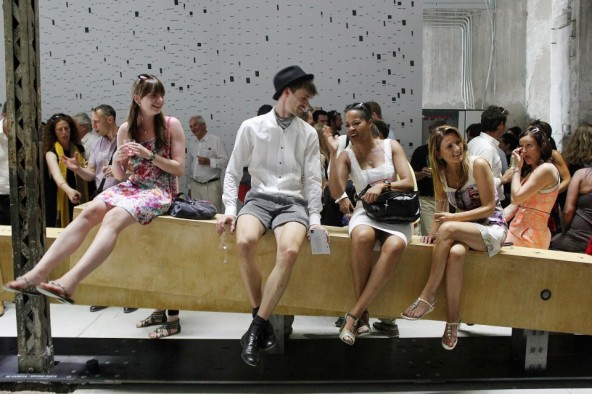 The Irish Times' Frank McDonald called Shifting Grounds "one of the hits of La Biennale because it's so interactive."

And henneghan peng pulled off the miracle of getting Italian artisans to install the piece on one of their most tenaciously guarded holidays, Ferragosto.

Also in the Biennale for Ireland is Grafton Architects and O'Donnell + Tuomey, chosen to participate in the international curator's program. Grafton earned the prestigious Silver Lion Award as "a promising and emerging practice" for its exhibition "Architecture as New Geography," which examines the potential of architecture in the city of Lima, where the firm has won a competition for a new university campus. 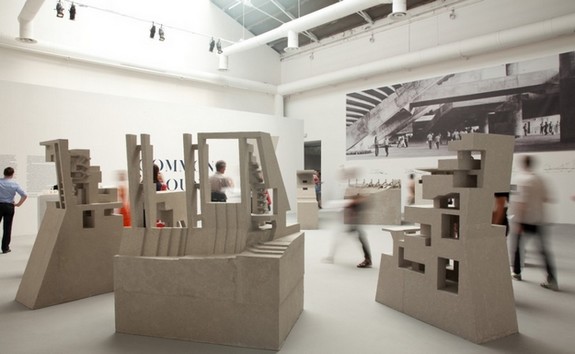 Rounding out the Irish side, was Clancy Moore Architects, included in the Backstage Architecture exhibition focused on the work of 56 architects under the age of 40.

Minister for Arts, Heritage and the Gaeltacht, Jimmy Deenihan said, "Ireland's presentation at the Biennale reflects the strength of Irish architectural talent on the world stage."

The 13th International Architecture Exhibition of the Biennale of Venice Venezia runs until Nov. 25, 2012. After that, "Shifting Ground" is likely to shift over to an appropriate venue in Ireland.

MEDIA PINGS...the 1st Irish Festival in underway in theaters around NYC in a month long celebration of Irish and Irish American playwrights. Event organizer George Heslin has put together a great-looking schedule that includes Hard Times, a musical by Larry Kirwan featuring Stephen Foster songs reworked by the "Black 47" frontman...On Tues., Sept 18 at 6:30 pm, 1st Irish will hold a free event at the Lincoln Center Library for the Performing Arts. Called "Celtic Cross Over," a panel discussion that will explore the intersection of arts and business, an event co-sponsored by the Irish Business Organization of New York...with iconic singer & songwriter Judy Collins is their honoree, Irish American Writers & Artists are expecting a memorable Eugene O'Neill Award Celebration in NYC on Mon., Oct. 15. For more info, go to the IAW&A website.