Could immigration reform expand the scope and cost of President Barack Obama's health care reform law? If advocates for immigrants have their way, it will.

With Obama and congressional leaders eyeing a comprehensive immigration reform package, some lawmakers see an opening to that would enable millions of immigrants, whatever their legal status, to get health care, The Hill reports.

"We have to figure out a way in which [undocumented immigrants] incorporate themselves into the larger workforce, and into our society in general, and not be a burden," said Rep. Luis Gutierrez (D-Ill.), a leader in the immigration debate.

(Due to a quirk of the Supreme Court ruling that upheld the health care law last year, though, some immigrants legally living in the U.S. might actually get a better deal than citizens in states that don't expand Medicaid.)

By limiting immigrants' participation in health care reform, congressional Democrats avoided a fight over immigration in the middle of the battle over Obamacare. They also keep down the price tag for the overhaul by leaving out about 5.7 million undocumented immigrants, according to an estimate from the Urban Institute and the Robert Wood Johnson Foundation.

Opening Obamacare up to undocumented immigrants and easing the restrictions on immigrants legally residing in the U.S. would doubtless be controversial. It would also extend health care coverage to a huge chunk of those who will remain uninsured under the health care reform law.

Undocumented immigrants would make up more than one-quarter of the 22.1 million people projected to remain without health insurance after the big parts of the health care reform law begin to take effect next year, the Urban Institute and the Robert Wood Johnson Foundation project. The other largest groups would be people who are eligible for Medicaid or the Children's Health Insurance Program but don't sign up and people who simply decline to buy health insurance. 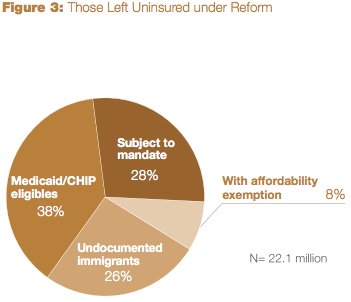 Immigrant advocates like Gutierrez and Grijalva likely face an uphill battle, however: A bipartisan group of senators issued an immigration reform framework Monday that favors the status quo when it comes to restricting immigrants access to federal assistance programs.