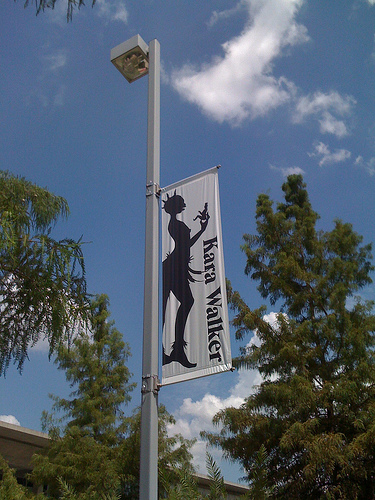 Kara Walker is no stranger to controversy.

On Thursday, March 7, 2013, the African-American visual artist addressed a room of more than 100 people in New Jersey's Newark Public Library to talk about her work and its most recent firestorm.

Walker, perhaps best known for her murals of stark silhouettes depicting often disturbing scenes of racial and sexual violence in black and white, creates work that elicits strong reactions. At the Newark Public Library however, one particular piece in its collection bothered employees to the point of censorship.

The graphite and pastel drawing in question, with the cumbersome but descriptive title "The moral arc of history ideally bends towards justice but just as soon as not curves back around toward barbarism, sadism, and unrestrained chaos," portrays an almost overwhelming amount of images clustered together. Included are hooded KKK figures alongside a burning cross, Obama at a podium giving his speech on race ("I think I put Obama in the picture last but I wanted it to spiral out from him," Walker shared) and African Americans in various states of horror from the Reconstruction and Jim Crow eras, including one where a naked black woman, her back to the viewer, is pressed against a white man, performing fellatio on him.

This final image of sexual violence was the one to bother a couple of library employees. They found it offensive and so it was covered up with a cloth for several weeks until they decided against censoring the image any longer.

In the hour the MacArthur genius grant winner spoke with historian Nell Irvin Painter, Walker was by turns gently funny (even while addressing the perceived lack of humor in her work), incredibly insightful (expounding upon the themes she draws on and the responses to them) and dubiously naïve (in regard to the affordability of her work, some of which has sold for almost $400,000. A remark of "I don't understand the market" was all she offered on that subject).

Walker started off by addressing race, which is a, and perhaps the, predominant subject in her work. She doesn't shy away from the horrors of African-American history, which can lend itself to ire from black audiences, a not uncommon occurrence from other black artists as well.

Walker explained that that she wrestles with drawing any images of figures in terms of representation, let alone black ones.

"I really love to make sweeping historical gestures that are like little illustrations of novels," she said.

She explores black identity in a transition point: between the rural south and urban north, "a psychic location where modern consciousness emerges." Included in the library drawing are iconic situations: riots, dancing, and music, which exemplify states of transition and frenzy.

"It's okay for me to like these things, and address these likes to other black women," she said. "My references are riffs on types of stories or narratives, such as Gone with the Wind, Uncle Tom's Cabin, and the Harlem Renaissance."

Walker's work stems out of her own personal struggles with identity.

"Nobody knows how to be black," Painter rejoined.

Walker said she is "bucking tradition by being an artist," which is "often a struggle for many black artists."

In California, where she grew up, and Atlanta, where she first went to college, black was a thing, she said. "Not just an identity or set of histories but a solid thing," which is something that she tries to unpack in her work. Making silhouettes and rejecting proscribed ways of being and identities is a partial rejection of this as well as "a cloying acceptance."

Walker is keenly aware of the possible implications of her work and asks critical questions of herself in regard to it, such as who is this work speaking to, who is buying it, and even what is this doing to the future of the race? Also, what is the audience's responsibility to the art?

The audience and artist are isolated from each other, she said, and there is this "protracted war and fear." Who gets access to the work and what kind of conversation happens when access is there?

Walker considers what it means to be a black woman here and now versus there and then and consequently addresses the themes of slavery and race. As a child, she would imagine living in different eras, but found the reality of them shaking her out of her reveries, realizing that it would be impossible to survive there.

Even though it may make her a self-proclaimed "daddy's girl," Walker named her father, a fellow artist, as one of her greatest inspirations.

"He made it okay [to be an artist]," she said. "I didn't realize what a treat it was until I got to college. Art just became a way of being, of communicating."

"Someone once told me, 'You have to make the work that you want to see.'" Walker said.

She became interested in silhouettes, which as an art form were "sort of forgotten and small, female and domestic," she described. They were done by "invalids and women," along with "a few itinerant artists."

Walker described her process, saying that, for her art, she carefully selects "black people, women, heroic figures in speeches," elevating it to the level of political arena.

Walker, who called herself "an unreliable narrator in each of these works," raises the question of what the outcome of using these archetypes, such as Obama, is. "Do these archetypes collapse history?" she asked. "They're supposed to expand the conversation, but they often collapse it."

In talking to people about her art, Walker recognizes the overpowering effect it can have.

"There's a too-muchness about it," she described, "a mute quality" that makes her and the viewer more complicit in the goings-on. It maintains anxiety and intensity and leaves it there.

The images come at you all once, unlike a book, Walker elaborated. The viewer doesn't have time to get adjusted to what's happening next, unlike the artist who lives with it for a while through the creation of the art in drafts and different versions. But, in the end, the viewer gets this "assault of stuff. It's the quality that I respond to in art and in our identities."

Some view her art as "severe and humorless," Painter said, but a woman at the Walker Art Center in Minneapolis was surprised by Walker's gentle nature and compared her to Woody Allen. Painter agrees and sees a humor and playfulness to her work.

Walker spent the final 15 minutes taking questions (or simply the occasional glowing comment) from the audience, but it wasn't until the final one that the topic of the Newark Public Library drawing even arose.

A woman referred to the "controversial art which has brought us all here," but was interrupted by Painter before she could finish.

"You know you can just walk across the floor and view the work, right?" Painter asked.

Yes, the woman knew. Yet somehow, even with this query, the controversy in question was barely touched upon, perhaps to give it as little weight as possible and address other, more interesting ideas instead. Still, it's a little ironic to avoid the subject almost entirely considering that Walker is an outspoken advocate of her bold work.

Indeed, in her art, Walker doesn't shy away from both difficult and disturbing imagery as well as unbridled beauty. It is with this juxtaposition that she challenges viewers, making us uncomfortable but also strangely satisfied that such scenes are created in the first place. This "too-muchness" is just enough.