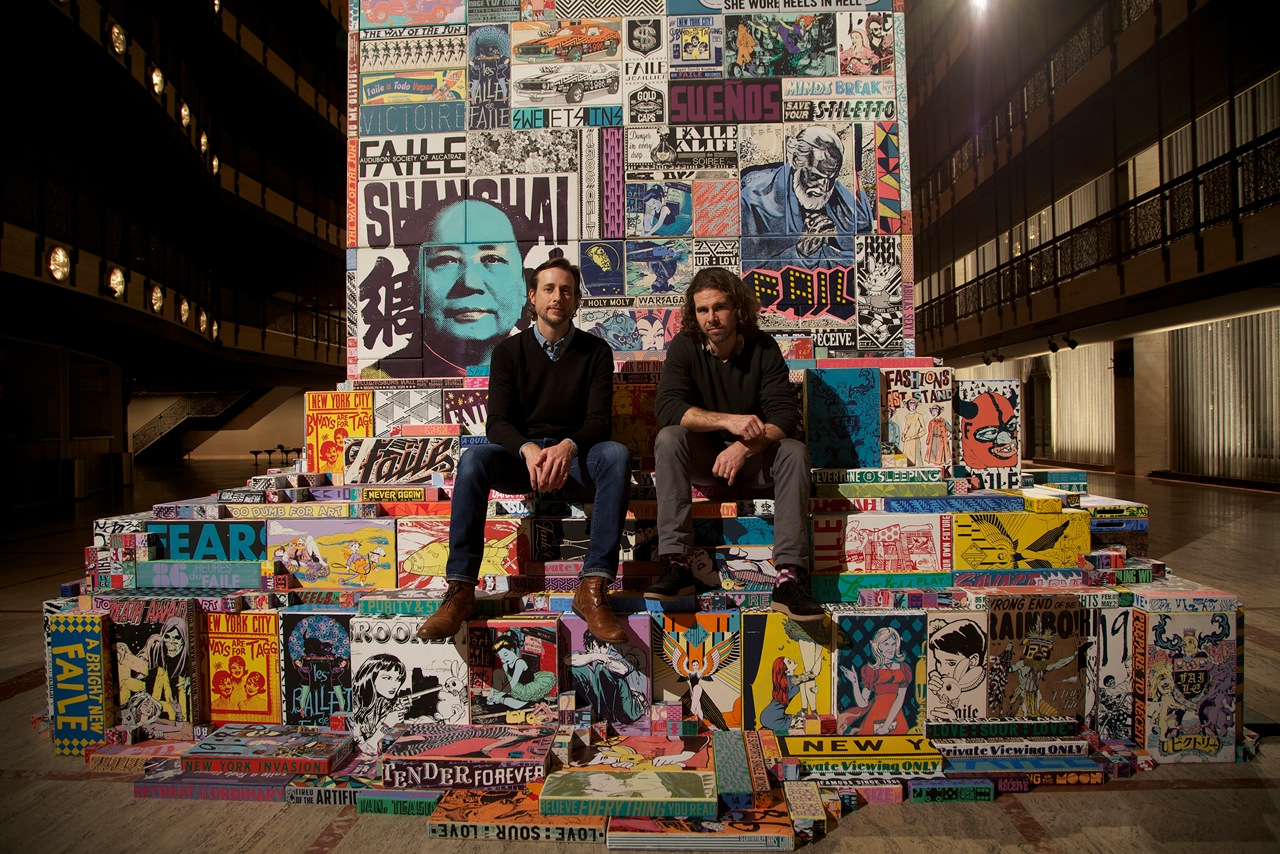 Faile is the name of the collaboration between artists Patrick Miller and Patrick McNeil. The sensibility of Faile is that of guerrilla street art operating outside the mainstream, and while they have become a great deal more part of the conventional art world in recent years, they never thought they would be showing their work at Lincoln Center as part of New York City Ballet's Art Series. Miller, with a wry smile, acknowledged, "It was ironic having (sanctioned) posters up in the subway after working on the streets for so long."

The selection of Faile is something of a masterstroke on NYCB's part. For ballet companies to survive they must foster new audiences and continually establish their relevance as leading art institutions. For its part, Faile is reaching beyond their current comfort zone to embrace something totally new to them. On a recent visit to their Brooklyn studio, Patrick Miller escorted us through their works in progress for their second upcoming Art Series at NYCB's Spring season and explained their thought processes.

As to why they might have been chosen, Miller said:

"I think our having somewhat of a youth following was enticing for them. It introduces ballet to a new audience. I think that was interesting for us too, introducing our work to a new audience. Not only does New York City Ballet have an incredibly rich history but they've worked with artists who were young and contemporary. They have an amazing history of this art series. It kind of went away for a time. I think they had the idea to bring this back and they had a short list of artists. We have a friend who knows us and knew about the situation and what they were thinking of doing and he asked us, hey guys, what do you think? It was originally supposed to be two artists but Peter loved our ideas and what we were presenting and he said, let's go for it. I think it was a great opportunity for us to riff off a new language. Ballet is such a classic art theme. First, just going through the archive and looking through all the old Playbills... we pulled bits and pieces from that and were inspired by it."

"It was cool to see how much Balanchine was experimental and coming at it from a non-traditional way. We feel like our trajectory was also kind of outside of the box and we're slowly becoming more established. That was something we could appreciate about Balanchine."

What they learned about ballet:

"Honestly, the most enjoyable moments have been watching them practice, when they're totally casual and then going to see them in performance. They're so much more real when they're dressed down and practicing. They're not hitting it every time, and you just realize how many hours go into it and I feel like some of those moves... are not the highest percentage moves. They're not going to hit it every time. When you see a performance where everyone's on, synced up, landing everything, it is a really amazing moment. I think that was something I didn't understand from the outside. A lot of those dramatic sequences are like that. I don't think people appreciate how hard it is."

In an effort to explain how they build up their images, Miller opened a medium-sized wooden box for us, telling us about how a long time ago, he and his partner, McNeil, were inspired by Chinese puzzle boxes. He revealed to us the box full of cubes, painted on all sides, which portray separate images. Miller told us:

"Fragmenting those images by turning some to different sides, ideas explode as the differing images begin to relate to each other in random, unexpected ways. We really liked the interaction of play and we made these small puzzle boxes and through that process we were seeing how they could start to abstract. When things got turned and flipped it started to become a beautiful way of the image changing, and the narrative and the color."

It was evident from Miller's engagement with the box that the element of play and serendipity is important to their way of making art. On the event night of their first show with NYCB the artists gave one cube to each seat holder representing a grand, overall image. The element of play inherent in this was evidenced by the fact that on the spot people started swapping their cubes, and now they are even trading them on eBay.

The FAILE Wheels that will fill the Promenade during this spring season will create a different kind of energy than the Tower of Faile did. As a central figure, the tower lent itself to a lot of picture taking and had everyone circling it, looking up. Miller explained the reasoning behind the Faile wheels:

"Tibetan prayer wheels were really inspiring for us. It's something that's been in our work for a while and we thought that for the second round, there was something great about the interactivity and the motion of them. It will create a lot of movement and there's something beautiful about that."

The FAILE Wheels, which are carved in relief and painted, will be set up in three rows of seven and people will be encouraged to walk among them, touch them, spin them... play with them.

About their experience with NYCB, Miller said:

"They're happy and we're happy. It brought in a really young audience which I think was good. One of the coolest things, I think, from going to several of the ballets and seeing that it's usually an older crowd, was that it (Les Ballets de Faile) brought a much younger crowd. Standing up on the Promenade after, everyone was talking about the ballet. They either loved it or they hated it. One of those pieces, I forget the name (Balanchine's Variations Pour une Porte et un Soupir) but it had this crazy dress and this creaking noise score to it. It was really polarizing. It was great from the standpoint of having dialogue, and having passionate dialogue about the ballet. I feel like that used to happen a lot more there."

Miller and McNeil have enjoyed the experience and would love to do more: "We've made it very clear to them. We wanted to be on stage from the beginning. We really wanted to do sets," he said with regret, but that was not possible. "For that to happen I think we really need to be working on a new ballet. Unless you're starting with the choreographer and the music from the beginning, I think it's really hard to interject into that. It would be so amazing. I feel like, if anything, other artists that continue the Art Series down the road might have a better chance to do that just because we really tried to impress how important we thought it would be to bring it on stage. For us it worked well because we were able to be inspired by their archive and in our process that works really well." That's because Faile's work uses found, existing images; other artists' work would, of necessity, have to begin from scratch.

If there was any risk in bringing Faile in for this project, New York City Ballet seems not to be concerned about it. However, this wouldn't be new art if at least someone didn't like it. Miller related that they were warned from the beginning that a certain someone was not going to be pleased. Miller related, "Everyone, from two weeks into this, said, just know that there's this New York Times critic and he will hate this. It was kind of amazing their foresight. We didn't take it too personally." When we mentioned Alastair Macaulay's name, Miller smiled, "Yeah, that guy, I think he was the one person who didn't get it. But that was fine." Fortunately the success of this Art Series initiative doesn't require the approval of old guard, revanchist critics because it is intended to go straight to the people and get them engaged. We are reminded of the journalist, Louis Vauxcelles, who coined the term "les fauves" to describe the work of Matisse and his circle at the Paris Salon of 1905. Wild beasts, he declared them to be, but it's telling that in our time no one other than art historians know the name Vauxcelles.

Faille's sensibility is playful and far-reaching and particularly suited for the marriage of "established" art to "outsider" art. Their use of a broad range of images, some ubiquitous and some original, pop images, pulp art images, juxtaposed serendipitously, place the viewer in a unique cognitive environment. The variety of images could be overwhelming if the attitude weren't so playful but, as it is, the viewer is able to absorb an enormous amount of information and make sense of it by connecting known images in unknown ways, forging new understandings of what we thought we knew in different, enlightening ways. Combining this process, already pregnant, with classical forms like ballet opens new thought-ways to the public that can only benefit everyone.

The special Art Series performance on May 29th is sold out but Les Ballets de Faile exhibit is on display during all NYCB performances at the David Koch Theater with special viewing hours free and open to the public, from June 6-9: 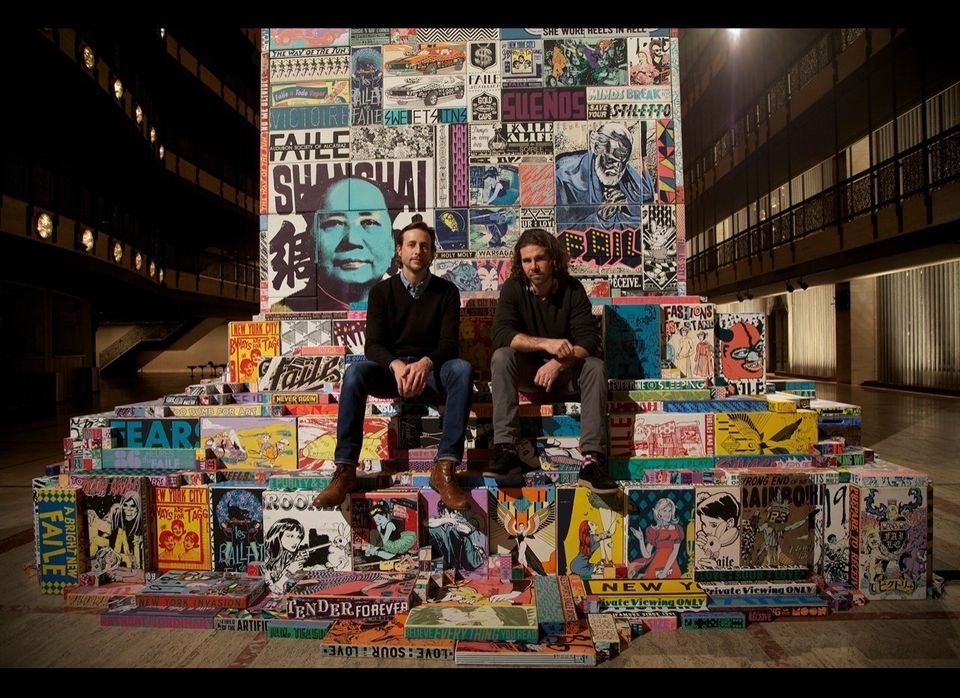