That not withstanding, everything else Jewish seems to have become decidedly kosher in the Polish Republic. Seven decades after more than 90 percent of Poland's Jewish population of 3.6 million was slaughtered by the Nazis (with an occasional assist from a few local anti-Semites) everything from Jewish history to Jewish food to Jewish music to Jewish art has suddenly become Poland's in-thing.

The capital city of Warsaw itself recently feted the opening of an amazingly lavish Museum of the History of Polish Jews. Located at the edge of where the infamous Warsaw Ghetto once stood, it tells the rich tale of more than a thousand years of Polish-Jewish life -- a subject generally and pointedly ignored in the post-war years, both by Communists and non-Communists. .

These days Polish restaurants from Gdansk to Lodz offer their customers Jewish style dishes from "Yiddish fish"" (AKA gefilte fish" to "Sabbath Stew" (AKA cholent). Theaters and clubs headline concerts of klezmer music, art galleries feature exhibits by pre-war Jewish painters and young Poles who've discovered they had a grandfather or an aunt with a touch of Jewish ancestry don't hide the facts as they used to, they rush to forge their own ties with renewing Jewish communities. 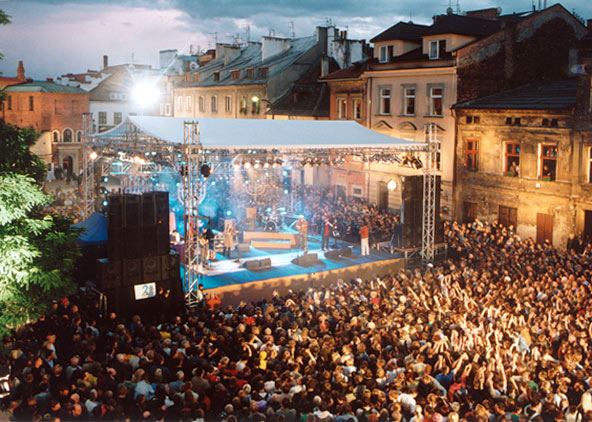 Still nowhere is Poland's new Jewish chic as high-spirited and accomplished as it is in the great southern Polish city of Krakow -- home of an annual Jewish Culture Festival just completing its 23rd successful year .

All but a handful of Krakow's important Jewish community died in nearby Auschwitz (remember "Schindler's List"?) or was simply murdered on its doorsteps by German troops. But miraculously Kazimierz, the city's centuries old Jewish quarter, like most of Krakow, physically survived.

And it is there, along its intertwined, cobble-stoned streets that musicians, dancers, actors and artists from around the world gather each summer to celebrate the richness of global Jewish culture.

This year's festivities included everything from an opening night Melaveh Malka -- a joyful farewell to the Sabbath in one of Krakow's beautifully restored synagogues featuring golden voiced cantors from three continents. The same Tempel was also the setting for an audience packed concert of the Krakow Academy of Music's Big Band led by New York's Frank London, the trumpeter wizard of what London himself calls "the new Jewish music, a fascinating fusion of contemporary klezmer and modern jazz". It also featured another New York Jewish jazz whiz: guitarist Yoshie Fruchter. 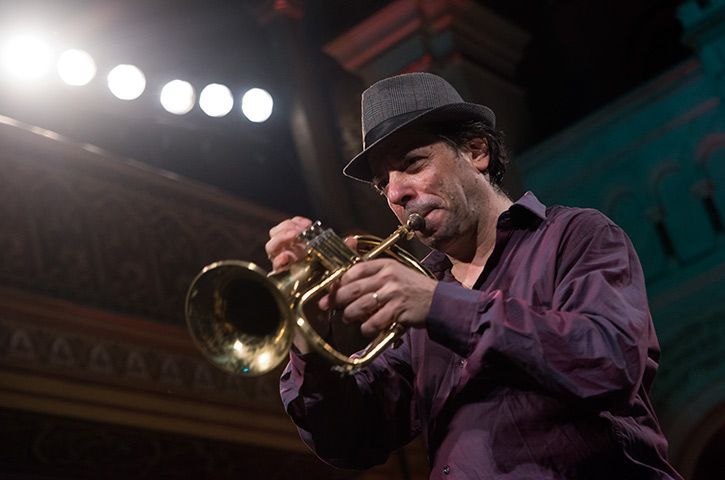 There were dozens of daily workshops on arts and crafts, symposiums on Yiddish song and dance, lectures on Krakow history, and tens of concerts including one by Diwan Saz, a unique Jewish-Muslim group from Israel. There was even a hyper active session by Australian Rabbi Dovid Tsap who personally illustrated his specialized Ollies, Kickflips and other talents as a "spiritual skateboarder."

But as always, the festival's highlight was on one of its final nights when a crowd of thousands -- most seemingly Polish and non-Jewish -- gathered in Szeroka Square before the Old Synagogue. There they fervently listened and clapped as Klezmer music played, there they held hands and danced together in joy.

P.S. Krakow's Jewish Culture Festival also affords visitors an opportunity to taste some excellent cuisine -- not all of it strictly Kosher. Try Szara, where Chef Maciej Dziura offers an incredible oven baked leg of goose glazed with honey and lime. For simpler but no less delicious fare, try the OmOm a recently opened Polish sausage grill on Dajwor Street, just across from the Galicia Jewish Museum.