What happens when an educational game designer has young kids?

I'm at an educational conference in Wisconsin taking a break to write an article about the importance of early childhood education. Just as I'm about to start writing I get a call from my 4-year-old son.

"Daddy, this game you made is really hard! I've been trying to solve it for three days. I tried everything."

He's trying to get through KickBox, a multi-step thinking game I released for the iPad a while back.

"Isn't it cool when it's hard to figure something out?" I ask him.

"Yes Daddy, it's cool, but I need two more lasers. Or maybe a laser that can shoot in two directions at the same time. That would also work."

I assured him that it's possible to solve the puzzles using only the lasers he already has in the game. I can hear him breathing into his mom's cell phone as he ponders how it could even be possible. Then he says, "Okay Daddy, I'll try to figure it out before you get back, but come home soon!"

I've been an educational game designer for 18 years. I develop a system of computer math games called ST Math which is currently in use by over half a million U.S. students. I've worked with hundreds of elementary school kids one-on-one doing research into how to foster persistence in problem solving and build a deep mathematical understanding through challenging games. However, it wasn't until I had my own children that I ever realized that a sizable capacity for mathematical problem solving starts way before elementary school.

Six years ago, Professor Greg Duncan at UC Irvine published a seminal research paper showing that pre-kindergarten mathematical knowledge is the highest predictor of later academic success. And math isn't just slightly more correlated, it far outweighs early language skills, socio-emotional skills and everything else they were able to measure. And yet most pre-k programs I've seen still put a disproportionate emphasis on language.

In Professor Duncan's study, even the "high" levels of early mathematical knowledge were still basic, one-step math skills. Just imagine, if a basic understanding of numbers in preschool has strong effects on later academic achievement, what would happen if we fostered multi-step problem solving abilities at this age? If we could build rich cognitive frameworks for mathematical thinking, problem solving and reasoning at the preschool stage - which I see from my son is not just possible, but readily attainable - we would see a positive effect across all subjects as the students progressed through school.

In the wake of Duncan's study, and with support from the Orange County Children & Families Commission, I began developing and piloting a pre-k version of the ST Math program in 2009. It turns out that computer-based games are ideal for this age group. Computer games for preschoolers can be:

• Language-free. Computer-based puzzles allow us to introduce math concepts like number lines and patterns visually, without relying on language, which can be a barrier for young children.

• Game-based. People learn best through experiences, and for preschoolers that means play. Children can "play" their way through math games while learning math concepts.

• Based on intrinsic motivation. Because they're playing games, and the reward is discovering the right answer and mastering a new concept rather than earning points, children are intrinsically motivated to learn new skills.

• Highly scalable. The wonderful manipulatives that teachers use make early math concepts come alive (e.g., blocks to teach quantity, colored beads to teach patterns, or paper cutouts to show shapes) can be inconsistent from classroom to classroom. With a computer-based pre-k program, all students can have access to the same set of virtual manipulatives.

• Tactile. As any parent who's ever handed their child their smart phone can attest, kids love playing with highly interactive touch technology. So when they have access to visual math puzzles on the tablet or computer, kids quickly learn to love getting their hands on the math. In one of our pilot classrooms, the teacher said that the math work station became more popular than the "house" play area once they introduced interactive math games on the computer.

All of these aspects added up to positive early results of using computer-based ST Math in preschool classes. For example, the number of preschoolers who were able to match one-to-one correspondence (a skill so fundamental that most of us don't even realize we had to learn it at some point) increased by 20%. 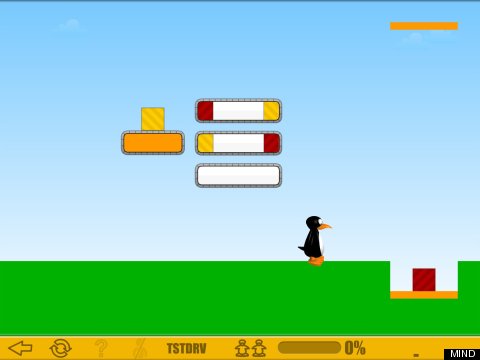 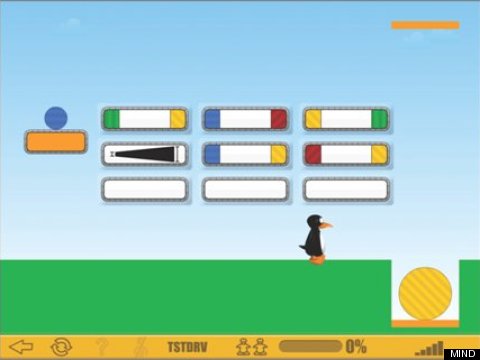 In the Attribute Transform game (above) students identify the shape, size and color of two objects, then select the transformations necessary to make the first object match the second. As children progress through levels, they are challenged with multi-step transformations.

In addition to the tremendous individual academic benefits of pre-k education, research shows that there are long-term societal benefits of pre-k education such as higher income, reduced welfare dependency, and fewer arrests. In fact, economist Timothy Bartik predicted that every dollar spent on pre-k would yield $3 to $4 in returns, based in increased earning potential of adults.

With so much evidence pointing to the importance of early childhood education, I'm pleased that it's increasingly on the national agenda for business leaders concerned about their future workforce's global competitiveness. This summer, executives working with ReadyNation, the US Chamber of Commerce Foundation and the CME Group Foundation in Chicago are all holding events to talk about early learning. The question I ponder is, will today's leaders heed the research and realize that our best hope for improving educational outcomes may be a rigorous focus on early math abilities? Or will they continue the longstanding focus on literacy?

When I get home from the conference, my son is excited to show me that he's problem-solved his way to the next level of Kickbox. It was just a game to him, but I know he used multi-step spatial reasoning, geometry and, of course, persistence. My hope is that more and more 4-year-olds, benefitting from the commitment of today's education leaders and business investors, will spend more time developing these skills early on. Their future, and ours, depends on it.