Recently, Tang Hui was awarded compensation for the week she spent in a labor camp in 2012, a result that the New York Times hailed as a "public blow to China's labor-camp system." For three major reasons, however, the Tang Hui case itself cannot be the considerable contribution to justice and rule of law in China that many would like it to be. This post, which argues that the media has been ascribing far too much importance to the court's decision, is the first in a series of three that explores why.

First, a recap of the case:

In the fall of last year, Tang Hui, the mother of an 11-year-old girl who had apparently been kidnapped, raped, and sold into prostitution by seven men, was sentenced to 18 months in China's re-education through labor system. Her crime was her outspoken advocacy for death sentences for the seven men. Though she was released after only a week, her case received tremendous attention online and in the media, where she became known as the "petitioning mama (上访妈妈)." This publicity has resulted in rising support for reform of re-education through labor, culminating in a government statement in January 2013 implying that the system would be phased out by the end of the year.

The re-education through labor system, known in Chinese as laojiao (劳教), is a type of administrative detention that allows China's police to sentence an individual to three years (with a possible fourth year extension) without a trial or judicial confirmation. If the publicity Tang's case has generated really produces reform (and there is already evidence that it has), this is an extremely important step toward justice in the world's most populous nation.

Yet, the court's decisions to find for Tang Hui cannot really be a "blow to China's labor-camp system" because court rulings in China are not the impactful precedent-setting events that they are in the US. In part, this is because like most of the world, it is a civil law country. At best, it has a soft precedential system where judges in a future case may be influenced by previous decisions, but are not necessarily obliged to rule in the same way. Because any one court case can only have a limited impact, China will probably never have a case nearly as important as Marbury v. Madison or Brown v. Board of Education. 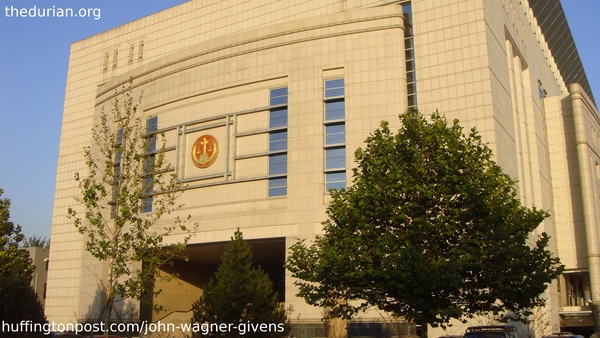 China's courts are not a powerful as their buildings might suggest (Photo: John Wagner Givens)

Overselling the results of a single Chinese court case has happened before. In 2001, a case in which a Chinese court "recognized the constitutional right of a PRC citizen to education, name, identity and reputation" was hailed as a possible "beginning of the era of the rule of the constitution." The New York Times thought that a judge in Hunan in 2003 was "making history" when she issued a decision overturning a local law. Yet, the former ruling was abolished by the Supreme People's Court in 2008, and the judge from the later ended up suspended and overruled. Despite a great deal of excitement from experts, these cases have had little if any impact on the Chinese legal system and thereby show the danger of ascribing very much importance to any individual Chinese court case.

Of course, a high-profile case can lead to new legislation or new rules being issued by the Supreme People's Court, but this will be the result from subsequent administrative or political decisions, not the court's ruling. Indeed, probably the most influential human rights "case" in China was not a court battle at all, but a media and letter-writing campaign against the institution of custody and repatriation, which was prompted by the death of a young man in police custody.

Similarly, Tang Hui has made a significant contribution by focusing sufficient public attention on re-education through labor to prompt political reform to the system. Her victory in court, however, will have little impact, so abundant media attention on the actual court decision seems misplaced. Additionally, my next post will show that Tang's victory in court is not nearly as unique as one might think, or as the New York Times has suggested.