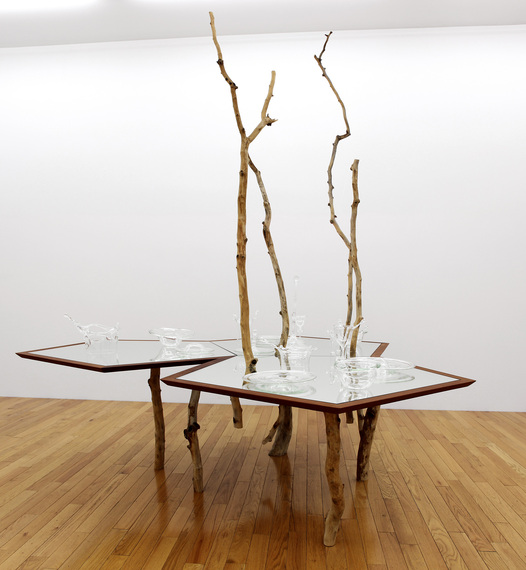 David Shaw's exhibition, Eat Out, at Feature Inc. in New York captures the ineffable qualities of water, with spatial references to above and below. The works reinforce allegorical dimensions of map-making in relation to watery forces. Shaw's handblown glass entities present a range of domestic looking cups, wineglasses, plates and saucers, many of which have distorted shapes that mimic transitory water droplets being thrust outward. The transparent glass sculptures visually behave as water succumbing to natural forces, such as intense winds, but also hint at the unnatural, as if gravitating to a mysterious pull. Shaw executes control over his materials, which appear as water but behave as glass. Sympathetic magic is in play, as glass imitates water and stripped tree limbs imitate lightening.

Semi-permanent, intriguing and bizarre, Shaw's inviting mirror tables are void of proverbial fairy fruit or drink (as G.K. Chesterton writes, "If I have drunk of the fairies' drink it is but just I should drink by the fairies' rules"). Yet, sustenance resounds: the elemental stuff of the natural world, if not supernatural, is present, both nourishing and menacing. The mirrored table surfaces also reflect a prismatic and unfolding wall piece, titled Cloud, created by holographic laminate. Shaw's exhibition is ritually engaged with nature and water in its many states, while also evoking distance, contemplation and the playful artifice of control and enchantment. 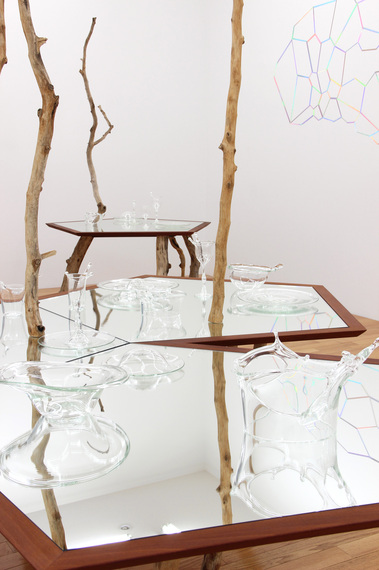 
In Feature Inc.'s front room, Jesse Bransford's wall and floor piece Aqua/Sal for David Shaw employs an amalgam of magical techniques to counteract destructive aspects of Shaw's self-described "water problems," melding the mystical with personal will. The talismanic floor piece includes Shaw's hand-print adjacent to a crystal bowl of salt-water. Eventually the sun will lead to the water's evaporation, leaving behind salt crystals, aiming to evoke mitigation and restore balance. Bransford's vividly painted wall symbols resonate with reverence for the elemental, in both its ancient and present forms. 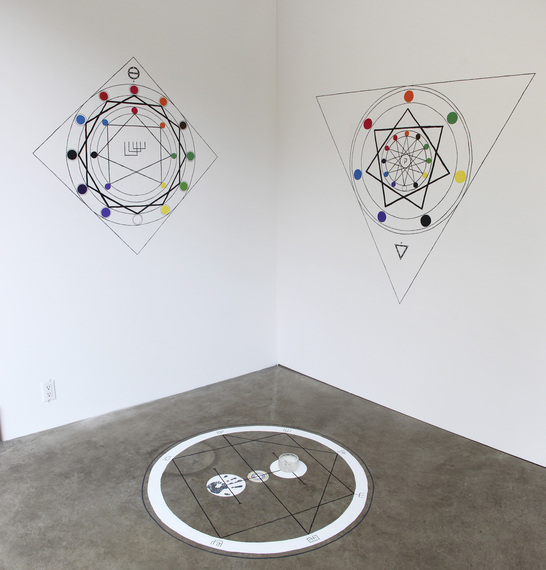