In 1998 I was buying something at an online store so I wrote to ask a few questions. This was before the web became what it is today, when online web stores had personality. The letter that I received back was amazing. Stephen Trujillo sent me a striking account of war and told me that my paintings (which he looked up on the web) evoked "perilous and fragile extremes of life and death". We have been friends ever since. 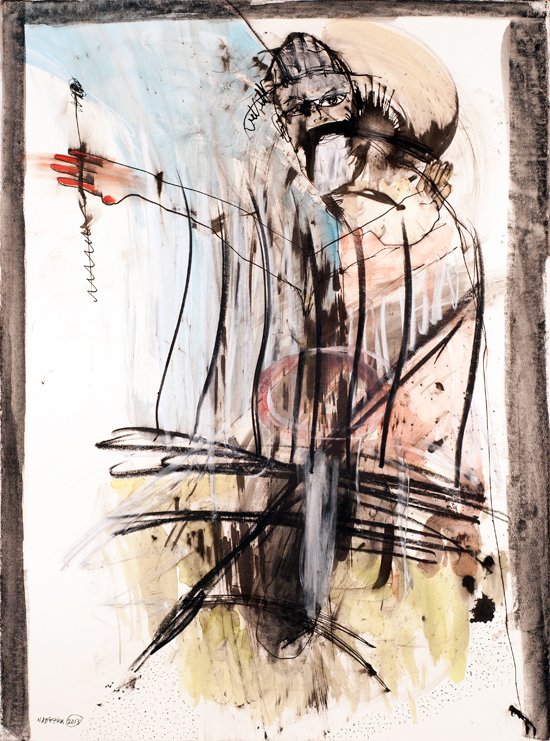 The jumpmaster hangs out the hatch in the slipstream, a hand on each side of the open door, checking the outside of the aircraft. I retch, choking down bile. We are late, jumping well after dawn on October 25, 1983, in an invasion that will be known as Urgent Fury. I am a 23 year-old Army Ranger, aging quickly. I volunteered to be here.

In 2004 Trujillo wrote about his combat experiences in the form of a book. This book is more than reportage, it is more than facts, more than history, it is a work of art, and to my mind it is mythic. The things that he experienced and relates are beyond the historical battles of Urgent Fury, the invasion of Grenada. They are universal, and they depict men experiencing war, which is a fundamental activity of our species. 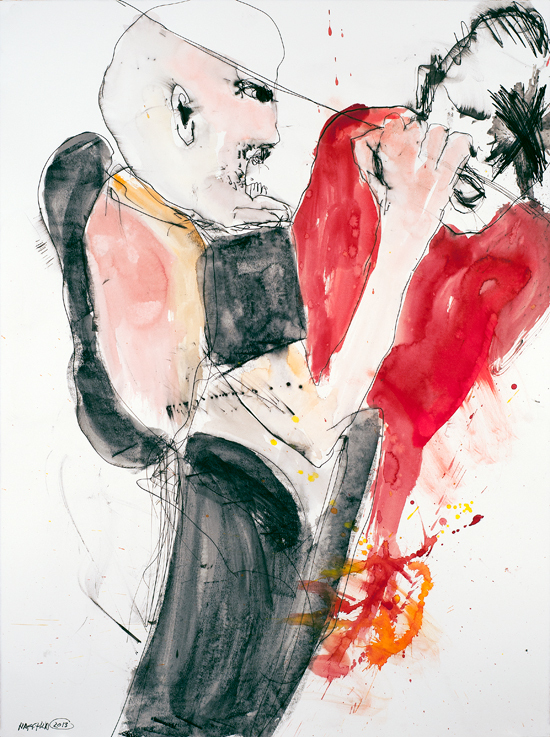 Earlier, a Soviet diplomat stood trembling in our gunsights while we searched him and his car. He drove alone to Point Salines to deliver an official message from his government to the senior American commander. He looked like he expected to be nailed to a wall and shot. We must have seemed like cutthroats to him, bloodied American Rangers with black faces. He was stunned when we finished our search, handed back his watch and credentials, and led him away to deliver his message. He was treated firmly, but with formality. Courtesy did not come easily.

Urgent Fury is history. What gets me in my friend's book is not any historical significance that it may have, because for everyone that was not there it is water under the bridge. The way that Trujillo tells it is relevant to all human experience of war. Few care about Auschwitz, Korea, Vietnam, Iraq or Afghanistan or what is going on in Syria unless they were there. Current news fade fast and old news become history. 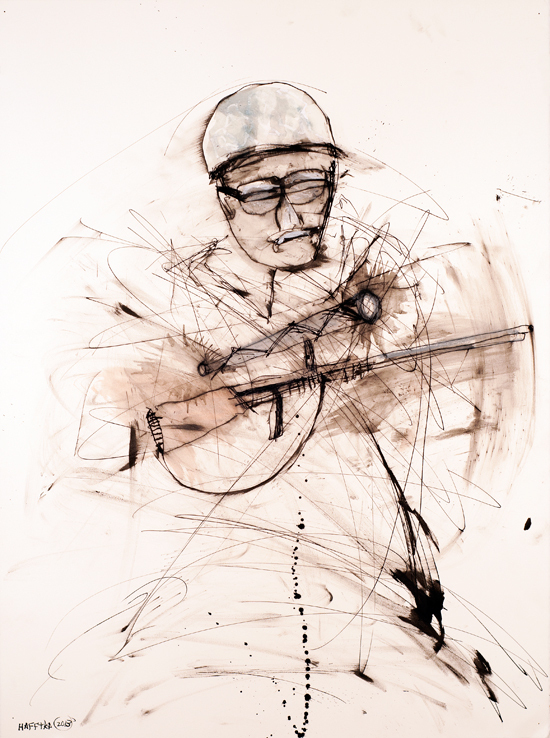 Then we run for our lives, run for the sanctuary of the sea wall, sheltering there shaking from the nearness of death. Scott, Andy and the others drop their rucksacks and look for targets. Slater is laughing again. We see no enemy. I notice in a slow-motion dream-state the beauty of the beach, quaint hotels with curtains over their windows, glass shattering with machine-gun bursts fired by the helicopter door-gunners. I am numb, on automatic pilot, and function despite my fear.

The facts of war, the experiences, are imaginable to many with the help of reporting and photos, but art can express what cannot be documented; felt things, secret things, things that are so true that they shake the souls of men. Trujillo wrote me recently and said:

I want something wicked, something that depicts what you portray like no one else: the coexistence of the hidden, the superficial, and the surface, the beautiful and the ugly, the sacred and the evil, the ritualistic and the deep esoterica. No one shreds the veil better than you. Some depths can only be depicted visually, and not with words. I want my war book to have the most disturbing and honest illustrations never imagined. I want to create an homunculus that The Muse can perfuse to communicate with those that have eyes to see and ears to hear. 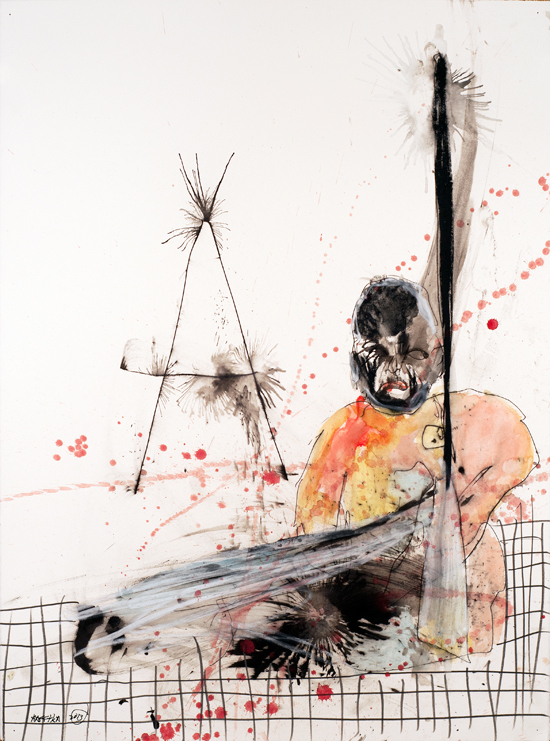 A Spectre gunship taxis onto the runway, lizard-green and fatal, and a gunner pops the top hatch and holds aloft an American flag. It unfurls and everyone cheers, even Scott, but not me. I sit and I wonder what happened during the last half-hour of my life. The 2nd Ranger Battalion still has not lost anybody to enemy action, but a handful, Kevin Lannon among them, are listed as missing. I am wary of my adrenalin rush. I do not know that I will one day grow to love it. I am alive.

I was game. Every veteran of combat will recognize the authenticity of our collaboration. 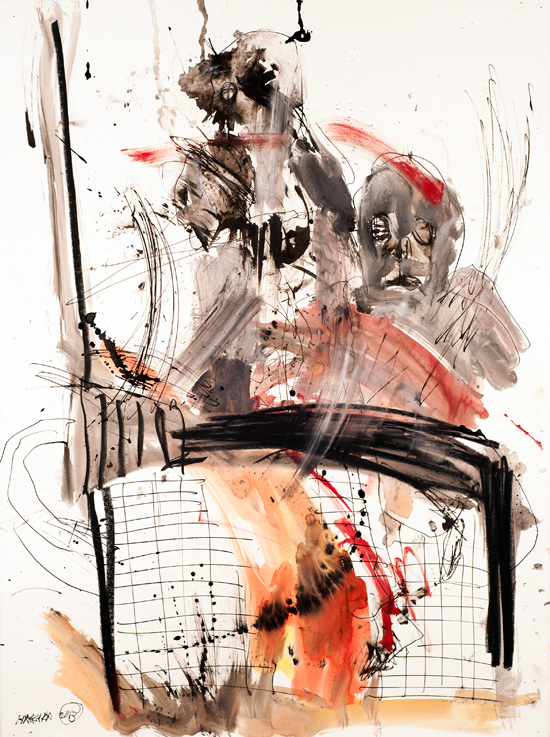 ...the chopper pilots put us down hundreds of meters away from our blocking position, and we are up, running in the sand, sweating under our gear, hearing the whump of mortar rounds, feeling the air change with their detonation. We turn up a side street, a quaint neighborhood around the corner from the police station, equipment rattling, my heart like stone in my chest. We hit the asphalt when bullets zip past, I am on my belly in the fresh sewage of a drainage ditch, loving it because concrete stops bullets.

This collaboration will be the subject of a site specific installation show and performance at The Inn gallery in Pittsburgh, curated by Sarah Humphrey, founder and director, with help from Nikkia Hall, assistant curator. 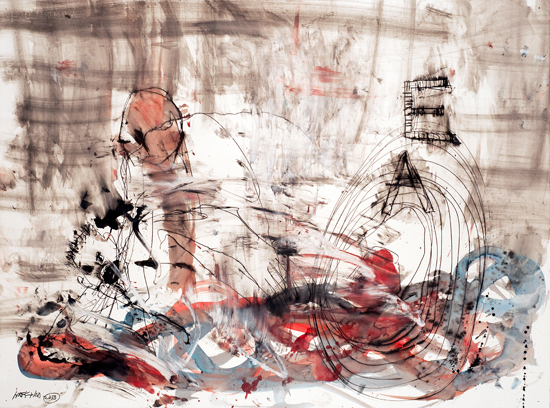 A few minutes later, I notice that puddles of blood settle in the gutters, their congealed crusts swarming with flies, ants and beetles. I drop to the warm earth, eating dirt in my terror. Blood stains the bright beaches and there are drag marks in the blinding sand to the surf, where bodies are carried out by the tide.

Stephen Trujillo was a combat medic with the 2d Ranger Battalion during the invasion of Grenada. He was decorated with the Silver Star for gallantry in action, and was cited by President Reagan during the 1984 State of the Union Address. Trujillo later served in Special Forces, and with DEA Operation Snowcap. The captions to the paintings are excerpts from the forthcoming book about Operation Urgent Fury and life in the Rangers. Used with permission. 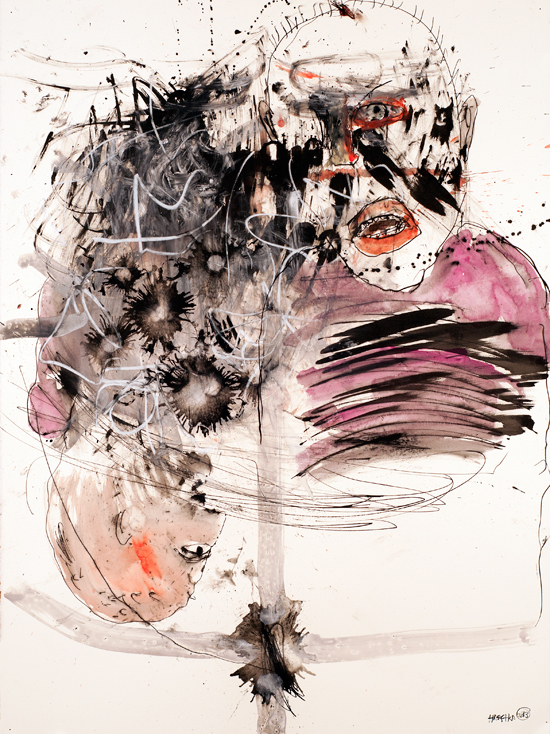 Our turn to go. We blow the claymores as we pull out, and we cover each other as we return to the shoreline. Andy tells me, "someday we should come back here on vacation." I look at him in outrage, but he is right. It is a beautiful place, or it was, until we blew the shit out of it. The students are gone and we are nearly left behind, but we wade into the surf and we pull each other into an overloaded helicopter hovering over the water, the door gunners heedlessly firing into beachfront homes. The copilot turns and yells at us to hurry. The chopper shudders beneath our weight and vibrates with the intermittent dings of bullets. In the confusion, another bird is hit and abandoned, and the crew runs to ours.