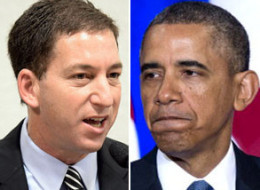 TAMPA, January 21, 2014 - Bill Maher interviewed journalist Glenn Greenwald following President Obama's speech on Friday in which the president discussed his proposals to reform the NSA. Greenwald is the journalist who first reported on the information released by Edward Snowden on the government's domestic surveillance activities.

While Maher was respectful of Greenwald and, to some extent, Snowden, he went out of his way to smear some of Snowden's claims about the government's activities as "completely nuts." He also found it necessary to take a shot at Ron Paul, who wasn't even involved in the issue at hand.

For Maher and too many likeminded people, anyone who doesn't view the government as a benevolent force for good is a tinfoil-hat-wearing kook who believes all civilian life is the target of a massive conspiracy involving the government, secret societies, aliens, etc. Thus Maher's retort, "Everyone in the government isn't out to get you."

That's what's known as "framing the debate." You're either with Bill Maher and President Obama or you're with the kooks. You may also be somewhere in the middle, where Maher apparently places Snowden. It completely ignores the many other perspectives one might have, including that of most libertarians.

Libertarians don't believe that the people who work for the government are evil. It's the institution of government itself, a monopoly on the use of force that can martial the resources of the entire nation. That kind of power is dangerous even when used by good people with good intentions.

This isn't some new age idea cooked up by pot-smoking libertarians in the 1970s. It's a founding American principle and the reason for the entire Bill of Rights. It was summed up best by Thomas Paine in the pamphlet credited with convincing most American colonists to support independence from Great Britain:

"Society in every state is a blessing, but government even in its best state is but a necessary evil; in its worst state an intolerable one; for when we suffer, or are exposed to the same miseries by a government, which we might expect in a country without government, our calamities is heightened by reflecting that we furnish the means by which we suffer."

Until not so long ago, Americans believed that. When it came to protecting the privacy of individuals against the surveillance powers of the government, it was liberals who led the way during both the Nixon and Bush administrations.

The government developed these surveillance programs during the Cold War, when the Soviet empire was the largest perceived threat to national security. Watergate proved that presidents can and will use those powers for other purposes, even political purposes. We now know that it wasn't crazy to accuse the Nixon administration of using surveillance powers for other purposes. It spied on both political rivals and private citizens. It may have even tapped John Lennon's phone.

No one said progressives were crazy when they accused the Bush administration of spying on anti-war groups, either. That's because they weren't.

Maher says Snowden is crazy to say, "They could use this system to go back in time to scrutinize every decision you've ever made, every friend you've ever discussed something with."

What's crazy about that? The government admits that it is collecting what it calls metadata on every phone call made and every e-mail sent in the United States. Does Bill Maher have people he calls "friends" that he has never once spoken to on the phone or conversed with by e-mail? Has he made any significant decisions in his life that he has never discussed on the phone or in an e-mail?

If so, it begs the questions: Why? Was he afraid someone was listening?

Most leaders who have abused powers believed they were doing the right thing. They weren't evil people participating in a vast conspiracy. They were good people pursuing what they believed were just ends. The Bush administration in particular cited the very same reasons for needing expanded surveillance power as Obama does now: the risk of terrorism.

The problem was their means. When your vehicle for positive change is at best a necessary evil, the slope is slippery no matter where you stand.

Government power is like a hammer. It can't be used to perform surgery. When the hammer swings, it destroys everything in its path. The Constitution and Bill of Rights attempt to keep the head small, lest it destroy our lives and liberties along with the evil it purports to fight.

As Greenwald pointed out during the interview, government collection of all electronic communications and warrants issued by secret courts with no accountability to the public used to be the stuff of 1950s science fiction novels. More accurately, it was a 1949 novel that warned against precisely this kind of government behavior. The government was just protecting its citizens against terrorism and foreign agents in Orwell's dystopian 1984, too.

To suggest that it should serve as a model for 21st-century America is just crazy.

Tom Mullen is the author of A Return to Common Sense: Reawakening Liberty in the Inhabitants of America.

Author of Where Do Conservatives and Liberals Come From? And What Ever Happened to Life, Liberty and the Pursuit of Happiness