The photo blog series Human of New York recently shared a portrait that has the LGBT community involved in a debate on discrimination. The series was started four years ago by photographer Brandon Stanton and captures diverse street portraits of New Yorkers, all different ages, races and backgrounds, accompanied by a quote or a snippet from each subject's story. Brandon leaves the quote or accompanied life snippet up to the subject -- this sometimes leads to controversial and shocking statements. A snippet that got many people talking was from a gay man. According to HNY, he said 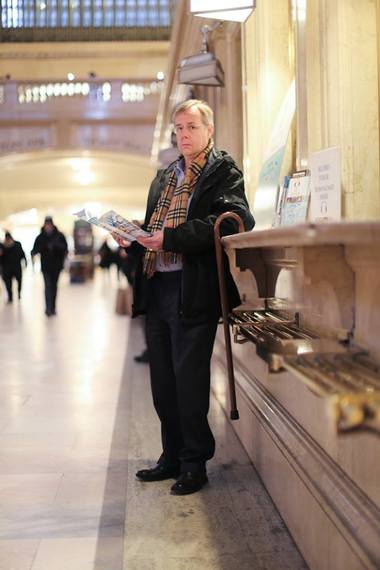 He was right on one thing: It was not a popular opinion.

Validating his experience is important. We should never ignore the testimony of experience a gay person puts forth. But the fact discrimination hasn't been a huge factor in his life is a blessing, not the norm. There are many of us who can't say the same, no matter how much we wish we could. His experience is his own, but it's not the rule -- it's the exception.

Statistically speaking, to say that LGBT people aren't discriminated against ignores all of the evidence of the contrary. This is insulting towards LGBT people and the LGBT community at large. His statement also ignores the fact that he is only able to openly identify as gay and give his opinion because of LGBT people who fought fiercely for his rights. Rights that are being taken for granted.

Just this week on my Christian Campus, Andrews University, while walking to class, a fellow class member looked me up and down in shock, and called me a faggot. A student I've never met before verbally assaulted me on a Christ-centered campus. Why? Because of the non-gender conforming jewelry and "tight" pants I was wearing. When I heard him say this, I looked at him, and said, "Excuse me?" Embarrassed, he didn't reply.

Would the man from the HNY photo think I was wrong to confront the person? Was I out of line to demand respect as a fellow human being, not to mention Christian? Maybe in N.Y.C., where that man from the photo lives, he feels safe (although recent, alleged hate-crimes there would lead me to sadly think otherwise). Not all LGBT people live in accepting metropolitan areas though. We LGBT people, from all over, have a right to feel safe in our work, churches, homes, schools and country. We deserve to not live in hostile environments.

The reason statements like this man's are problematic is because some people will see it, and use it as proof that LGBT discrimination doesn't exist. I have already been sent a link to the photo that said: "See! Here's a gay man not demanding respect!" Implying that I was wrong for demanding to be treated fairly. It's sad, but those who oppose equality will raise up any homophobic voice (gay or straight) that supports their reasoning that LGBT people deserve to be treated as less than.

Statement from LGBT people like these are used by those who which to oppose equality, as proof that equality is not a queer person's right. In an ironic twist, it is voices like this that are risen to large platforms, upon which they undo the work of past and current LGBT activists -- the same activists that fought, and still fight, for the right to make our voices heard at all.

Asking for equal rights should never incite discrimination. I will demand respect in my identity as a bisexual cis man of color. I will not accept anything less than equality. I'm not asking for more, I'm just asking for what is in my right as a human being. Legendary LGBT rights activist, Harvey Milk in Milk said "All men are created equal. Now matter how hard you try, you can never erase those words. That is what America is about."

Part of the reason this HNY statement doesn't reflect the majority of the queer community is privilege. We have to address the fact that a white, cisgender, gay man living in N.Y.C. who doesn't feel like he's being discriminated against does not speak for the whole community. As a white, cis man, the foundation he's making his opinion on and is one of privilege. Sure, he is still a minority, but not one that has to face the same adversity walking down the street that a trans woman in Alabama would. But it's not even necessarily safe for a gay white man living in N.Y.C. Maybe he was not there last summer when allegedly homophobic attacks ended in deaths in "LGBT friendly" neighborhoods, but I was. I became afraid to walk home alone after sunset, not knowing what kind of homophobic assailant could potentially be lurking in the shadows.

While white gay men definitely face their share of discrimination, it is queer people of color and trans people who have been dealt the blunt of discrimination, statistically speaking. And even more so, trans women of color face verbal and psychical attacks daily, many ending in death.

Statements on huge public forums like these matter. Things would have been much different if the subject of this portrait shared his experience of rarely being discriminated against. That would have been, and should be, applauded. It's a testament to the journey we have gone through as queer folk, as it was barely 50 years ago that we were still, legally, institutionalized for our sexual and gender identities. But when Christian presenters at youth conferences call LGBT people demon possessed, when laws are being brought up to "turn the gays away," and when trans people are imprisoned for standing up for themselves -- we can't ignore the discrimination and pretend it doesn't exist. As a community, we must address these issues, together, for the betterment of the entire community, not just those blessed with privilege.