At least New York's Archbishop Timothy M. Dolan, on wading into the controversy over a proposed Islamic Cultural Center and mosque two blocks from Ground Zero, got it wrong in the traditional way.

Deploying the M.O. that his predecessor Cardinal O'Connor used in bungling his response to a murderous fatwa on Salman Rushdie, Archbishop Dolan botched a chance to speak with moral clarity on Islam. And like Cardinal O'Connor, he did it by missing the main point of a debate in choosing the lesser of two virtues.

On Wednesday, Archbishop Dolan offered to mediate between those who support and oppose the center--a service that required him to set himself up as a neutral party by conveying to The New York Times that "while he had no strong feelings about the project, he might support finding a new location for the center."

In the unlikely event that both sides would agree to such mediation, there are others who could act as honest broker. Governor Paterson, for one, keeps volunteering for the job.

What Archbishop Dolan could better do--what he's uniquely qualified to do--is promote understanding and help tamp down an incendiary issue by telling the story of Irish Catholics in America. In particular, he could draw parallels between the hard road to acceptance traveled by his forebears and the path that American Muslims are now on.

Irish Catholics took a lot of bad raps during America's nativist era, which lasted most of the 19th century. You know the list: drunkenness, idolatry and the singing of cheesy ballads. Nowadays, we may smile at such ethnic stereotyping. 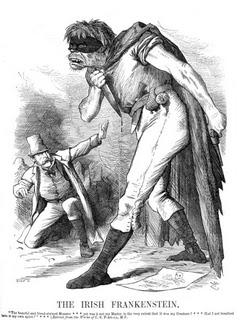 But the Irish were once seriously viewed as a pathological underclass bent on taking down the country. And they were flooding into New York. By 1835, over 30,000 "low Irishmen," described by diarist George Templeton Strong as "the most obstinate and ignorant white men in the world," arrived in the city each year.

Nativists loathed Irish Catholics for more than their immigrant crudeness. "The sudden spurt of Irish Catholic immigration seemed menacing too, in the light of Vatican support for various reactionary European governments," reminds Gotham, the classic history of New York. "Some believed it signaled an attempt by monarchists and despots to establish a beachhead in New York City, as a step toward infiltrating and overthrowing the republic."

This was no joke.

The Anglo-Protestant establishment accused Irish Catholics of the serious charge of Popery--loyalty to a religious authority at odds with the people and government of the United States. It is this same slur that has been updated by those who contend that American Muslims yearn to impose Sharia law on our soil, or that American Muslims are indistinguishable from any Muslim anywhere who takes that as a goal. In both cases, a majority brands a minority as not just incapable of assimilation but actively hostile to it. The real agenda of these aliens, says the nativist, is to destroy America.

If that's your perception, of course you'll be offended by a mosque built near Ground Zero. Or anywhere in the fifty states. Opposition to new mosques has sprung up from California to Staten Island at locations that are obviously outside the boundaries of the sacred ground created by 9/11, no matter how broadly you draw them.

Similarly, Old Saint Patrick's Church on Mulberry Street in Manhattan was seen by nativists in the 1830s as a flagrant and ongoing insult or, worse, a theocratic bulwark against the hard-won independence of American politics. (This was the era in which cartoonist Thomas Nast depicted Roman Catholic bishops as an invading wave of crocodiles, their miters drawn as gaping jaws.) 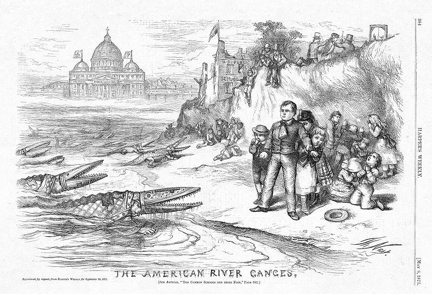 Given that history, how moving it would be to see Archbishop Dolan standing in front of the scarred brick wall surrounding the Old St. Patrick's graveyard that his predecessor, Bishop Hughes, built to repulse anti-Catholic mobs. How instructive to hear the sitting prelate recount the night in 1836 that a seething gang of nativists marched up the Bowery to level the church and start rooting out the seditious rot of Catholicism in New York. He could talk about how the church was saved when the nativists dispersed once they'd blinked and confirmed what their eyes were seeing: parishioners aiming rifles at them through holes poked in the wall.

More importantly, Archbishop Dolan could quote Hughes' famous rejoinder to John Breckenridge at a debate during which the Protestant clergyman declared Catholicism an enemy of democracy because of the Church's support for the Inquisition in Spain and tyranny in Italy and France. Hughes replied that it was wrong to tar American Catholics with the misdeeds of Catholics elsewhere, just as he did not hold Breckenridge responsible for "the scourge of Protestant persecution" that Hughes grew up under as a boy in Ireland.

Then the man from County Tryone got to the point: I am an American by choice, not by chance, he said. I know the value of that civil and religious liberty which our happy government secures for all.

Since I'm scripting Archbishop Dolan's press conference, I would have him look into the cameras and say solemnly: "I'm confident that those principles espoused by Bishop Hughes are today held by an overwhelming majority of Muslim Americans. And that is why, when this cultural center and house of worship is built, I will travel downtown to pay my respects to my fellow Americans, Imam Faisel Rauf and Daisy Kahn."

That would be leadership--a contribution to the controversy far more valuable than mediation.

Toward the end of his life, Cardinal O'Connor regretted criticizing The Satanic Verses without having read the book first. Maybe doing so would have given him time to see that what was needed was not to emphasize his sympathy for aggrieved Muslim sensitivities but to criticize a death threat by an organized religion.

That would've gotten to the heart of the matter. Archbishop Dolan can do the same if he will stand up and talk about Muslim Americans, and their mosques, in the troubled yet hopeful light of the Irish Catholic experience. Now is the time for it.