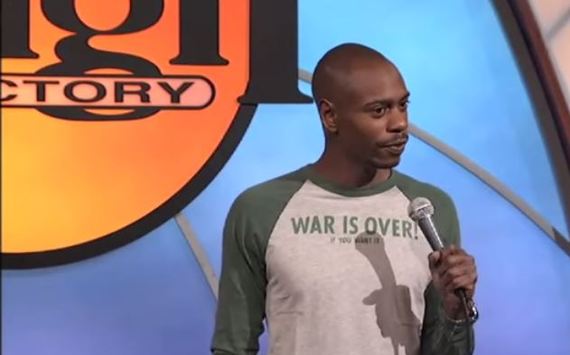 So, if you think running a small business is without constant legal hassles, let me tell you about my latest nightmare. This one is more ridiculous than the time a man wanted to sue me for hearing loss because he felt the comics were too loud. More outrageous than the time a man pretended to fall in the lobby but promised he wouldn't sue me if I let him perform on the stage for five minutes. More infuriating than the time we did a charity event for breast cancer, where we offered a discount to women if they brought proof of a mammogram, only to be later sued by a man stating that we were discriminating against men by not offering the same discount to them as well.

The sad reality of running a small business today is that, one simply gets used to these suits showing up as gunslingers in the new American version of the Wild West. However, one doesn't get used to hearing the reasons why they show up, and this latest one is truly preposterous.

Wednesday night, comedy's hide 'n seek genius Dave Chappelle did over a 75 minute non-stop juggernaut of a performance at the Laugh Factory in Hollywood. Just when I thought I had seen everything, during Dave's set, I encountered a new predicament about our legal situation.

The audience was screaming with laughter and the night manager was busy sliding between the tables asking people not to record Chappelle on their mobile phones or other devices. When she asked one patron to stop recording she was stumped by his response.

She told me the customer would not erase what he recorded. She said, "He told me he was an attorney and he said the tape was evidence if his friend or anyone else in the audience died from laughing too hard." He then pointed towards a man who was laughing so hard that he was choking. He said that being funny can lead to manslaughter "if the comic won't stop when he sees such an image." Hearing that made me very anxious; is there no bottom to the aim of a lawyer?

That night, Chappelle wouldn't stop, and some people actually looked woozy from laughing so hard. I was a bit scared, and started praying for the night to come to an end.

It made me more alert to possible dangers and I've been on the phone today with attorneys and insurance adjusters to find out if there is coverage for someone dying of laughter. I spoke to my attorney, William Dickerman, and he informed me that "there are enough creative and shameless lawyers who might sue on the flimsiest of grounds. Remember the McDonald's hot-coffee-in-the-lap case? It set a dangerous precedent. Maybe you should add a warning to the back of your tickets, 'If you die laughing, we are not liable.' Although I doubt even that would help."

I then spoke with my insurance agent, and she agreed with my attorney, and added that it doesn't matter if it's frivolous or not, my insurance premiums could go up.

I started wondering if I had been lucky for the past 35 years to never have to experience this anxiety. I can't imagine how nervous I would have been if I had been informed of this possibility years ago when I had Richard Pryor, George Carlin, Chris Rock and Rodney Dangerfield performing on my stage regularly.

When I think of SNL, or some of the great funny movies and plays, like Blazing Saddles, the Marx Brothers, and the Book of Mormon -- I think of how lucky they all were that nobody died! But this is America, and clearly, lawyers are already thinking of how to make a buck should laughing cause any complications.

I am offering this warning to theater owners, club owners and comedy producers around the country to make them aware of these potential lawsuits. The courts are overflowing with malicious and frivolous lawsuits that not only clog up the system, but they also cost small business owners like myself a fortune. If the government really cares about small businesses as much as it says it does, maybe it will start by doing something about these kinds of lawsuits. The old comic adages that one "dies on stage" or "killed the audience" are meant to be metaphors, not an invitation to manslaughter charges or civil penalties.

Should I have an EKG by the door to check on vulnerable hearts before admitting them? Or maybe a sign that says it's like being at a ball game, if you are hit with a foul ball, it's part of your wager of attending? Comments and advice are welcome.