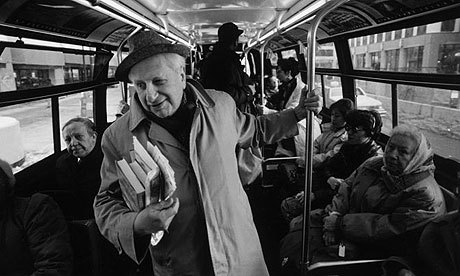 Studs Terkel is a Chicago institution, and he's ready for a reboot.

As one of the animating personalities in Thomas Dyja's excellent The Third Coast: How Chicago Built the American Dream, Dyja lovingly describes Studs' as the figure who "held together the scattered worlds of Chicago culture."

When Studs gave the 2002 commencement address at Lake Forest College, long before I became the Director of the Center for Chicago Programs (and only months after I had arrived in Chicago for the first time), he spoke to the need for education to do exactly what Studs always seemed be doing: "The purpose of higher education is to unsettle young men and women, to inflame their intellects."

He also shared something Mahalia Jackson once said to him: "Studs, you got such a big mouth, you should've been a preacher."

And so the Studs conference "Let's Get Working," presented by the University of Chicago and the Reva and David Logan Center for the Arts (May 9-11) is a chance to get in on the sermon.

Events include a screening of Medium Cool, inspired by Stud's book Division Street, a clown/physical theater ensemble performance about Studs' life and work (Halena Kays, director, and Jay Torrence, playwright), Reinventing Radio - An Evening with Ira Glass, Djya talking with others about Terkel's film and television legacy, and Making Radio with Studs & the Studs Terkel Radio Archive with WFMT.

Yes, Studs' reel-to-reel tapes from 98.7 WFMT were moved from the station to the Chicago History Museum in 1998 and then to the Library of Congress in 2011, and now, these tapes will start to go public in 2014 the Studs Terkel Radio Archive, via a free streaming website: www.studsterkel.org.

The Studs Terkel Radio Archive project is led by Tony Macaluso from WFMT, director of Network Marketing & The Studs Terkel Radio Archive, who details its development and the many people who have worked toward this release. I spoke with Steve Robinson, general manager of WFMT, who told me that "Studs is part of the folklore of the station...part of what WFMT is. He is an iconic part of the DNA," adding during our phone conversation that "His ghost is floating around the hallways to this day."

Robinson calls Macaluso "The standard bearer for this project. He's passionate and devoted," and below, Macaluso, talks about the project, his passion, and what Studs may mean for the 21st Century.

Davis: You think of Studs Terkel as a radio man, and he called himself a "disc jockey." Does the rest of the world think of Studs this way? If not, should they?

Tony: This varies fairly widely, but in general I'd say based on lots of conversations that people outside of Chicago are much more likely to know him as an oral historian because of his books. The fact that he interviewed so many great writers, musicians, actors, scholars, social activists, scientists, etc. day after day is something of a surprise to many. The way Studs used the human voice (his own, his guests, the pauses, the little sighs, exclamations and of course his gleeful cackle) is so powerful and will be a discovery for people exploring the radio archive.

Davis: Yet he does more than just talk to his guests, yes?

Tony: There's also Studs the experimental sound collage artist. Mixed in with all of his interviews there are occasional radio programs that are masterpieces of sound art, mixing music, ambient noise, conversation, theatrical performances. One of my favorites is his work "Come in at the Door" based on various Nelson Algren short stories and novel excerpts made in the early 1960s. This is absolutely on par with the best 21st century story-telling radio with all of its inventive edits and layering of sound.

Or Studs' prize-winning documentary "Born to Live" that weaves clips from the train ride to Washington D.C. for the Civil Rights March, conversations with survivors of the atomic bomb dropped on Hiroshima and dozens of others subjects into a mesmerizing hour of radio.

Davis: "Born to Live" has quite a number of participants.

Tony: Below is a "cast list" of that single one-hour radio doc to give a sense of the scope:

I think a program like this -- created in partnership with the great WFMT producer and editor Jim Unrath -- is an amazing embodiment of Studs' omnivorous nature. You can listen to "Born to Live" here.

Davis: The WFMT archive is massive, at 5400 surviving programs spanning over 45 years. What changes do you notice in Studs' style, questions, etc., from interviews recorded in different periods? Put another way, is Studs always constant?

Tony: He definitely changes. If one listens to many programs over the past months, tonal differences from various years become apparent. Of course certain themes emerge: you find a sudden expansion of interest in the non-western world (China, India, Japan) that grows stronger with time. There's also a tendency to use quite different tactics in getting different interviewees to talk.

In some interviews Studs remains silent for many minutes at a stretch, only occasionally prodding with a brief monosyllabic nudge here or there. In other interviews Studs becomes a kind of sidekick or comic or empathizing partner, creating banter of shared wit or commiseration or indignation or wonderment with his guest: like Vladimir and Estragon in Waiting for Godot. I can imagine Studs and Mahalia Jackson....Zero Mostel...Kurt Vonnegut...Buster Keaton going on and on, indefinitely finding new variations.

Davis: What accounts for this opening to the non-Western world? Is it a personal change, or a one that mirrors his politics, and the increasing global entanglements of the US?

Tony: I can't truly speak for what motivated him, but I think it stems from his unbounded curiosity ("curiosity did not kill this cat" was a favorite phrase of his). I think one encounter led to another. A good example is his interest in China. In the late 1970s (corresponding with U.S. engagement with China) he suddenly started to do a large number of programs related to China. He traveled there in 1981 to conduct dozens of amazing interviews, and he was planning on writing a book about China (which sadly never happened). I think he had a good antenna for sensing parts of the world in moments of transformation--where the future was still undetermined. That's probably what drew him to South Africa in 1963.

He was drawn to places in flux.

Davis: Was there anyone Studs didn't want to talk to? I imagine that producers booked the guests to varying extents... What type of conversations went on behind the scenes in terms of these decisions?

Tony: Lois Baum, Sydney Lewis and the others who worked directly with Studs can confirm this, but my sense is that Studs was quite allergic to PR-chatter. If someone was inclined to "promote," to boast about their latest creation in a scripted way, Studs was not interested. He definitely wasn't interested in celebrity. He might have immensely famous people on the show...but only if the guest had a knack or a yearning to escape the trappings of notoriety and wanted to really enjoy a conversation about ideas and experiences. He was also not afraid to make his political beliefs known which could influence the selection of guests.

Davis: Sounds like a good cable news soldier, but I bet he wasn't.

Tony: Studs worked in a way that strikes me as very different from how many contemporary media folk do it today. Some of his favorite guests were those who belief systems were wildly at odds with his. Those conversations are especially rich in humor, warm-hearted sparring, real puzzlement at the complexity of society, and a sense that there were consequences to ideas. And then there's the way he prepared for interviews. His reading books by his guests with tremendous appetite, with page after page after page marked up with his annotations. Writers invariably mention the incredible respect they felt being interviewed by someone who read their work with great diligence. For a delightful behind the scenes account I highly recommend Sydney Lewis's radio doc "Working with Studs."

Davis: This attention to the work of his guests probably makes Studs more informed than many working in radio today, and I wonder how he found the time to do it all? Radio was his vocation during these years, of course, but I have the sense that he was a person involved in a thousand activities at once. How do you think he balanced it all, if he did?

Tony: This is one that I really can't answer. But I'll speculate a little. He clearly had tremendous patience and ability to focus. He was notorious for engaging everyone around him in conversation. I constantly hear stories about how here at the radio station or the Chicago History Museum (where he spent a lot of time at the end of his life). He would have long, in-depth conversations with interns, the security staff, the janitors, and the people working in the café. The flip side was that he didn't tolerate formalities. He didn't like meetings; he was fairly allergic to bureaucratic process. Answering mail wasn't always a big priority, so my guess is that he was liberated from a lot of the busy-work that consumes so much of our daily lives (especially in this age of email and mobile devices) and that allowed to focus on reading, preparing for interviews and engaging directly with people.

Davis: How should someone who knows the name "Studs Terkel" but little else approach the archive (let's imagine it is now completed)? What are the entry points for the uninitiated, or the only partially initiated?

Tony: The archive is being designed very much for people who are unfamiliar with Studs and his work. Our hope is that some kid in China or South America or Africa is googling Martin Luther King or Simone de Beauvoir or Buster Keaton, etc., and finds an interview with Studs. We hope that listener becomes captivated and starts exploring, and as a result, gets a whole immersion in huge areas of 20th century culture, history and politics that may have been unfamiliar.

Davis: This isn't just about passive consumption though.

Tony: This is the part we're especially excited about. We hope this listener takes advantage of some of the digital tools that we'll be providing to create their own audio works inspired by and/or using Studs' archive. In the end, as important as Studs is as an individual, it's the methodology, the spirit, and the impulse to find stories that he championed that we most want to perpetuate. 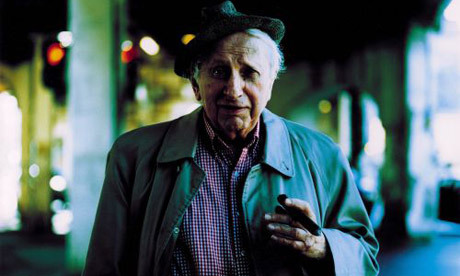 Davis Schneiderman is Associate Dean of the Faculty and Director of the Center for Chicago Programs at Lake Forest College. His most recent work is the appropriation novel [SIC].