A powerful new documentary is being screened this week at the Center for Jewish Heritage on Manhattan's West 16th street: "The Last Jews Of Bagdad; End Of An Exile, Beginning Of A Journey" produced by Carole Basri, an energetic American filmmaker of Iraqi descent, together with Adriana Davis and Bryan Durr.

It's a fitting time for this co-production to be shown. 2014 marks the 2600th anniversary of the destruction of Jerusalem's First Temple by the Babylonian Emperor Nebuchadnezzar - and the beginning of the enslavement and forced exile of the Jews into what would become the longest diaspora of the people of Israel from the Land of Israel.

Yet despite their sad longing for home ("By the Rivers of Babylon, there we sat and wept when we remembered Zion..." ) -- the exiled Jews soon flourished. Their scholars produced the Babylonian Talmud, one of the central texts of Rabbinic Judaism. And despite bouts of persecution, the Jews of Babylonia -- today's Iraq -- soon became leading figures of science, medicine and arts, of finance and of commerce. By the 19th century, synagogues, schools and rabbinical academies dotted the land. By the turn of the 20th century, Jews comprised more than 25 percent of the population of Baghdad, the Iraqi capital. Some became advisers to Iraq's kings and then presidents. One -- Yehezkel Sasson -- was considered "The Father of Iraq's Parliament " and even served as royal Finance Minister.

And then, at the mid 20th century, it all ended. With Iraq's tyrannical military governments spouting virulent anti-Semitism and anti-Zionism, Iraq's Jews found themselves facing a mounting flood of discriminatory laws, restrictive policies, even pogroms and public hangings. Soon, most of Iraq's Jews began searching for ways to flee. Between 1949 and 1968 more than 150,000 Iraqi Jews left their land of birth for shelter elsewhere. Most went to Israel; some to Europe and America. The price of leaving was stiff: In exchange for a government exit visa,: Iraq's Jews had to formally renounce their citizenship, promise never to return, and most important of all -- leave behind all of their property and money. Most arrived in their new homes penniless.

When I first visited Iraq as a correspondent in 1989 -- the year before the First Gulf War, barely 400 Jews remained in Baghdad. Only one synagogue -- The Meir Toueg -- remained open and Abraham Sofer, its aged gabbaii (sexton) said few dared even come for sabbath prayers, 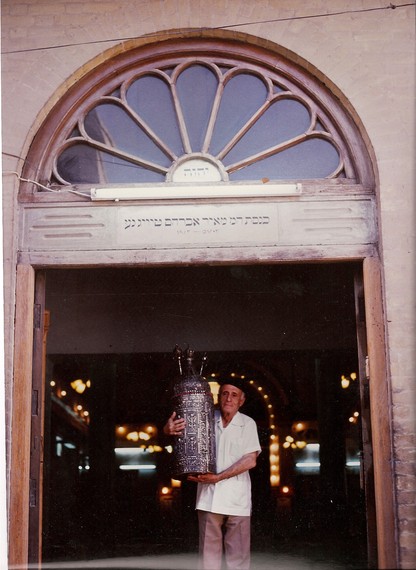 Worse yet, whispered Sofer, the vicious regime of Saddam Hussein, had stolen historic communal documents and even the only Hebrew printing press still extant in Iraq. New prayer books had to be written by hand and children were forbidden from learning Hebrew.

In 2003, when filmmaker Carole Basri and her colleagues arrived in Bahdad, even this last synagogue was closed and the once proud Iraqi Jewish community numbered just seven people - most of whom hid the fact that they were Jews in order to remain safe from the violence of post-Saddam Iraq.

This moving film asks the question, "Why did the Iraqi Jews leave?" The answer, of course, is found in the discriminatory policies enacted by Iraq's government against these formerly important members of Iraqi society who even today still consider themselves "Iraqi Jews". As Basri explains: " 'The Last Jews of Baghdad" offers personal recollections from members of this exiled group, contextualizing the country's complicated political history. Through the words of those who survived discrimination, persecution and even hangings, we have painted a picture of what it meant to be a Jew in Iraq - from joyous picnics on the banks of the Tigris to the unbearable terror of life under Saddam Hussein that came to define their lives."

For a fascinating exhibit of stolen Iraqi Jewish documents found by the US Army in the flooded basement of Saddam Hussein's Baghdad headquarters and brought to America for preservation and restoration, go to:
The Museum of Jewish History
36 Battery Pl, New York, NY 10280
(646) 437-4202