I took on this project with great trepidation because so many great artists have already interpreted this important work.

Never mind, I took advantage of the form to interpret the material in a contemporary manner. I changed scale and emphasis to fit the situation in opposition to the static, uniform boxes of most graphic novels.

Dante plays himself as he travels to the other side with classical poet Virgil. They, and the other characters are depicted in 1930's dress. I meant Dante to look like a Dashiell Hammett detective, searching for the truth. The Dante character looks for answers unseeable to mere mortals, by traveling respectively, to Hell, Purgatory and Paradise.

The following images are taken from my translation of Dante's "Divine Comedy," as well as examples of my other work that helped inform my creative process.

"The Divine Comedy" can be purchased here. 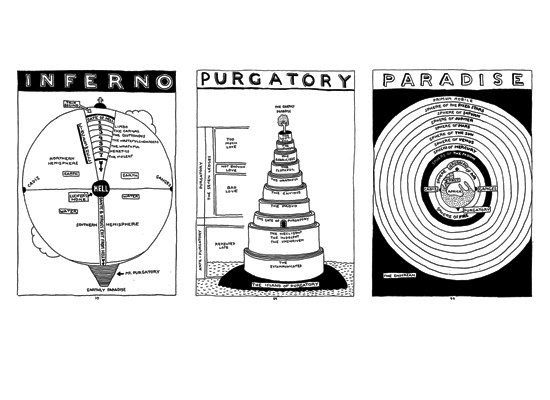 1 / 12
Three diagrams introduced the sections. They were designed to legitimize the three homes of the afterlife and to establish the physical presence for them.