The Gay Men's Chorus of Los Angeles (GMCLA) made history as they showcased their historical past during their 966th performance celebrating their 35th anniversary along with the Southern California premiere of I Am Harvey Milk at The Walt Disney Concert Hall this past weekend.

The concert was in two acts. In Act I - The City of Angels, GMCLA gracefully coalesced the past, present and future as they invited their youth choir, Outside Voices, and choral alumni (including some of those who were there at the beginning in 1979) to join them. They offered stunning nuggets of songs that have changed hearts and minds over the past 35 years while paying tribute to the City of Angels. Highlights included Stephen Schwartz's "Beautiful City" and the Mama's and the Papa's "California Dreamin'" along with the world premiere of "Nebula of Angels" - an original piece commissioned for their 35th Anniversary composed by David Volpe with words by LA poet, George Wallace. On this night GMCLA confirmed their spot as one of the jewels in the crown of Los Angeles.

Act II marked the Southern California premiere of Andrew Lippa's (who gave a powerhouse performance in the title role, also known as composer/lyricist of Broadway hits including The Addams Family and The Wild Party) oratorio I am Harvey Milk. It chronicles the story of Harvey Milk's life, from boyhood to his election as the first openly gay man to serve in public office in California and to his untimely assassination. Part choral work and part theater piece, I Am Harvey Milk is an exceptional and emotional celebration of a true American icon. The oratorio was co-commissioned by seven gay men's choruses, including GMCLA. Featured in this emotional tribute were Quinn Morrissey -- a kid with great vocal presence, as the young Harvey Milk and Alexandra Silber as "Soprano."

Cleve Jones, founder of the AIDS quilt and friend of Harvey Milk, introduced the premiere saying all he could think when he heard the news of Milk's death was, "It's over. It's all over." But later that night, as hundreds of people -- and then thousands of people and then tens of thousands of people -- marched from the Castro District to City Hall carrying candles, and as a small group of men got up and sang on the steps of City Hall -- the first performance of the newly formed Gay Men's Chorus -- he thought "No ... it's not all over ... it's just beginning."

And so too began GMCLA's historical premiere of Lippa's I Am Harvey Milk at The Walt Disney Concert Hall. GMCL offered this thrilling and emotional oratorio along with the stars and members from other co-commissioning choruses (amounting to an astounding 500 male voices on that stage). Noteworthy highlight's from Lippa's score included "Friday Night in the Castro" a disco number that allowed us to reminisce about the joy and freedom of gay life in pre-AIDS San Francisco. "I am the Bullet" was a cutting edge choral number from the bullet's point of view about its neutrality from the trigger to Harvey Milk's head. Alexander Silber who soared in her upper soprano register offered the self-reflective "Was I Wrong" and empowering "Leap," a Harvey Milk anthem about taking the risks that put his life on the line for the gay community.

We watched GMCLA's and Harvey Milk's past magically become the present with guest activists in the audience who have helped make great strides in the LGBT equality including George Takei (whose documentary To Be Takei will soon be released) Paul Katami and Jeff Zarrillo (plaintiffs in The Case Against *) and Cleve Jones. We also took comfort in the voices of GMCLA's youth chorus, Outside Voices, and looked to the future knowing that Harvey Milk's legacy will live on forever and that Gay Men's Choruses across the globe will ensure that our message of love, freedom, and equality are heard. 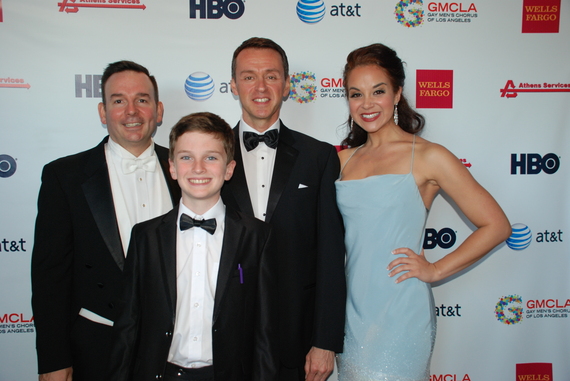 GMCLA Conductor: Joe Nadeau with the cast of I Am Harvey Milk