This is the first in a two part series discussing the author's experience and questioning of what he, as a reader and 21st Century American, wants as far as "reality" goes in non-fiction, television, and pop culture. It is a story about family.

It's quiet when I step into the office of the City Center Motel.

I'm alone -- surrounded by well-worn furniture and construction tools. There is nobody behind the desk, this silence is a fact greatly amplified by history. If the office looks like it did thirty four years ago, Ben Bushnell bled out his life on the ground at my feet.

The drive in through Provo Canyon has been beautiful but marred by slow moving traffic and signs announcing a festival and I am worried that all rooms in the city are taken. Especially the room I think I want. I drive along University Ave., dimly aware of the BYU campus on either side of me, but focused straight ahead. I feel a sense of something between relief and apprehension when I pull into the parking lot and find it empty of all but two cars and a pile of discarded mattresses and bedframes. I have the opportunity, and in ways that I am reluctant to admit, the opportunity has me. I am now held captive by years of loose plans turning to concrete as the sun sets over Provo.

When the clerk arrives, he is fresh faced and smiling, appearing to be shocked that there is somebody standing in the office. I ask about vacancies because the question has been rolling around in my mind since I left Laramie in the morning. I have been worried that I will not be able to get a room because the man I spoke to the night before said that the motel doesn't take reservations. It is first come, first served. Like a fine restaurant. Like tickets for entertainment.

But this is not entertainment.

Of this, I am quite certain. It is real and I have questions for myself that I am not interested in answering. Not right away.

The clerk offers to show me the room first.

"Is there something wrong with it?" I ask.

We both laugh. Nervously? Another man comes in to the office, starts to clean the glass door.

"How much for the room?" I ask the clerk.

I hand him two twenties and sign myself in. Commit myself to the place. Further.

"What do you do?" The clerk asks, making conversation while he fills out the rest of the paperwork.

"Mysteries. Crime fiction," I say, and immediately wish I hadn't. Have I given myself up as one more curiosity seeker trampling over a place best left to the unaware?

And I ask myself, what does he know?

"This guy here," he points to the man cleaning the door. "He's into ghost stories. Hauntings. Sometimes at night he turns into a ghost himself to scare his children."

I look at the man, maybe in his mid-40s. He seems embarrassed by the description, as though he is being judged.

And I ask myself, what does he know?

I am handed a key -- an actual cut from metal relic attached to a plastic key chain like I remember from family trips to Florida decades ago -- and told "Your room is right here, right in back of the office." 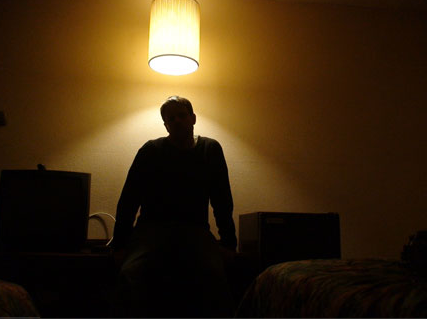 There is nothing fancy about the room. There are two beds, one of them has a headboard, one does not. I leave the lights off. I can't get the television to work. It is stuffy, the air hanging with humidity and a faintness of dust. The vent cover is off the air conditioner and the thermostat seems like it may have been original to the building. I suppose it won't work. Don't bother to try.

I sit on the edge of my bed and ask myself -- what now? What were you hoping to find? That the night will play itself out again, that you will have a better understanding of the history if you are there to see it firsthand?

I am the dog who has caught the fender.

A man was murdered thirty feet from me. The murderer was executed. Books have been written. Movies have been made. Lives have been changed, for better or for worse, forever.

I have spent the better part of a day retracing history, squinting into the wind, trying to imagine how things were before. What would the world have looked like then? What about the choices that followed? The permutations are endless, the mind buzzes, and before too long, the lines between real life and fiction blur. My stomach worse for the illusions.

There are noises on the other side of the wall. Are these the ghosts the clerk laughed about?
There are chains rattling around my head. I don't know, but there are honest to goodness specters rattling chains around my head. How much of what we read -- even non-fiction -- is meant to be consumed from a distance? Is there something wrong with me because I am here? Have I invaded the privacy of others? The voyeur culture is alive and well in America, have I hit the outer fringes of it? Do I think less of myself if that's the case? The questions keep coming. The answers don't.

Dark settles. I am restless and the noises play hell on my nerves. Before long I pack up my things, put them back in the rental car, and check out.

Like I've done a hundred times before, I look to the road for answers.