Ron Bloom doesn't have to be in the entertainment industry. In fact, given his track record for making money for a lot of people, he really doesn't have to do much. And yet, here he is, literally in the heart of Hollywood at the BiteSizeTV studios on the main floor of the W Hotel right on Hollywood Blvd.

Why? When I am asked about being in the business I often tell people if you can be anything else, if you can do anything else, stay out of the entertainment industry. It's a horrid business of let-downs, auditions, opinions, delays, missed opportunities, frustration, constant blows to the self-esteem and in all but a few cases, poverty. So what's a nice former Silicon Valley entrepreneur doing in a place like this?

"Well, somebody's got to get out here and fling mud somewhere!," the easy-going, no BS dapper Bloom began. "There's ditches to be dug everywhere and we're helping dig the digital ditch and that says it all," he laughed.

But it's no laughing matter. Bloom is the man that helped bring a way for 1 billion video views by over 25 million people a month possible (read Netflix and other streaming services) with the company Mevio. That company grew out of one of the most successful partnerships of his life.

Years ago MTV's Adam Curry basically invented PodCasting. Today, for those in the know, he is still thought of as the father of the now popular way to deliver shows.

Bloom is a contradiction. Artists usually aren't good with money, it's why they're surrounded by agents, managers, accountants and why so many lose so much. Bloom is a musician himself, still, it's how he started.

"I started as a musician," he proudly reflected. "We built a studio in Toluca Lake partnering with Chuck Norris, the king of Kung Fu and good television, played on hundreds of records, wrote a few, published a few, got a few good ones," he humbly acknowledged. To this day he still grabs a guitar and "jams with friend Dave...you know, Dave Stewart." Of course, why not.

So having changed audio with Podcasting and video delivery possibilities with Mevio, why BiteSizeTV and why now?

"The Internet said anyone can put someone on it. Well, that did two things: first, it created a lot of crap, like happened in music and film. But it also created a small amount of genius too. What we try to do with BitesizeTV is be a little more thoughtful and little more interesting and provocative about the side that puts stuff on it," he concluded.

Their shows are fast, funny, often irreverent. They focus on gossip, news of the day, women's issues told by younger women, a lot of entertaining short-form content that is taking off. Screens in places like 7-11 now program BiteSizeTV content and even Fox Television has picked up some of the entertainment shows for traditional broadcast.

Bloom appears to have a Midas touch, and a knack for changing the playing fields of major games. And these changes in TV and Web programming (Or Tweb, as I, Karel, coined three years ago) ignite a passion in Bloom just as fresh as decades ago when he started down the content delivery via internet pathway.

"Television in this town of Hollywood, just like music, has a tremendous amount of legacy, a tremendous amount of creative talent and creative processes," he began as another show goes live out in the studio to one of BiteSizeTV's channels. "The Internet in the early days in Silicon Valley said screw Hollywood, we know better, we're the engineers. I didn't agree with that. That would be like records being all sung by engineers. I believe in the three legged stool: there's the platform that is the engineering, then there's the behind the camera, the writers, producers, directors, and then there's in front of the camera or microphone. So we said no, let's bring it all together. The greatest failure in the recent history of modern investments is the failure of Hollywood to invest in Silicon Valley," he stated emphatically.

"But that creates opportunity," he continued. "Just because Hollywood as an institution didn't want to do it, others did and do. Someone else will come along and cost effectively make that movie that will fill that slot for you, you'll pay the money and that's where it's going. We're past the part where it starts with kids in the garages. Like music. There's an evolution where there's a system that falls in to place where kids in garages can turn something in to something more professional. Then, there's a new type of distribution that occurs, and that's where we are with BiteSizeTV," he added, staring at the streams of shows before him.

The studios are filled with millennials, all writing, producing, editing, streaming, filming, talking. If there's a downturn in Hollywood, you wouldn't know it at BiteSizeTV. So why is it growing when other entertainment companies are tightening belts?

"We said let's make something fresh and live every day. The part of programming that maybe Hollywood as a whole turns its nose up to," he started to explain about BiteSizeTV's mission. "You're at a big Hollywood party and there's the tattooed guy in the corner whose made a great independent movie that no one's ever going to see, talented guy, he's surrounded by every beautiful lady in the room. Then there's this other guy, maybe a little disheveled and eating cheese on a cracker and he's maybe producing Oprah. Well Oprah is a 14 billion dollar franchise and the other is too hip for the room. So we had to figure out how do we take that hipness of that coolness and make it fresh free and live every day. That's what young people want, they want to wakeup with something different than they went to bed with."

It's that understanding of the audience that is bringing BiteSizeTV to the attention of major players in the entertainment / content business. And Bloom doesn't mind being in charge of another groundbreaking company with Curry, as they innovate program creation and delivery in the video entertainment world.

"It's good to be the man. We are green lighters. We have our hands in it. We muck around and get in there" he laughed, obviously recalling some previous mucking. "The big thing for us is we don't take ourselves too seriously. We don't have to ask for permission to put something we believe in on the air. So, we can screw up on the air. They want to see that. The screw ups are pretty entertaining. Yesterday the fire alarm went off with a big celebrity in our studios and we just kept going!"

Not asking permission and keeping going are two things Bloom and Curry seem to excel at over the last two decades. They've made fortunes and now are risking a big chunk on their record of being innovators and entertainers. BiteSizeTV isn't letting either down. Now, I have to go ready a treatment. Bloom's enthusiasm is contagious and BiteSizeTV will see more stars and more pitches as they grow and expand.

To hear this interview with Mr. Bloom with Karel get the Karel Cast App, subscribe in iTunes to the Podcast or simply go to the most incredible website on all the planet, save this one, iamkarel.com

Bloom Taking a Bite Out of Hollywood With BiteSizeTV
BiteSizeTV and Ron Bloom, CEO 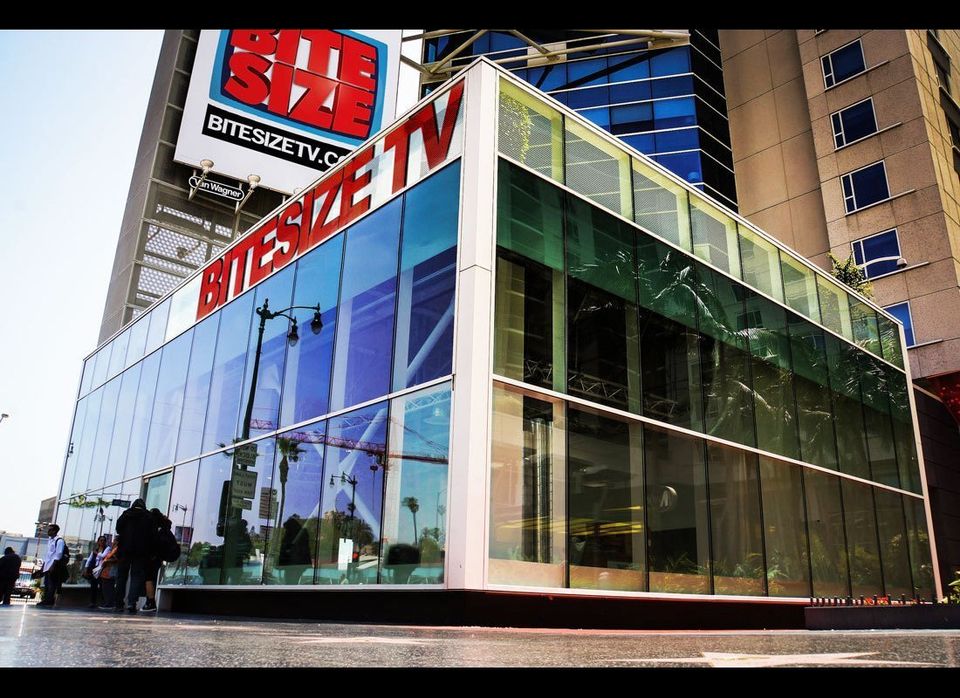 1 / 5
In the Belly of The Beast
BiteSizeTV sits on Hollywood Blvd., in the main floor of the W Hotel and across from the iconic Pantages Theatre. Like it's programming, it's in your face TV.