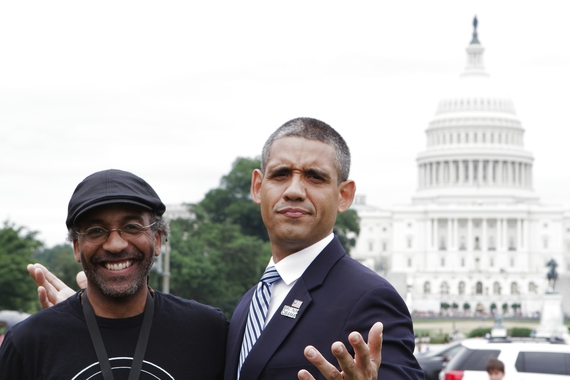 "Everything's changed! Everything's Changed!", exclaimed the young African American boy, jumping and cheering on the streets of The Bronx. Barack Obama had just been elected as the first African American President of the United States. It's impossible to know if the young man, in his excitement, grasped the truth and the fallacy of his statement. Indeed, things did change.

The newly elected 44th President would endure division and criticism of an unprecedented nature. His political opposition would challenge nearly every initiative he put forth, with the resulting governance usually mired in gridlock and inaction. His new profession, which he was seemingly destined for, came without training or preparation. And his family would also learn alongside him, the struggles of being the first.

The similarities between Barack Obama and Louis Ortiz extend beyond being a parent, and struggling in a new job. The most obvious similarity, and the most life altering for Mr. Ortiz, was his physical resemblance to the former freshman Senator from Illinois. "If you woke up one day and looked like the most powerful person in the world," exclaims Ortiz, in the excellent documentary film, The Audacity of Louis Ortiz (Bronx Obama), "wouldn't you do that? Wouldn't you do what I'm doing?" First time director, Ryan Murdock explores issues of fatherhood, race, politics and the cynical environment that surrounds Mr. Ortiz, newly employed as an Obama impersonator, whose circumstances place his life on an entirely unexpected course -- and he does so with aplomb.

Even before the 2008 election, the political discourse in this country had increasingly been filled with rancor and partisanship, making it difficult to find a truly objective opinion. Murdoch deftly crafts this documentary without tipping his hat to either side in the political fray. In fact, he manages to present Ortiz as a man, separate from the construction that is Barack Obama. The viewer watches as Ortiz progresses from a self employed entertainer in Times Square, to his often rocky tenure with the comedic troupe of Presidential impersonators he joins. His interactions with the public, both the ones that love and the ones that hate the man whom he impersonates, reveal the complexities of public feelings held, as well as for the system itself.

Ortiz, having accepted his serendipitous fate, shows his discomfort at one point in the film when explaining that for donning the uniform, "I gotta hear the shit, for him." It is a curious position that he, as well as the other impersonators navigate professionally and emotionally, and the challenge is particularly acute for Ortiz as hatred and racism are more often the catalyst, rather than differences in one's politics. Serving as the antagonist in the film, whether by necessity, or actual philosophical leanings, the comedy troupe manager, Dustin, who also writes the material, often trots Ortiz and the others in front of blatantly right-wing and conservative audiences to deliver barbed satirical routines -- red meat for the "Libertarians" and Ron Paul supporters."

In a particularly tense exchange, Dustin asks Ortiz what he thinks of the jokes, and Ortiz, Bronx native of Puerto Rican descent forcefully says, "I think they're borderline racist." It is the third rail of American social and political discourse that most people are unwilling to address that Ortiz, by virtue of his new profession, must endure regularly, and it clearly wears on him. As an African American man, watching the film was often uncomfortable, and even more often enraging. The insult and innuendo are readily apparent to many in society, and many more refuse to acknowledge it -- which adds to the anger. This is the common struggle America faces, and Murdock bravely approaches the topic, while maintaining an objective distance. It is an admirable feat.

To be clear, Ortiz' motivation isn't simply for fame and financial reward. His dedication to his daughter is shown throughout the film, and the challenges he accepts are for wont of her well being. It is, I'm sure, another example of the crucibles of parenthood. It also must be stated that the film isn't meant to be a diatribe against racists and those in opposition of Obama. It is also a very entertaining and comical view at the life of a particular class of entertainers, and the unique challenges and opportunities they live with. There are many poignant moments in the film, such as a Spanish speaking "Statue of Liberty" who meets and greets Ortiz as Obama. In the next frame, without his statue mask on, he says to Ortiz, in clipped English, "I love America." It is a sincere display of hope and optimism, without corniness or irony.

When Ortiz makes a surprise visit to his daughter during her junior high school basketball practice, we see another side of the burden they as a family must bear. His resemblance to Obama obvious, Ortiz' daughter must now explain to her friends how and why her father makes the living he does. It is another of the many humanizing moments that makes one consider what the real First Family must go through. As the incumbent President, Obama states during a 2012 interview, "there's a character people see out there called Barack Obama. That's not you. Whether it's good or bad. It is not you." This film, while not able to fully define Obama, or Ortiz, does a better job of posing the questions of definition to ourselves.

The version the film reviewed was entitled "The Audacity of Louis Ortiz" and screened during the AFI DOCS Film Festival. The film will be released digitally on October 6th, and broadcast on Showtime beginning on October 29th.

The Construction of A Black President from Craig Carpenter on Vimeo.