When one thinks of rainbows in the United States, a few things immediately come to mind: pots of gold, Judy Garland, and gay pride. And if we're being honest, the last two may as well be one and the same. While other symbols have waxed and waned in popularity -- be it the lambda sign or the pink triangle -- the rainbow flag, Gilbert Baker's 1978 creation, certainly has staying power. Indeed, gay pride parades the world over are positively littered with a kaleidoscopic orgy of rainbow carnage. Above and beyond the radical origins of the flag, however, one force more than all others has worked to cement the rainbow flag as the symbol for the gay rights movement: capitalism.

Even a cursory glance at recent pride events show the uncomfortable union of capital and activism: whether it be a TD Bank float adorned with scantily clad gay men in rainbow thongs or the iTunes store selling Pride Playlists, the rainbow flag has been co-opted by the capitalist machine to squeeze those gay dollars out of a burgeoning consumer niche. If I sound paranoid, take a look at the most recent rainbow-wrapped "Pride Whopper" from Burger King. 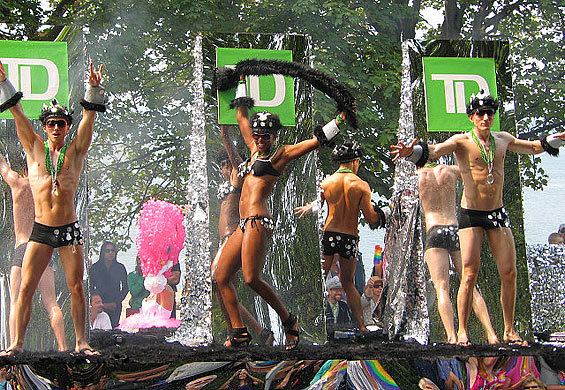 While many rightly extol the benefits of LBGT-specific marketing as a step towards full equality (something once thought unimaginable not two decades ago), I cannot help but wonder: what do we lose as a result?

A recent artistic intervention by the Helix Flash Collective known as the "Queer Crisis Collective" in New York City is perhaps the most innovative response to this conundrum. The collective, describing themselves as engaged in "political art-making," focuses on "a small group of people" gathering "for a very brief, concentrated period of time to produce a single artistic intervention in public space." In April this year, the rainbow pride flag was taken to task. The project is a simple sticker of the rainbow flag that attempts to educate the public on the symbolic meanings of the chosen colors: red for life, orange for healing, yellow for sunlight, green for nature, blue for serenity, purple for spirit (and the missing hot pink for sexuality and turquoise for magic). Plastered on each color of the rainbow are questions that relate to these original ideals. Red asks: who thrives, who dies? Yellow asks: whose history survives? And so on.

The idea of reclaiming the flag to get back to its radical roots appeals to the queer activist within me. The art project staunchly rejects the corporatization of gay symbols for profit, looking instead at the ways homelessness, poverty, racism, transphobia and ableism touch the lives of many queer people in uneven ways. In a conversation I had with Avram Finkelstein, one of the artists behind this project and others such as the iconic Silence=Death poster, he mentioned that the collective knew pride goers "would grab anything that had a rainbow flag on it," saying, "what better way to talk about how assimilation is privileged over radical forms of queer resistance than a radical re-reading of the ubiquitous rainbow flag, the thing everyone is surrounded by that day?"

Purple asks us, "Who is missing?" when we see Wells Fargo rainbow flag shine in the bright June sun. Missing, of course, are those countless homeless queers royally screwed by a government more willing to bail out big banks than care for individuals at the margins. I cannot think of a greater misappropriation of a once radical queer symbol. "There is no dipping your toe in the waters of capitalism to see if you like how it feels," says Finkelstein. "If your toe is in, look again: you are already up to your eyeballs."

Queer artists, activists and scholars are masters at turning cultural symbols on their head, to "reclaim" words and icons once thought derogatory to create spaces of culture and healing (the word "queer" being perhaps the most recent and ubiquitous example). But what happens when capitalism co-opts one of our icons? Is there a way where we can -- ahem -- rereclaim the radical potential of the rainbow, or are we too far gone? The Queer Crisis Collective's art piece does wonders at pointing towards the hollowness of Delta Airlines sporting a rainbow flag on their advertisements by placing their own picture next to theirs: corporate advertisements do not for a revolution make.

I would like to believe that there's somewhere over the rainbow for queer people uninterested in subsuming our lives, bodies and sexualities within the (white, patriarchical) capitalist machine. While the Flash Collective does a superb job at illuminating the hypocrisy of corporations using the rainbow flag, I'm left to wonder where we go from here. One unexpected result of this artistic intervention is that the piece has been adopted for leadership training by the United States People Living with HIV Caucus. As for the rest of us, however, perhaps we can take note of scholar Lisa Duggan's encouragement to continue our "friendly critique" of the mainstream LBGT movement and focus our energies on building a grassroots collective of people who love and care for one another outside the confines of the market. Maybe then we'll find our rainbow connection.

For more information on some of the artists involved in the project, visit the artist page of Avram Finkelstein and The Helix Queer Performance Network.