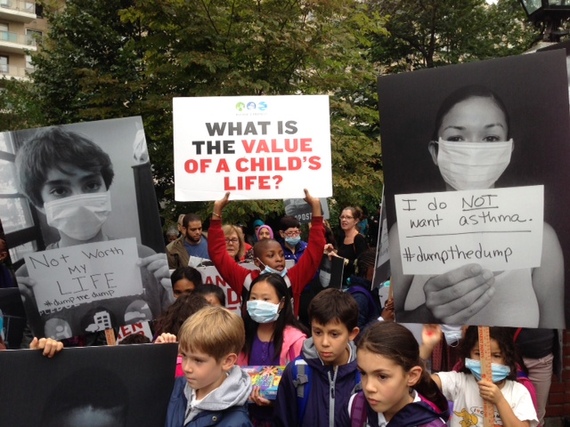 Children Protest Outside The Mayor's Mansion On Wednesday

1. To protect and improve the environment. 2. To reduce traffic deaths through his "Vision Zero" program. 3. To expand and improve education. 4. To improve housing for low-income families. I am a Democrat and fully support 95 percent of what he is doing. It therefore gives me no pleasure to report that he is breaking four of the big promises listed above.

Yesterday, in Part One of this series of four articles, I described how he's breaking his environmental promise. Today's broken promise will kill children.

In his introduction to the Vision Zero website, Mayor de Blasio writes that accidents happen to everyone, "but overwhelmingly, the deadly toll is highest for pedestrians -- especially our children and seniors. We won't accept this any longer. I make that pledge as a parent, and as your mayor."

Boom! There's the broken promise. He is building a massive garbage site right next to an athletic center used by 34,000 city children a year. One hundred to 500 garbage trucks a day will drive back and forth through the sports facility on an access road that literally bisects it. They will do this every day except Sunday.

To get onto the access road in the first place, the trucks must first cross a 30 foot stretch of sidewalk. The children must cross it too: the gym and pool is on one side, the playing field on the other.

Trucks and children will potentially intersect 60,000 times a year. (A minimum of 100 trucks a day will enter and exit over the sidewalk for a total of 200 crossings. This will happen about 300 days a year. This equals 60,000 potential fatal encounters.)

As the Vision Zero website tells us: "Being struck by a vehicle is the leading cause of injury-related death for children under 14." Almost all of the kids crossing in front of the trucks are under 14. They come from every borough. Lia Neal of Brooklyn, who won a bronze medal for swimming, trained here.

The 91st Street Marine Transfer Station (MTS) as the garbage dump is officially called, is being built in Yorkville just south of East Harlem. The dump is not just next to the athletic facility, but also opposite 1000 units of public housing (illegal were it not for "grandfathering").

Yorkville is the most densely residential area of New York City. It has two industries: hospitals and schools. The trucks will zig-zag through the neighborhood making many turns on narrow streets.

I don't know if you've ever driven a large vehicle. I have. It's like being half blind while wearing a neck brace. You can't twist around and see backwards. Your side mirrors, particularly the one on the left, are further away than in a car so it takes your eyes longer to get to them, meaning the time you're not looking out front is increased. What you see in the mirrors gives you some idea of what's going on behind, but not much. You have even less idea what's happening alongside you, in part because "alongside" is many feet below.

When pedestrians are killed by trucks it's usually when the truck is turning and the driver can't see behind and to the side as his rear wheels cut in closer to the curb. it is particularly hard to see children because they are shorter.

A DSNY (Department of Sanitation) driver, however, is not just driving "a large vehicle," he is driving a long, oddly-shaped, and incredibly heavy vehicle. Fully loaded, it weighs over 30 tons. The Mayor's SUV, even with his gigantic body inside it, weighs about three.

On the day the first garbage truck kills the first child, the man driving the truck will not be a well-rested chauffer driving a state-of-the-art SUV. He'll be an exhausted sanitation worker who rose before dawn, has driven a massive vehicle on congested streets for many hours, and is at the end of a mentally and physically strenuous shift. It will probably be raining or snowing, or one of those short days in winter when there's little light. Perhaps there'll be ice on the road, wind.

The boy or girl destined to die on this sad day will be amped up from exercise, fighting with another kid, or, if the weather is bad, rushing to cross the road and get back inside. Most likely it will be the truck's back wheels that kill the child. Often the driver doesn't even know he's killed someone until people on the street start to scream. I had the misfortune to witness such an accident when I was a child.

There is something that has not been spoken of before:

It is, of course, a tragedy beyond imagining to lose a child; but it is also a terrible thing to kill a child. Mayor de Blasio and DSNY boss Kathryn Garcia are not just putting children at risk, they're forcing their workers into a situation where they may do something that will haunt them forever.

If I was a DSNY driver, I'd go on strike before driving a garbage truck among so many children.

The second paragraph of the Vision Zero website says, "The City of New York must no longer regard traffic crashes as mere 'accidents,' but rather as preventable incidents that can be systematically addressed."

When someone's son or daughter is killed in Yorkville by a garbage truck, it will indeed not be an accident. It will be a predicted and preventable death.

There is a reason why modern, progressive cities create zones, loosely divided into residential and industrial. This garbage site (which is also in a flood zone and pressed up against a public park) has much the same footprint as the Empire States Building while the "factory" itself is larger than the big hall at Grand Central Station. This in a residential neighborhood? It is bizarre.

As explained in detail in this report, it is not even needed. It is a truck magnet. It is a disaster. Everyone in city and state government has been warned about the risk it poses to children. Many times.

Here's another warning, a VIDEO created by a mother whose child plays at the facility.

If you are a politician and ignore these warnings, you will pay a high price for this.

The state Department of Environmental Conservation (DEC) has to approve a permit renewal for the 91st Street MTS in the next couple of weeks, by October 14th.

If there is "newly discovered material information" or "a material change in environmental conditions" the request for renewal must be treated as a new application, which means the project has to be reconsidered.

The last permit was issued in 2009. Hurricane Sandy hit in 2012. It killed 44 people and cost the city 19 billion. Scientific research suggest climate change is happening far faster than was thought even a couple of years ago. The 91st Street Marine Transfer Station is being built almost six feet below the level suggested by FEMA.

This alone should trigger a new permit hearing, but if you want to see the full extent of this scandal, read "Talking Trash" a damning report on the dump which the city has been unable to refute. Here are just a few other changed circumstances:

Since the last permit was issued, the World Health Organization classified diesel as a carcinogen; new pollution monitors in the city showed that the area around the dump has possibly the worst air quality in the entire city and consequently the worst asthma rates; thousands of new apartments have been built; traffic patterns have never been adequately studied and have now changed since the loss of one to two lanes on 1st Avenue; and five new schools have opened in the area, including three large public schools and one special ed school.

A new permit application is mandatory under the law and citizens and scientists deserve to be heard. Insist upon this by writing to:

On Monday: HOW MAYOR DE BLASIO BREAKS THE EDUCATION PROMISE.